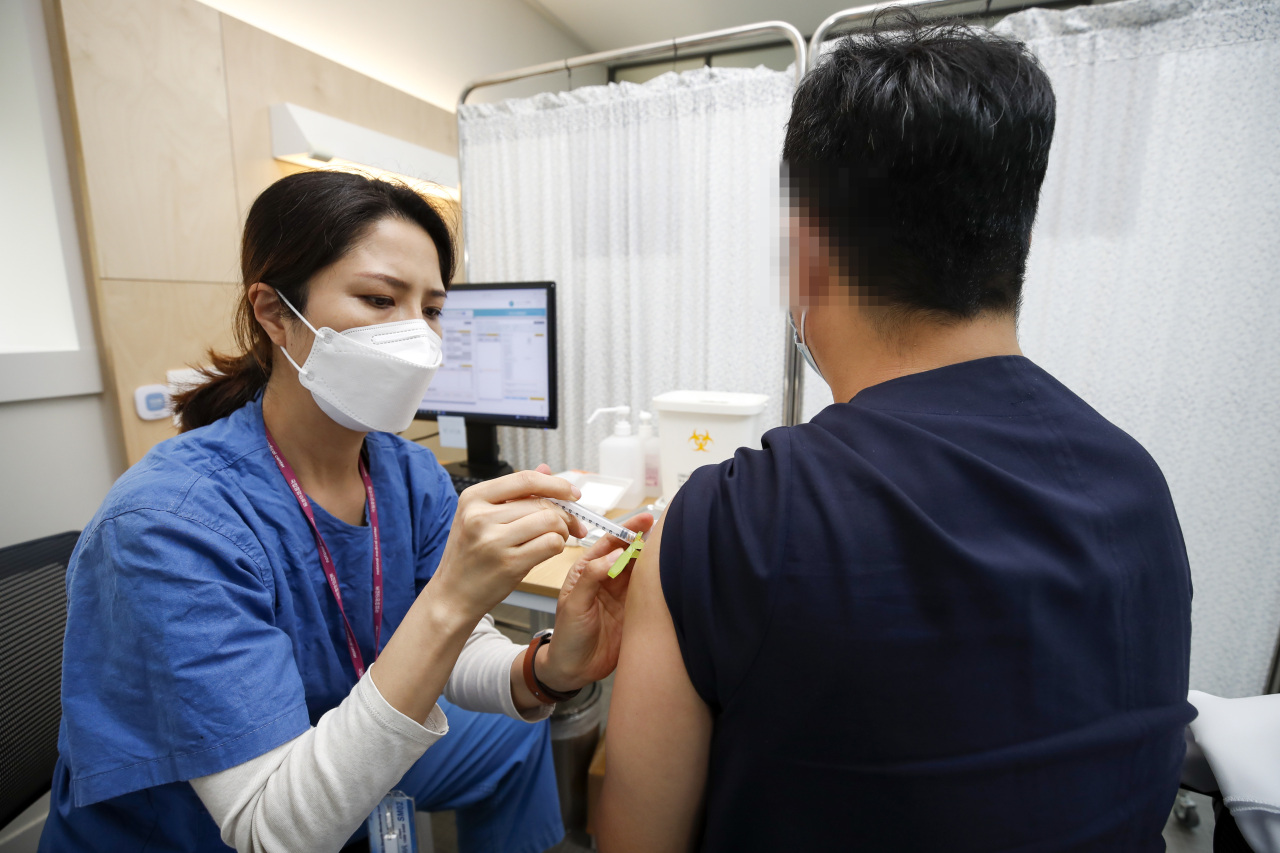 A health care worker at the National Medical Center in Seoul administers a dose of a COVID-19 vaccine on Tuesday. (Yonhap)
Wrongly administering COVID-19 vaccines into blood vessels instead of the muscles could be behind the serious side effects, some studies have suggested.

An Aug. 2 report published by the Journal of Korean Medical Sciences is one of the first in the country to suggest that technique known as aspiration -- which is pulling back on the syringe plunger before injecting the vaccine to ensure no blood vessel is accidentally punctured -- may provide better chances of avoiding side effects.

The report looked at Korea’s first and only fatal case of a rare blood clotting condition called thrombosis with thrombocytopenia syndrome, or TTS, in a 33-year-old man who received AstraZeneca’s vaccine. He died 19 days following his first vaccination in June, after developing blood clots in the brain called cerebral venous sinus thrombosis.

In making the suggestion, the report cited a June 29 preprint of an animal model study highlighting intravenous injection as a trigger for autoimmune reactions targeting platelets, which may result in TTS.

The preprint referenced in the paper, authored by German researchers, pointed to accidental intravenous injection as a “potential mechanism for post-vaccination TTS.”

“Hence, intramuscular injection, with aspiration prior to injection, could be a potential preventive measure when administering adenovirus-based vaccines,” it said.

Dr. Jerome Kim, director general of the International Vaccine Institute based in Seoul, said in an email response that he was “not sure the issue is intravenous injection.”

Although an intravenous injection “can generate different kinds of immune responses” from an intramuscular one, “if the issue were injection, you shouldn’t see differences between men and women, as well as age groups, with different vaccines,” he said.

Another broad area of concern, Kim said, was the appropriateness of the model used in the study. “The authors of the AstraZeneca manuscript say, ‘It is important to note that we used an animal model which inherently cannot fully recapitulate disease pathophysiology observed in humans,’” he said.

Still, some procedure to see that blood isn’t returned to the syringe, before making the intramuscular injection, was warranted, he said. “It isn’t much aspiration, just a check on whether blood comes back.”

Currently, the guidelines in Korea do not require health care providers to aspirate before giving a COVID-19 vaccination, according to Kim Ki-nam of the government’s immunization council.

“The vaccines are given into the middle of the deltoid muscle, which is a safe site for injection via the intramuscular route, free from major nerves or large blood vessels,” he explained.

Kim Hyun-jung, a nurse who gave the Korea Disease Control and Prevention Agency’s Commissioner Jeong Eun-kyeong both her AstraZeneca shots, agreed that aspiration was “not considered necessary” as there are no large blood vessels in the upper arm.

“Moving the needle unnecessarily could increase the pain in the recipient, and may lead to other administration errors,” said Kim, who works at a public health center in Cheongju, near the national disease control agency’s headquarters, in a brief phone call.

As of Sept. 30, the latest date for which the data is available, there were 56 confirmed cases of myocarditis, pericarditis, or both, after Pfizer’s vaccine in Korea, and seven after Moderna’s. Thirty-two out of the total 63 cases were in people under 30. One in his early 20s died.

Over the same period, three people in Korea were confirmed with TTS after their first AstraZeneca dose. Two were men in their early 30s, one of whom died, and the other a woman in her 70s.