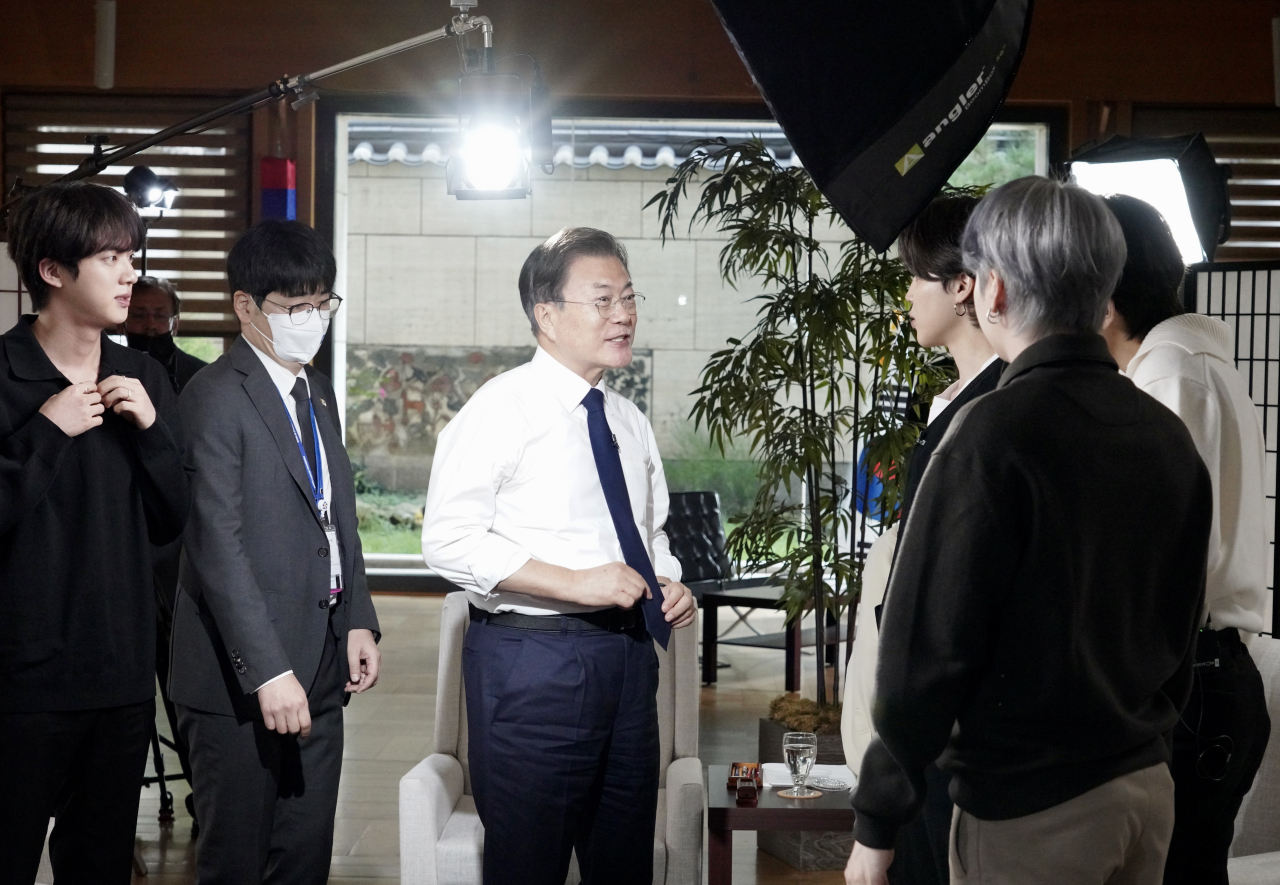 "Since BTS represents the younger generation and many young people relate to them, I believe they can spread awareness and empathy," Moon said in an interview with U.S. TV network ABC.

The interview, also attended by the seven members of BTS, took place on Tuesday, one day after Moon and the septet delivered a speech at the Sustainable Development Goals Moment (SDG Moment) event held on the sidelines of the annual U.N. General Assembly in New York.

Earlier reports said more than 1 million viewers had tuned in live to watch BTS' speech and pre-recorded performance of its hit song "Permission to Dance." BTS members were appointed by Moon earlier this month as special presidential envoys for future generations and culture.

"It's still hard to believe that we have been appointed special envoys and did a speech and performance. It felt like time had stopped," BTS member Jungkook said during the interview.

Another BTS member, RM, reiterated the group's message at the SDG Moment event.

"What is important is for people to first realize that this is a climate crisis and not just a (climate) change since we too have only recently come to realize that," he said when asked about his message to fans.

BTS members also renewed their call for people to get vaccinated against the new coronavirus.

"As eager as we are to perform, we hope the situation will get better soon and more people will get vaccinated so that conditions will improve enough for us to be able to perform," said J-Hope.

Jin noted concerns held by people over COVID-19 vaccines, but said progress can be made only when people overcome fears.

"We are all vaccinated, and I can also sympathize somewhat with people who fear vaccines and think it is only natural that they are afraid because it's something that didn't exist before. But I believe if we are afraid of the past, there won't be any progress in the future," he said.

Jimin weighed in with a hope for improved conditions.

"I hope that COVID ends quickly and we can get back to doing the performances we love."

"The song "Permission to Dance" is beautiful, and so is its choreography, but I believe it also delivered a message of unity that overcomes differences to people around the world," Moon said, while trying to do an iconic dance move from the song that is said to be based on international sign language for happy. (Yonhap)