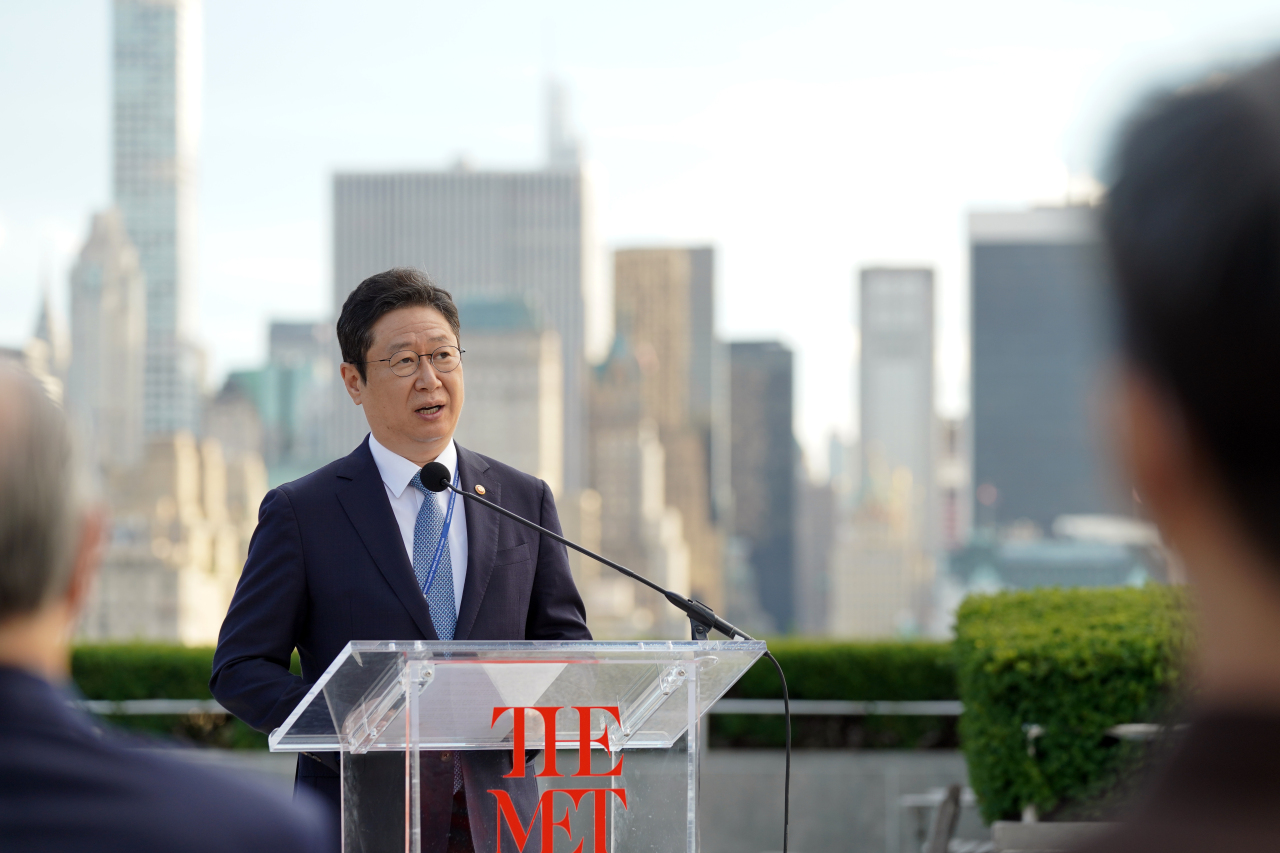 Culture Minister Hwang Hee on Thursday said the government will look into expanding the Arts of Korea Gallery at the renowned museum at a press event held with New York correspondents.

“The director and CEO of the Metropolitan Museum of Art suggested moving the Arts of Korea Gallery,” Hwang said at the meeting, following the visit to the museum with first lady Kim Jung-sook and megahit K-pop band BTS on Monday.

According to the Ministry of Culture, Sports and Tourism, the hall for the Arts of Korea Gallery is 165-square-meters wide, relatively smaller than the exhibition halls for China and Japan. It was established in 1998, funded by the Korea Foundation and the Samsung Foundation of Culture.

Hwang also added that the ministry is seeking to hold an exhibition at the museum with pieces from the art collection donated by the late Samsung chairman Lee Kun-hee and also some works at Leeum, Samsung Museum of Art.

In July, Hwang shared plans to exhibit the donated works at overseas art museums and galleries, including the Metropolitan Museum of Art in New York, along with some other big name institutions such as the Los Angeles County Museum of Art, Prado Museum in Madrid and the British Museum in London.

“Thanks to the art collection donated by Lee, we now hold grounds to negotiate with overseas museums on the same footing,” Hwang said, discussing the possibility of holding an exchange exhibition with modern and contemporary art works from the Met and Korean antiques.

Hwang also spoke on the aim to hold a new event to promote Korea, marking the opening of the New York Korea Center set for November.

“We will prepare a new type of event to promote Korea within the next year,” Hwang said.

Meanwhile, the Met plans to hold “Shell and Resin: Korean Mother-of-Pearl and Lacquer” from Dec. 13 to July 5 next year, organized by Associate Curator of Korean Art Eleanor Soo-ah Hyun.

The presentation will showcase the museum’s collection of Korean lacquerware from the 12th century to the present, including Chung Hae-cho’s “Rhythm of the Five Color Luster” (2013), gifted by the Korean government to the museum on Monday.