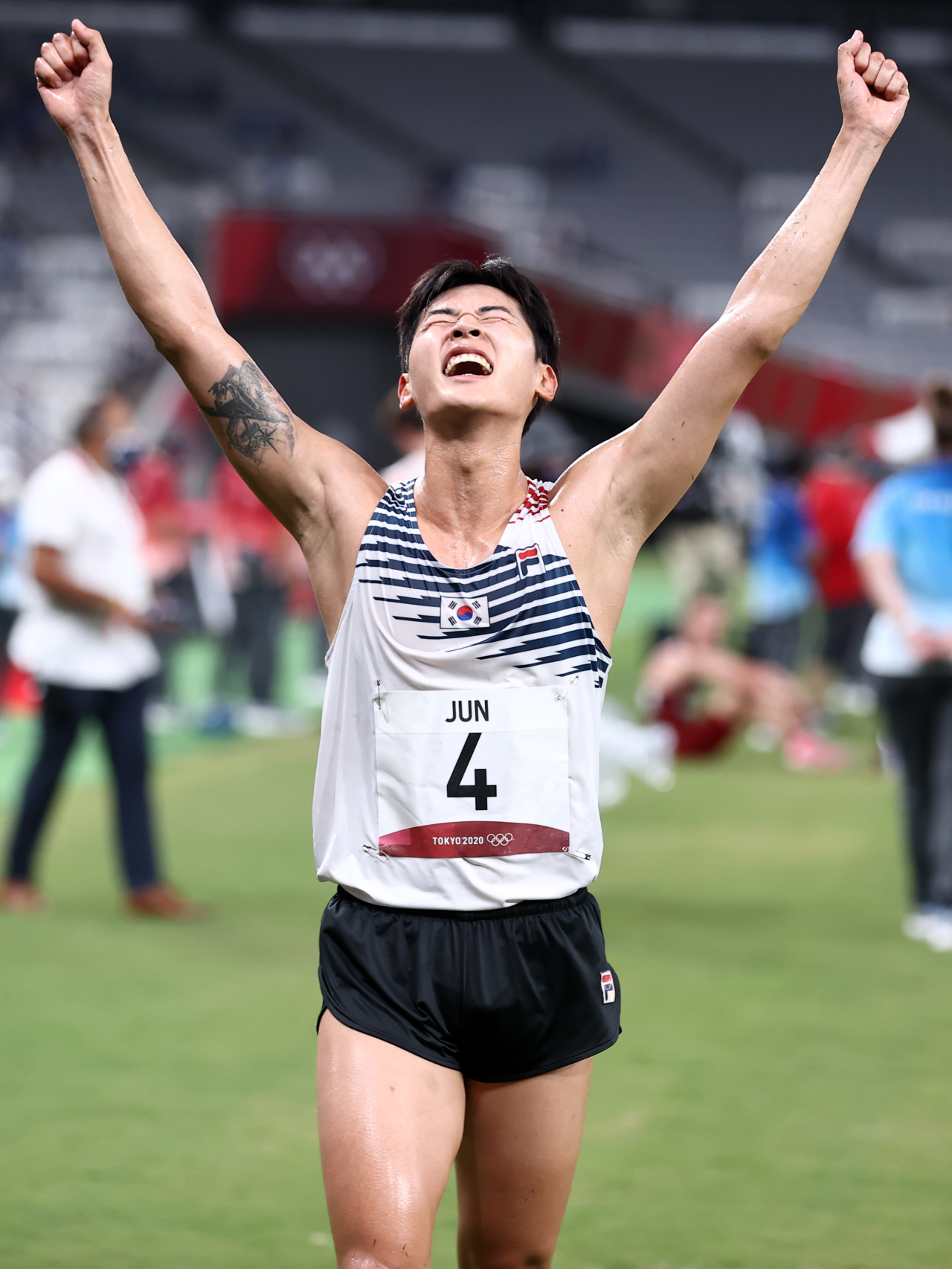 Jun Woong-tae of South Korea celebrates after clinching the bronze medal in the men's modern pentathlon at the Tokyo Olympics at Tokyo Stadium in Tokyo on Saturday. (Yonhap)
TOKYO -- It was nearly six decades ago in Tokyo that Choi Kui-sung became the first South Korean modern pentathlete to participate in the Olympic Games.

Now in 2021, the country finally has an Olympic medalist in the sport, as Jun Woong-tae captured the historic bronze medal at the Tokyo Olympics on Saturday.

"Not just anyone can win an Olympic medal. (Jun) has done such a wonderful job and I am proud of him," Choi said in a phone interview with Yonhap News Agency on Sunday.

Jun finished with 1,470 points for the bronze after competing in fencing, swimming, show jumping and laser run, which combines running and shooting. His teammate, Jung Jin-hwa, finished four points back in fourth place.

Modern pentathlon in South Korea has come a long way since Choi finished last among 37 participants in the 1964 Tokyo Olympics.

Choi had been competing in equestrian. He recalled that South Korea was pushing for unified teams with North Korea in some events for the 1964 Olympics. He decided he wanted to participate in an Olympic event where North Korea wouldn't send any athletes, and chose modern pentathlon, which included show jumping.

The Koreas didn't end up forming unified teams, but Choi stuck with modern pentathlon. He traveled to Japan a year ahead of the Olympics to learn modern pentathlon events other than show jumping.

"I was the only pentathlete from the country, and I had one official from our national Olympic committee who joined me as a coach," Choi recalled.

For most of Choi's administrative career, though, South Korea remained on the periphery of modern pentathlon. It wasn't until the turn of the century that athletes started winning medals at UIPM World Cups and world championships. By the time Choi retired in 2018, South Korea was being regarded as a potential medal contender in the Olympics.

"Modern pentathlon has been growing in South Korea because the national federation has been so stable and there are no factions or petty fights within," Choi said. "We've reached a level on par with other great powers and we should be able to stay there for a while. If the federation and athletes keep doing what they've been doing, then things will continue to get better.

"I'd love to see an Olympic gold medal (by a Korean pentathlete) before I die," Choi added. "If our athletes can get a bit better at fencing, then we will certainly see a gold medal three years later in Paris." (Yonhap)