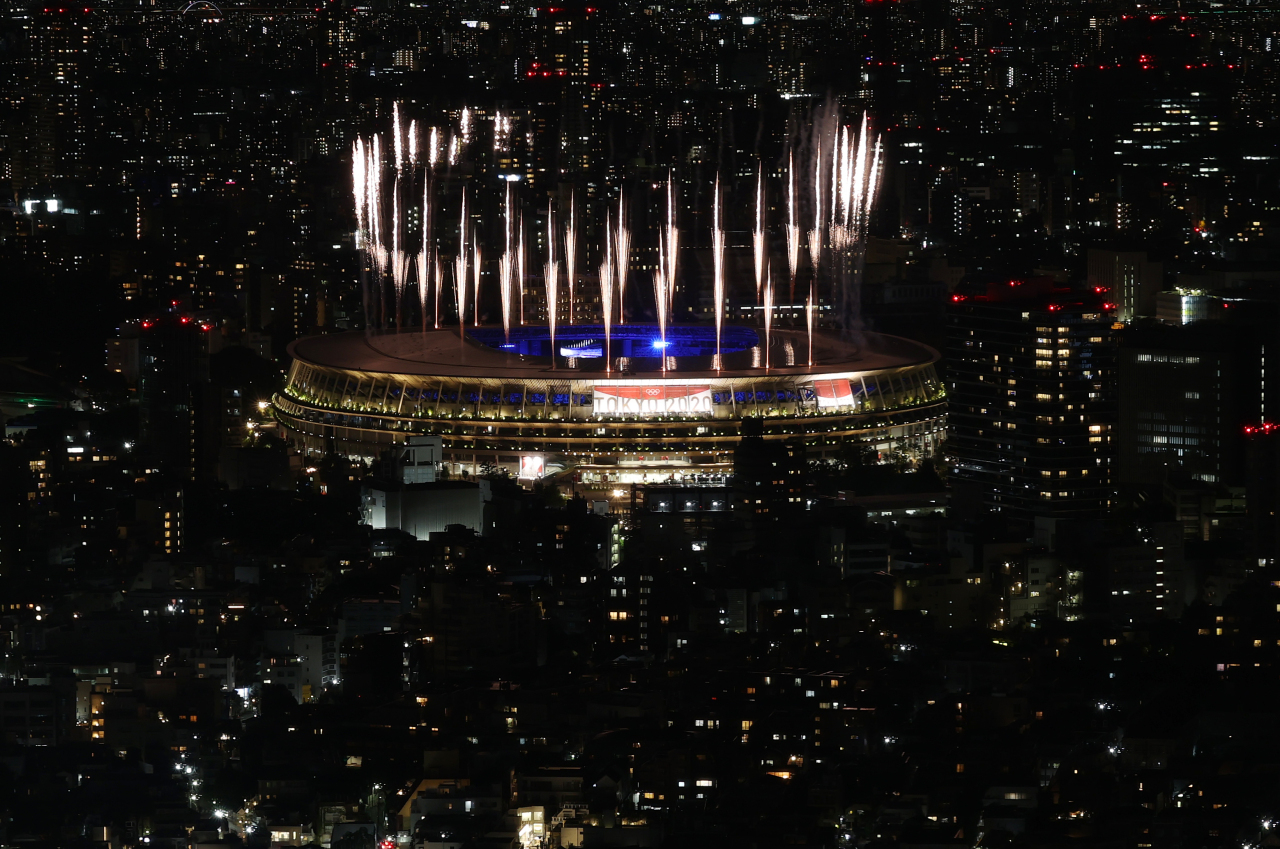 Fireworks go off at the National Stadium in Tokyo at the start of the closing ceremony for the Tokyo Olympics on Sunday. (Yonhap)

The Olympic flame that has been burning for the past two weeks in Tokyo was extinguished Sunday, closing the first Summer Games held during the global coronavirus pandemic with a celebration of great athletic feats.

That the Tokyo Olympics even happened, albeit one year later than scheduled, is an accomplishment in and of itself. The buildup to the multisport competition was met with skepticism from both home and abroad, with many wondering if it was feasible to bring over 11,000 athletes from more than 200 countries to a city struggling to contain the spread of the novel coronavirus.

COVID-19 cases reached daily record numbers in the Japanese capital during the Olympics, but with athletes undergoing regular testing while being inside an Olympic bubble, infection rates among them stayed low throughout the competition. There were no spectators at the Olympics, with only accredited media and team officials permitted inside venues, and that minimized athletes' contact with the local population.

South Korea won six gold medals and 20 medals in total to finish 16th in the medal race -- short of its goal of finishing in the top 10 -- but the most important number for the country may be zero: as in, zero positive case reported among its more than 300 athletes and officials.

Per health and safety protocols, athletes had to depart Japan within 48 hours of finishing their events to minimize infection risks and spread of the virus. South Korea's first gold medalists, An San and Kim Je-deok from archery's mixed team event, have been home for a week. They didn't get to celebrate the end of the Olympics with other South Korean athletes at the National Stadium.

Fortunately, South Korea did have a medalist from the final weekend available to carry the flag at the closing ceremony. Jun Woong-tae became the first South Korean modern pentathlete to win an Olympic medal on Saturday and represented the nation along with three other modern pentathletes and 30 officials at the ceremony.

The United States picked up three gold medals on Sunday to nip China by one, 39-38, finishing first in gold medal counts for the third consecutive Olympics.

Japan pleased its partisan fans by finishing third with 27 gold medals and 58 medals overall, both of them the country's highest ever at the Summer Olympics.

The Olympic Flag is now in the hands of Paris, the host of the next Summer Olympics in 2024. (Yonhap)