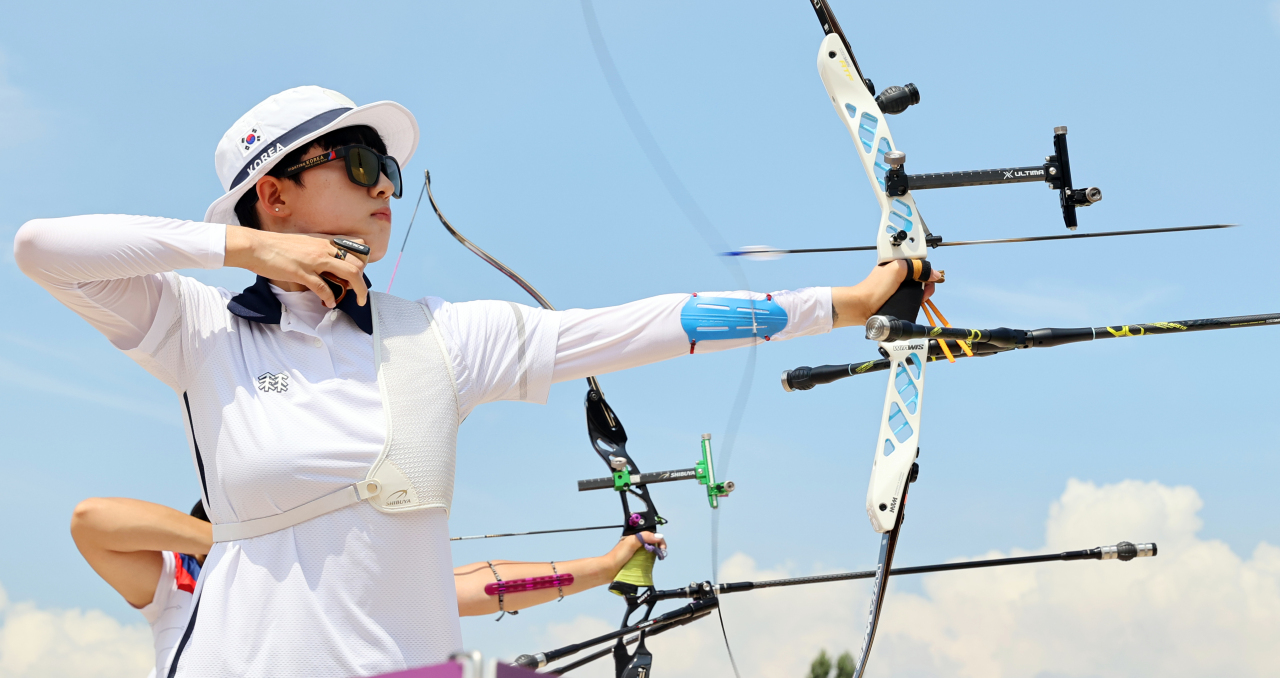 South Korean archer An San competes in the women's ranking round at the Tokyo Olympics at Yumenoshima Park Archery Field in Tokyo on July 23, 2021. (Yonhap)
South Korea may have received disappointing results at the Tokyo Olympics, which closes Sunday, recording its lowest gold medal haul of six in 37 years. But some of its players pulled off their best performances at the world's biggest sporting competition, breaking one Olympic record and setting four national records.

Archer An San, who won three of the country's six gold medals in Tokyo, set new Olympic records in the women's ranking round on July 23 with a total of 680 points.

It is the first time the record has been broken in 25 years at the Olympics since Lina Herasymenko of Ukraine shot 673 points at the 1996 Atlanta Summer Games.

In swimming, regarded as one of the most infertile disciplines in South Korean sports, three new national records, including one Asian record, were set, despite no podium finishes.

In the men's 200-meter freestyle heats on July 25, Hwang Sun-soo posted a new South Korean record time of 1:44.62 and cruised to the final by finishing sixth overall the next day. He became the first South Korean swimmer since Park Tae-hwan in 2012 to reach an Olympic final.

The 17-year-old swimmer swam faster in the men's 100m freestyle on July 28. He set an Asian record time of 47.56 seconds and became the first man from the continent to even reach the 100m freestyle final since Atsushi Tani of Japan in 1956.

His teammate Lee Ju-ho also did a great job in the men's 200m backstroke at the Tokyo Olympics.

South Korea also celebrated a new national record in athletics, while few Korean runners and jumpers have competed at the Olympics.

In the men's high jump finals on Aug. 1, Woo Sang-hyeok cleared a Korea-high 2.35m to finish fourth. Although he closely missed the podium, he notched the highest rank at an Olympic tournament ever by any South Korean field and track athlete.

In addition to those record setters, other ambitious players also blazed a trail in events that have remained out of reach of Korean athletes for decades, at the Olympics.

Jun Woong-tae captured the bronze in the men's modern pentathlon at the Tokyo Olympics on Saturday, making history to be the first South Korean to win a medal in the five-sport event that made its Olympic debut in 1912.

Before Jun, three South Korean athletes, including his teammate Kim Se-hee, had finished in 11th place in the Olympic pentathlon event.

Yeo Seo-jeong, 19, also added her name to the history of Korean gymnastics. She won the bronze medal in the women's vault on Aug. 1, becoming the first female Korean gymnast to stand on the Olympic podium.

In sailing, Ha Jee-min reached the 10-man finals of the men's laser on Aug. 1 for the first time as a Korean athlete at the Olympics.

Park Hee-jun and Seo Chae-hyun made their first appearances in karate and sport climbing, respectively, both of which were newly debuting sports at the Tokyo Olympics.