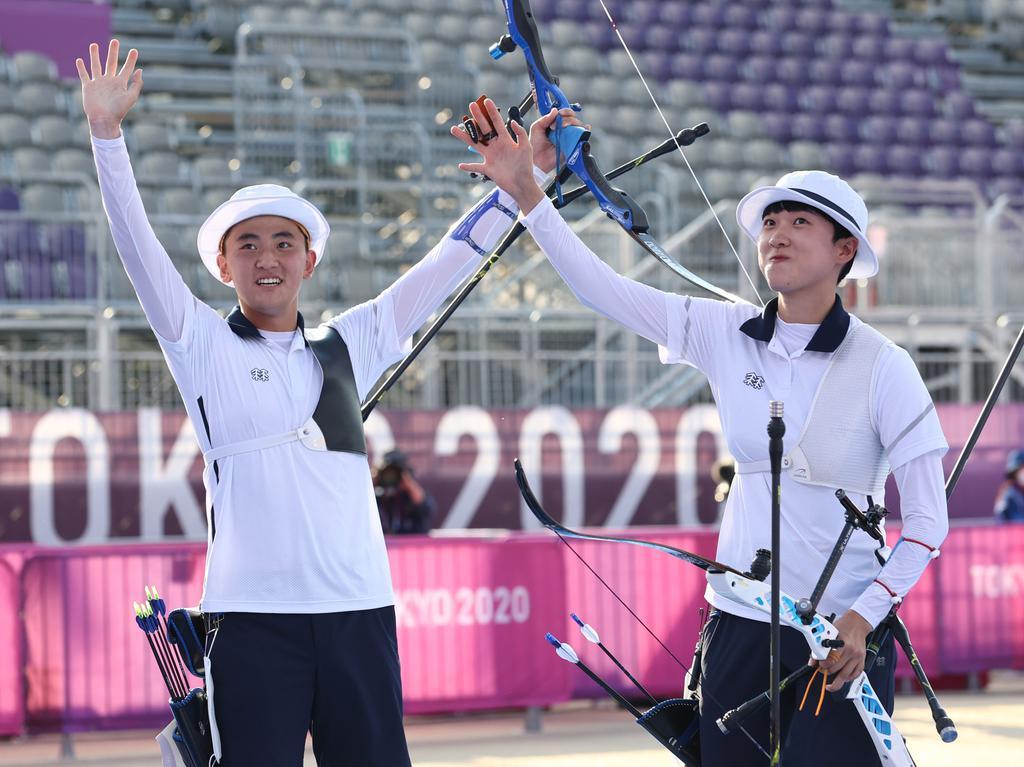 In fact, it happened just hours before the opening ceremony on July 23.

An San set an Olympic record score of 680 out of a maximum 720 to finish first in the women's archery ranking round. As the top seed, the 20-year-old would represent the country in the inaugural mixed team event, alongside Kim Je-deok, the 17-year-old who won the men's ranking round.

The fiery Kim fist-pumped and screamed his way into the nation's consciousness. An offered stoicism of someone who knew exactly how good she was and who was fully intent on sharing that knowledge with everyone else on the biggest stage.

An and Kim combined for the mixed team title. An later won the women's team and individual gold medals to become the first triple champion of the Tokyo Olympics. She also became the first archer in Olympic history to snap up three gold medals in a single competition.

Kim added the men's team title to a list of accomplishments that will only grow from here.

The archers dominated the headlines for South Korea early in the Olympics. The men's sabre fencing team delivered the country's first gold medal from a sport other than archery, and the quartet of Kim Jung-hwan, Gu Bon-gil, Oh Sang-uk and Kim Jun-ho shot to quick stardom thanks in no small part to their movie-star good looks.

The women's volleyball team took over in the latter portion of the Olympics. In a span of just a few days, South Korea went from a team destined for an early exit to a team of destiny. It defeated host Japan in a five-set nail-biter to book a ticket to the knockouts and then took down world No. 4 Turkey in the quarterfinals.

The storybook ended with losses to Brazil in the semifinals and to Serbia in the bronze medal match. But South Korea was still celebrated, with captain Kim Yeon-koung embodying the team's collective feistiness and relentlessness.

That was in stark contrast to performances by the men's football team, which lost to Mexico 6-3 in the quarterfinals and didn't even sniff a medal.

The baseball team also failed to win a medal, after falling to the Dominican Republic in the bronze medal game by 10-6. It only gave more ammunition to the fanbase angered over off-field misconduct by several Korea Baseball Organization players, including two who withdrew from the Olympic team.

But there were other athletes who were celebrated despite missing out on medals.

Freestyle swimmer Hwang Sun-woo made the finals in the 100m and 200m races. Hwang set an Asian record in the 100m and became the first swimmer from this continent since 1956 to reach an Olympic final. The 18-year-old finished fifth.

In the 200m, Hwang set a national record and ended in seventh in the final.

Male high jumper Woo Sang-hyeok finished fourth with a new South Korean record height of 2.35m. The 25-year-old embodied the kind of "medal isn't everything" attitude that has come to define athletes of a new generation.

In diving, Woo Haram ranked fourth in the men's 3m springboard, the best Olympic showing by a South Korean diver.

High jumping and diving have been niche sports in South Korea, events that casual sports fans may or may not follow during the Olympics. Modern pentathlon isn't even in that category, though it could change after Jun Woong-tae won bronze in the men's competition.

He became the first South Korean to win an Olympic medal in his sport, made up of fencing, swimming, showjumping, running and shooting.

Notable second-generation athletes won medals in Tokyo. Artistic gymnast Yeo Seo-jeong won bronze in the women's vault, joining her father, Yeo Hong-chul, who won silver in the men's vault in 1996, as the Olympic medalists in the family.

With Shin standing on the top of the podium and Yang left on the outside looking in after missing the final, the symbolic passing of the torch was complete.

Yang was one of a few heroes from the 2012 Olympics who fell on hard times in Tokyo.

Pistol shooter Jin Jong-oh, a double gold medalist from London with six Olympic medals overall, went home empty-handed this time. About a month away from his 42nd birthday, Jin may have competed in his last Olympics.

Lee Dae-hoon, one of the greatest taekwondo practitioners of his generation, announced his retirement after losing in the bronze medal match in the men's 68kg class. An Olympic gold was the only major prize missing in his career, which included a bronze in 2016 and a silver in 2012.

Three of South Korea's most beloved Olympians took an unexpected fall from grace in Tokyo, but they will step aside knowing the country's pipeline of athletic talent isn't about to dry up. (Yonhap)