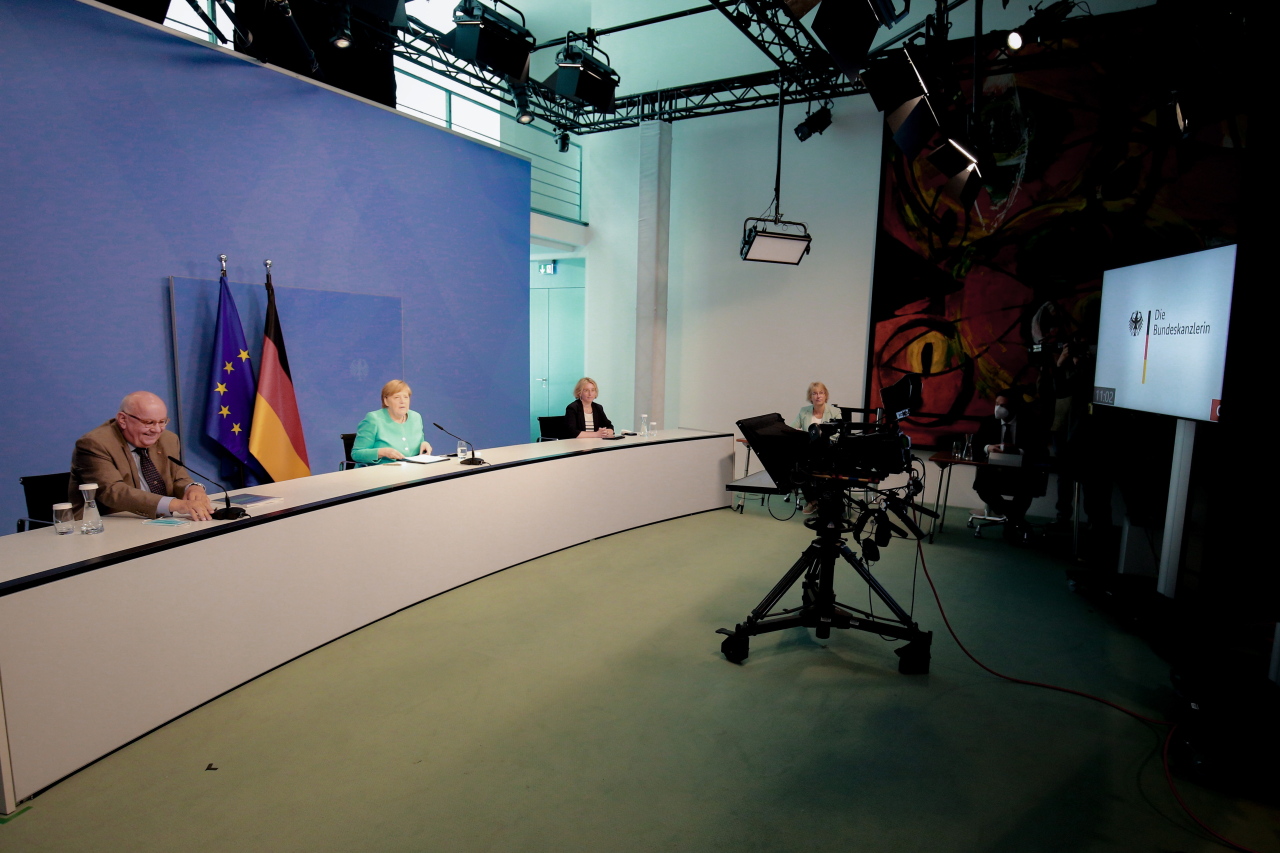 German Chancellor Angela Merkel (middle) attends the virtual handover of the final report of the 'Future Commission for Agriculture' at the Chancellery in Berlin, Germany, on Tuesday. (EPA-Yonhap)
BERLIN (AP) -- Chancellor Angela Merkel's party on Tuesday presented a campaign for Germany's September election that portrays would-be successor Armin Laschet as a conciliatory, experienced leader and mixes classic center-right themes with portraying the fight against climate change as an economic opportunity.

Door-to-door campaigning will take place "perhaps more at the garden fence'' this time, Ziemiak said, and there will be hybrid offline-online events rather than crowds of thousands at indoor rallies.

"We must set an example by keeping to what we expect of others,'' he said.

The center-right Union bloc, which the CDU dominates, released a platform last month that pledges to boost the German economy without raising taxes and to make the country "climate-neutral'' by 2045 while still preserving industrial jobs.

The party's new poster campaign features Laschet, the governor of Germany's most populous state and a centrist figure in the outgoing chancellor's mold, with the slogan "Together for a modern Germany.''

"He is the convincing politician who can lead people together,'' Ziemiak said. He made clear that one plank of the party's message is risking "no experiments,'' such as the environmentalist Greens' Annalena Baerbock becoming chancellor.

Other posters address issues such as security, a classic CDU theme, and climate change _ under the slogan "protecting climate, creating jobs.''

"We want the question of climate neutrality to become something positive _ something positive in terms of exports, of securing jobs and the creation of new jobs,'' Ziemiak said. "You don't have just to exit everything _ you also have to get on board new technologies and create new climate-neutral growth.''

Merkel and Markus Soeder, the leader of the CDU's sister party who battled Laschet in April  for the nomination to run for chancellor, will appear at the campaign's opening and closing events, Ziemiak said. He didn't specify dates.

Merkel announced in 2018 that she wouldn't seek a fifth four-year term as chancellor. The Union bloc is currently leading polls after a rough patch earlier this year.