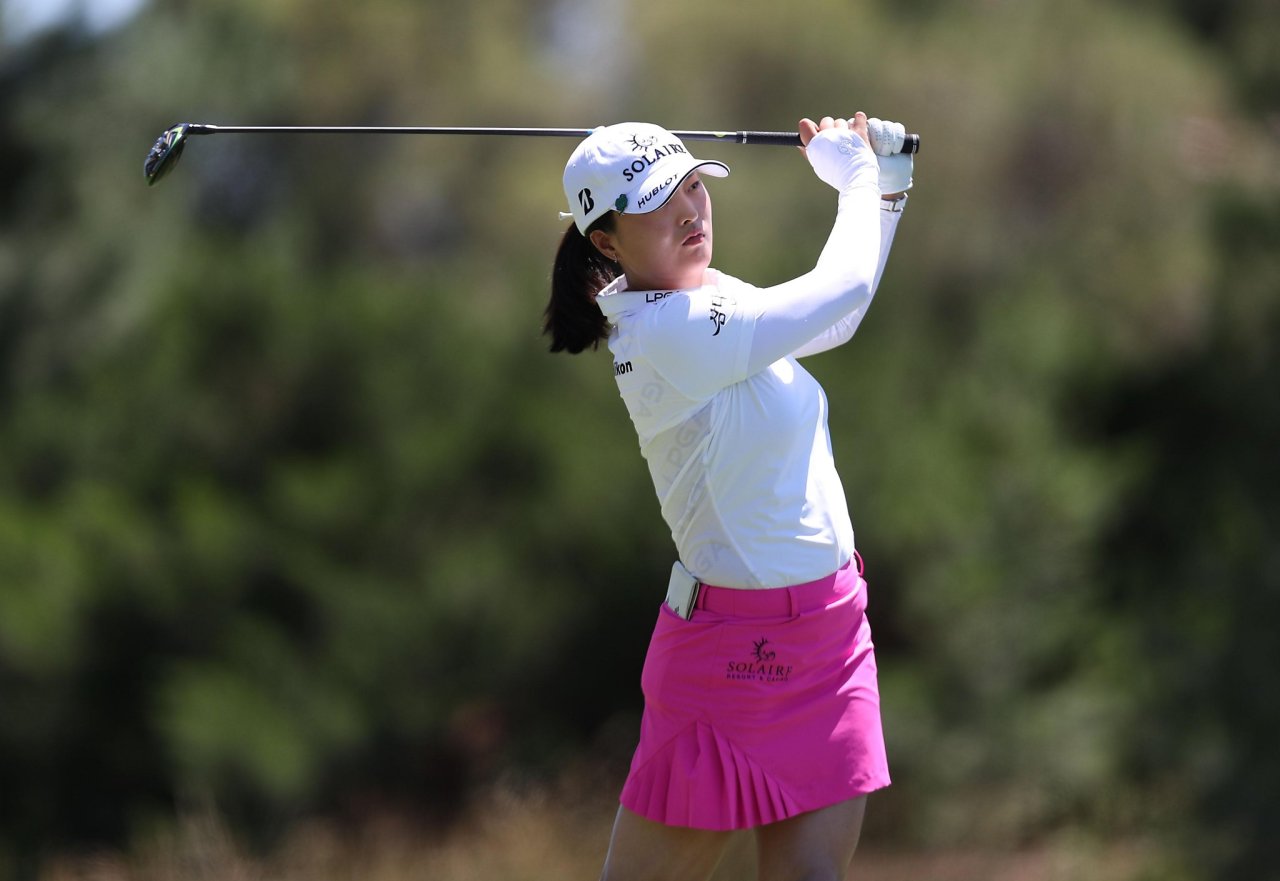 In this Getty Images photo, Ko Jin-young of South Korea tees off on the fourth hole during the third round of the Bank of Hope LPGA Match Play at Shadow Creek Golf Course in Las Vegas last Friday. (Getty Images)
South Korean female golfers will try to crash the party at the American national championship for the third straight year this week.

The US Women's Open, the second major tournament of the LPGA season, will tee off in San Francisco on Thursday, with 20 South Koreans in action.

The Lake Course at the Olympic Club, the par-71 layout at 6,547 yards, will provide the stage for the best women golfers that South Korea can offer, including the top three in the world rankings: Ko Jin-young, Park In-bee and Kim Sei-young.

The 2020 tournament was played in December, rather than its usual time slot of June, because of the pandemic-related postponement. It's back to the regular schedule this year and Kim A-lim, the surprise winner last year, gets a chance to defend her crown after about six months.

The last player to win consecutive US Women's Opens is Karrie Webb in 2000-2001.

Kim came out of nowhere to capture last year's championship. She had been playing on the Korean LPGA Tour, but thanks to the major title, Kim earned full-time playing privileges on the US circuit. She has missed three cuts in five tournaments this year with one top-10.

Kim talked on Monday about how winning the US Women's Open changed her life, saying the experience made her realize that dreams can come true.

"At first, I couldn't believe I won," Kim said. "Then I was able to challenge myself more. I am able to dream a bigger dream."

Ko has posted four top-10 finishes in six tournaments this year but was knocked out early in the Bank of Hope LPGA Match Play last week.

Still, Ko said she's pleased with the state of her game at the moment.

"I am playing well. My swing, putting or short game, everything is not bad," Ko said. "I think I'll be prepared on Thursday."

Ko, a co-runner-up by one stroke last year, said the hilly Lake Course will be tough for all players, but she wasn't going to back down from the challenge.

"I think fairways are so narrow on this course, so the important thing is to keep the ball on the fairway," said Ko, who said she studied the course by watching a YouTube clip. "Greens are small too. The wind is going to be tougher than other courses. It's going to be fun."

Park In-bee, a two-time champion playing in her 15th US Women's Open, said Tuesday she was looking forward to playing on the difficult course in challenging conditions.

"I think it's just (that) my game really suits the tough golf courses, and probably I'm pretty calm on the golf course too," Park said, when asked why she has done well at US Opens. "Whatever happens on the golf course, I kind of manage myself to stay calm no matter what happens. This golf course definitely needs some patience. The course is going to play tough. It's going to be windy, cold, and we're going to have to hit some fairways on this golf course. It's almost an automatic bogey when you go in the rough." (Yonhap)