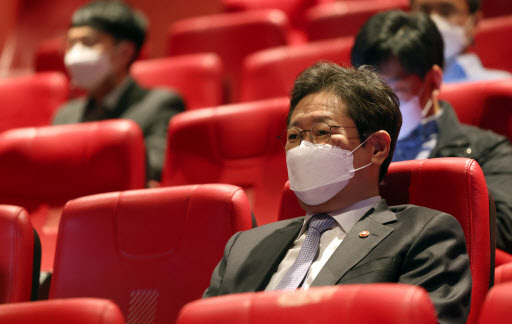 “This film is directed by a renowned movie director, who made films ‘The King and the Clown’ and ‘The Throne,’ but there are not many in the audience. This weighs on me,” Hwang said. “The Culture Ministry will do its best to create an environment in which movie lovers can come back to theaters more actively.”

According to the film council, as of Tuesday 184,743 people had watched “Book of Fish” since it opened March 31.

“The movie distribution environment has been changing drastically in recent years. However, the theater experience is still meaningful and important,” Hwang said.

Hwang added that he expected theaters to become a space for new experiences through the application of new technologies.

During his visit to the theater, Hwang also talked about his plans to support the expansion of South Korean content into the Chinese market.

“I think that by sharing movies and dramas, people of the two counties can eventually reach a common ground,” Hwang said.

Hwang then discussed his plans to visit China soon, this year being the year of Korea-China cultural exchange.

“In May or June, I would like to go to China to talk about tourism as well as movies and dramas,” he said, adding that preparations were already underway.

Hwang recently had a meeting at the Chinese Embassy and briefly talked about exporting movies and dramas, he said.

Details concerning Hwang’s visit to China have not been decided, according to the Culture Ministry on Wednesday.

“As far as we know, the minister is currently making contact through diverse channels to have a meeting,” a Culture Ministry official said.

In response to Hwang’s proposed visit to China, Megabox CEO Kim asked for support in finding ways to export more Korean movies not only to China but also to Southeast Asian countries.

Meanwhile, the total number of people who watched movies in theaters during the first quarter of this year totaled 8.15 million, a 67 percent drop compared with the same period last year, according to KOFIC.

The top three movies in terms of audience numbers in the first quarter of this year were Disney-Pixar’s “Soul,” Japan’s animation “Demon Slayer: Kimetsu no Yaiba the Movie: Mugen Train” and American film “Minari,” which drew around 4.5 million viewers in total, according to KOFIC’s box office data. In contrast, in the first quarter of 2020 over 4.75 million moviegoers watched “The Man Standing Next.”