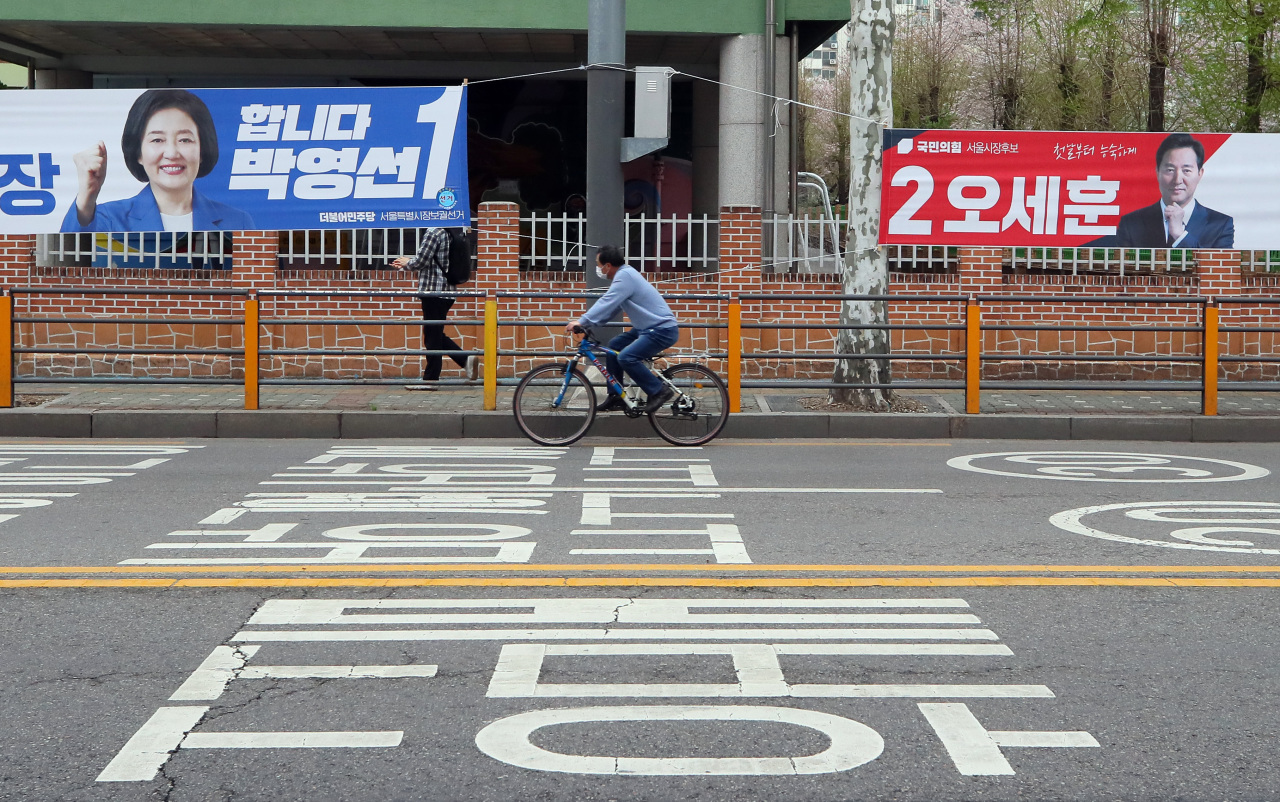 Campaign banners are installed by a motor road in Gwangjin-gu, eastern Seoul, on April 3. (Yonhap)
Concerns over the environmental impact of elections are once again rising in the wake of Wednesday’s by-elections in Seoul and Busan, with rival election campaigns producing tons of trash. Only a fraction is likely to be recycled.

Environmentalists are seeking legislative changes to prevent the use of nonrecyclable banners and placards as voters flock to online channels when making their political choices. The move could help the country become more eco-friendly and could make campaigns fairer for candidates who can’t afford the expense.

Local activist group the Korea Zero Waste Movement Network calculates that the country will be left with more than 16,000 banners when the mayoral by-elections end, with 10 candidates running for the Seoul mayoral seat and five candidates running in Busan.

In Seoul, the candidates will install a combined 12,720 banners throughout the city. In Busan, the number will reach 3,492.

Considering that 12 candidates announced bids for the Seoul mayoral seat and six registered in Busan, the number of banners is likely to be greater than what the Korea Zero Waste Movement Network projected.

“On top of spoiling the view, these advertisement banners installed every election made with plastic do not decay well when buried and release toxic materials into the air when burned,” the activist group said in a statement last month.

“Despite that, most of these banners are buried or burned after use, and using these banners creates trash, wastes our resources and releases carbon dioxide.”

The banners are made of polyvinyl chloride and other synthetic fibers, which are generally not recyclable and do not break down easily. Eco-minded groups have called their use a setback to environmental goals, but the problem has largely been ignored when it comes to campaigning.

According to the Ministry of Environment, 1,700 tons of campaign banners were used for last year’s parliamentary elections, of which only 24 percent was recycled. For the 2018 local elections the amount reached 9,220 tons, and only 33.6 percent of that waste was recycled.

The country spent 2.7 billion won ($2.42 million) on managing the unrecycled plastic waste for the 2018 elections and 500 million won to dispose of banners used during last year’s parliamentary elections.

To combat the uncontrolled generation of plastic waste for the sake of elections, eco-minded experts ask the country to introduce legislation that would prevent candidates from using plastic banners altogether. They stress that few people care what’s written on the banners anyway.

“The trend has changed in a way that people look at articles and campaign promises online rather than merely standing in front of these banners,” said Hong Su-yeol, head of Resource Recycle Consulting, who believes election campaigns should be more directed toward online channels.

“These banners don’t do much even though political parties want to believe they are effective in drawing attention to their candidates. This inefficiency only comes back as nonrecyclable waste in our hands.”

Yet candidates and their political parties cannot easily give up on using banners, as that would mean not reaching out to voters while their competitors continue to do so -- whatever the reason may be.

The candidate said he opted not to use plastic banners as he wanted to represent the zero waste movement as a mayoral candidate and reduce the amount of post-election waste as much as possible.

“Election campaigns can be practiced without using single-use pamphlets or plastic banners,” Son said in an interview with economic newspaper Money Today earlier this month.

“I have been attaching my name and my number on my vest as a campaign outfit to continue using the vest after the election.”

Some environmental activists ask for changes to the Public Official Election Act to have the National Election Commission send out text messages or emails to eligible voters about all the candidates’ campaign promises.

The move would also make the campaigns fairer and more equitable for candidates from all backgrounds, as it would lift a financial burden from their shoulders.