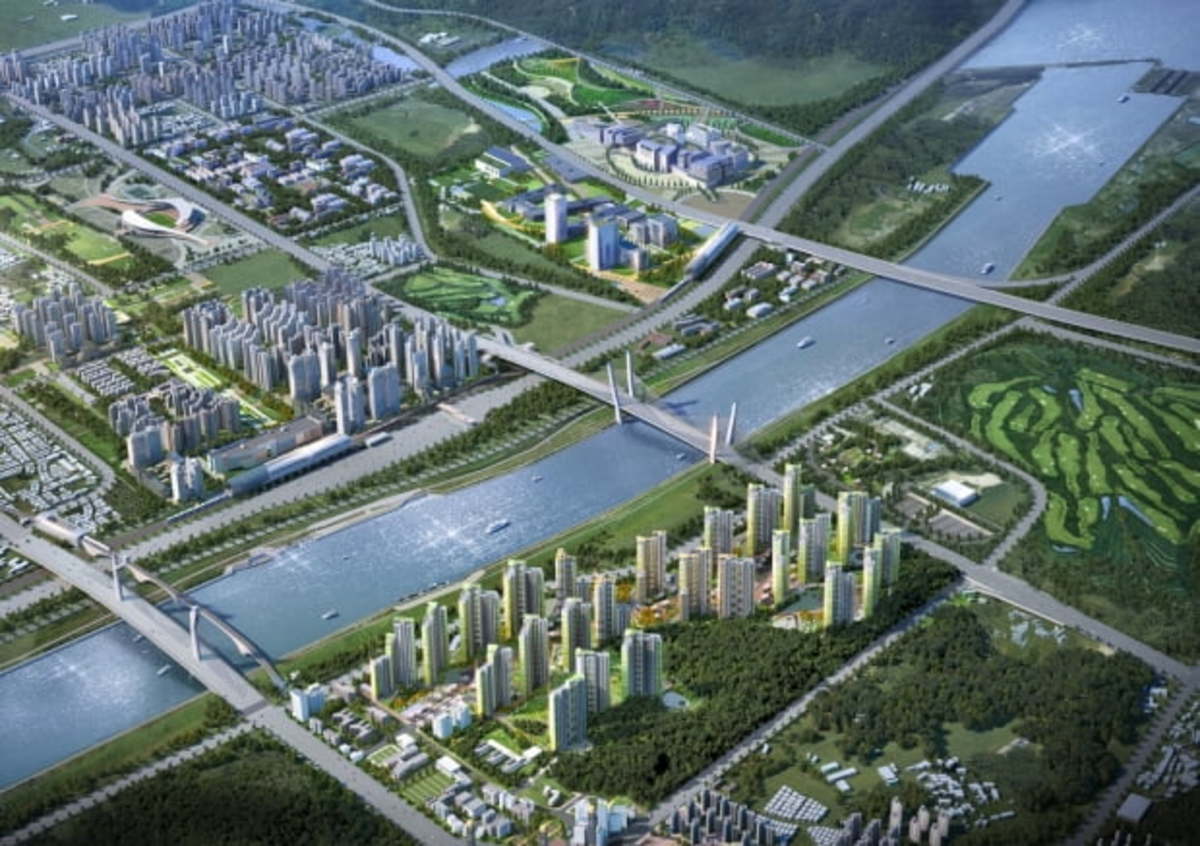 This image, provided by the Incheon Metropolitan Government, shows an illustration of a city development project in Seo Ward. (Incheon Metropolitan Government)
INCHEON -- Police said Monday they have sought warrants for the arrest of two officials of the state housing developer, Korea Land and Housing Corp. (LH), for the first time since they launched an investigation last month into allegations of land speculation by LH employees.

The Gyeonggi Nambu Police Agency said it requested a warrant on Friday for the arrest of an LH official suspected of using insider information to buy multiple plots of land, mostly in Gwangmyeong, southwest of Seoul, before the area's designation as a public housing development site.

The purchases were made between March 2017 and December 2018 under the names of 36 people, including the suspect's family members and acquaintances, according to the police.

The official worked in an LH department in charge of the development project in early 2017, with responsibilities that included reviewing development restrictions and deciding when to announce the area's designation as a public housing development site.

The second suspect worked for LH's regional headquarters in North Jeolla Province when he bought real estate in Wanju of the same province in 2015 under his wife's name, according to the Jeonbuk Police Agency, which requested a warrant for his arrest Monday.

The official was reportedly in charge of public housing projects in Wanju until recently.

The officials' arrest is being sought as the central government has been conducting a far-reaching probe into allegations of land speculation by LH officials and other public sector workers nationwide.

A government probe team led by the police said Monday it has begun to investigate in earnest allegations of property speculation against five National Assembly members.

The team completed questioning of the accusers last week and is in the process of verifying information it obtained, Choi Seung-ryul, a senior police official, told reporters, adding, "It will be some time" before the lawmakers in question are personally subjected to the investigation.

The LH scandal has rocked the nation at a time when public discontent over soaring home prices is running high.

Earlier Monday, the Incheon Metropolitan Police said investigators raided five locations in connection with a probe into possible land speculation by a former Incheon council member during his time in office.

The raids were conducted on the 61-year-old's home, related offices at Incheon City Hall and the Incheon Metropolitan Council, and two realtors' offices in the city located 40 kilometers west of Seoul.

The former council member has been booked on corruption charges amid allegations that he used undisclosed information to purchase 1.96 billion won ($1.74 million) worth of land in Incheon's Seo Ward in August 2017, two weeks before the area was approved for a city development project.

Of the total sum, he reportedly took out 1.68 billion won in loans.

The suspect, who chaired the council's construction and transportation committee at the time, later sold the land to a city developer in exchange for a piece of land in a shopping district.

"We are investigating the case on suspicion that (the former council member) bought real estate using secrets learned through work," a police official said, adding that the suspect will be summoned soon for questioning following an analysis of the seized documents and materials.

The former lawmaker has denied the allegations against him, telling Yonhap News Agency in an interview last month that the development project had been reported in the press before he made the purchase.

Police said they are also looking into possible speculative behavior in the suspect's other land purchases in Incheon. (Yonhap)