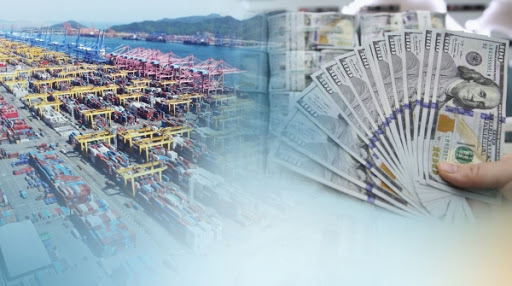 South Korea's exports rose 9.5 percent in February from a year earlier to extend their gains for the fourth consecutive month on robust shipments of chips, autos and other key products, data showed Monday.

Exports came to $44.8 billion last month, compared with $40.9 billion a year earlier, according to the data compiled by the Ministry of Trade, Industry and Energy.

Imports rose 13.9 percent to $42.1 billion, resulting in a trade surplus of $2.71 billion. It marked the 10th consecutive month for the country to post a trade surplus.

The latest figure slightly exceeded market expectations. According to a poll by Yonhap Infomax, the financial arm of Yonhap News Agency, the country's February exports were expected to have risen 8.9 percent on-year.

In January, exports expanded 11.4 percent, also on the back of chips and automobiles.

Experts say the global COVID-19 vaccination programs are expected to speed up the recovery of exports this year. South Korea also started its own inoculation campaign Friday.

Chips led the overall gain in February, with their outbound shipments expanding 13.2 percent on-year to $8.3 billion, rising for the eighth consecutive month. They accounted for 18.2 percent of the country's total exports.

The growth was largely attributable to strong demand from data centers and mobile manufacturers.

Overseas sales of automobiles also shot up a whopping 47 percent to $3.5 billion, as demand for premium models, including SUVs and eco-friendly automobiles, continued to remain strong.

The recovery of global crude price lent hands to exports of petrochemical and petroleum products as well.

Shipments of petrochemical products increased 22.4 percent on-year in February, while those of petroleum goods shed 15.2 percent over the period, which marked the smallest contraction since April.

On the back of the strong demand for COVID-19 test kits, the bio health segment enjoyed 62.5 percent growth in outbound shipments, expanding for 18 consecutive months.

Other winners included displays, whose shipments shot up 19.1 percent on the back of the recovery of the smartphone industry.

Exports of secondary batteries gained 10.1 percent on the back of the environment-friendly policies rolled out by the new US administration.

Sales of ships edged up 4 percent as they gradually recovered from the aftermath of the pandemic.

Outbound shipments of computers, meanwhile, edged down 4.1 percent after reporting a whopping 89 percent growth in the previous year.

By destination, exports to China jumped 26.5 percent to $11 billion, as the recovery in the world's No. 2 economy led to more demand for chips and machines.

Exports to the United States gained 7.9 percent to $6.3 billion, as Americans purchased more cars as they refrained from taking public transportation amid the COVID-19 pandemic. The vaccine roll-out rekindled consumer sentiment as well.

The two countries, meanwhile, represent around 40 percent of the combined exports of Asia's No. 4 economy.

Exports to the European Union soared 48.2 percent on the strong demand for the virus test kits, along with eco-friendly cars.

Sales to Southeast Asia, on the other hand, lost 7.3 percent on-year in the month due to the sluggish recovery in the textile segment.

Amid the prolonged trade row with Japan, exports to the Asian neighbor also slipped 2.8 percent as the virus pandemic led to delays in its facility investment.

In 2020, the country's outbound shipments came to $512.8 billion, down 5.4 percent from 2019. The South Korean economy, Asia's fourth largest, suffered a 1 percent retreat last year, marking the sharpest-ever contraction since the 1997 financial crisis.

Last week, South Korea's central bank raised its growth outlook of exports for this year to 7.1 percent from 5.3 percent. It maintained the economic growth outlook for the year at 3 percent but hinted it may revise up the figure depending on virus development. (Yonhap)