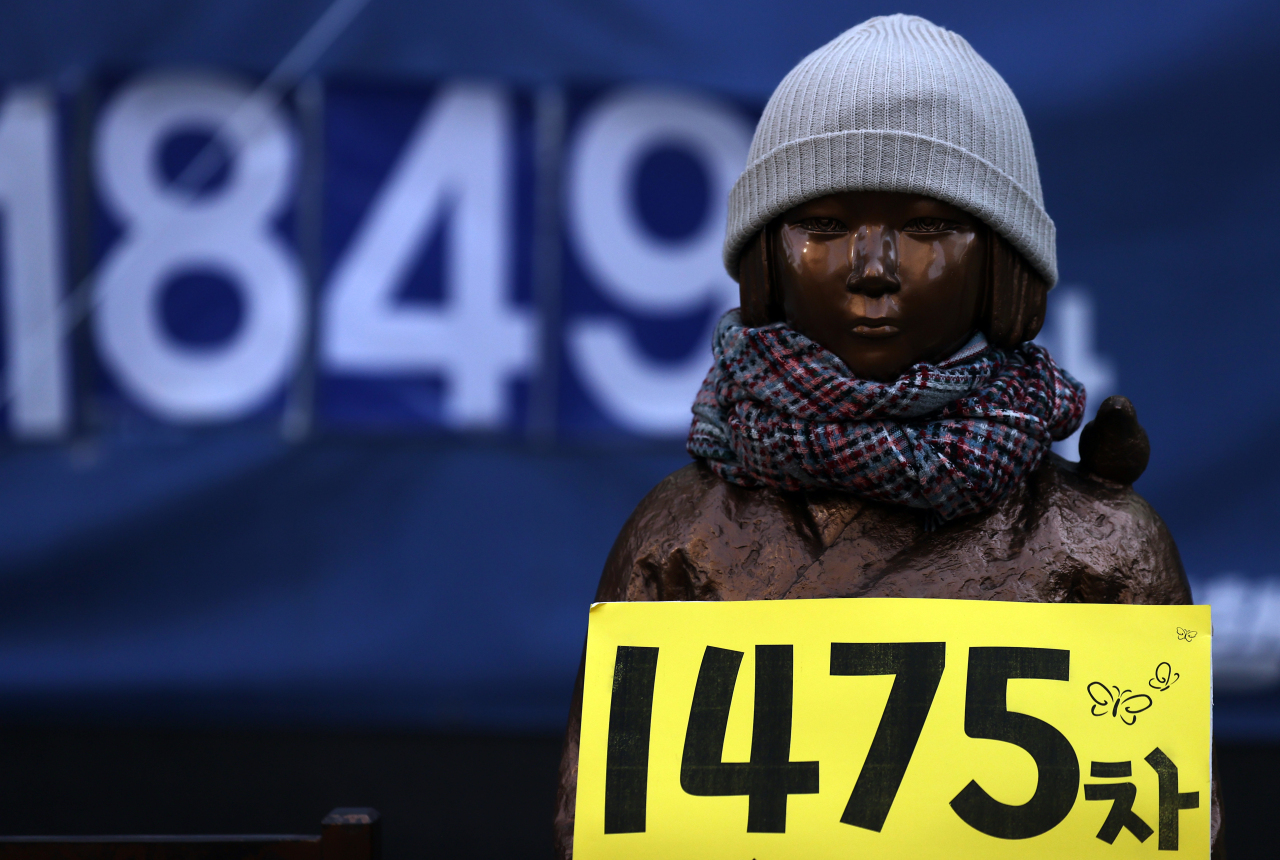 This photo, taken on Jan. 20, 2021, shows a statue symbolyzing victims of Japan`s wartime sexual slavery in front of the Japanese Embassy in Seoul. (Yonhap)
The “comfort women” issue has come to the fore again in the lingering feud between Seoul and Tokyo. The two neighbors were seen locking horns at the United Nations Human Rights Council last week; separately, a South Korean victim of Japanese military sexual slavery pleaded with Seoul and Tokyo to take the thorny issue to the International Court of Justice for a resolution.

Lee Yong-soo, one of the survivors, called for the matter to be settled in the UN’s highest court while the remaining victims are still alive.

“There’s not much time,” the 92-year-old said at a press conference last week. “I plead with the government to hold Japan accountable under international law. I hope the two countries can resolve the issue permanently in the international court and live in peace with each other.”

In January a Korean court ordered the Japanese government to pay damages to a group of Korean survivors for the mental distress and financial losses they suffered as a result of Japan’s wartime atrocities. Tokyo, however, dismissed the ruling -- as it had dismissed past lawsuits against the country over wartime crimes -- and accused Seoul of violating its sovereign immunity, a principle of international law that prevents one country from being sued by another without its consent.

Lee’s plea for the case to be heard in The Hague appears to be a last-ditch effort to put an end to the decadeslong conflict, as it has become clear that the issue cannot be resolved through diplomatic talks or domestic court proceedings.

Japan has shown some interest in putting its wartime dispute with Seoul on the table at the world court, as it believes the international court would side with Tokyo and accept its “sovereign immunity” claim, pointing to a 2012 case between Germany and Italy.

The world court in 2012 rejected an Italian Supreme Court ruling that Germany must compensate Italians who were forced into labor during World War II, saying the ruling violated Germany’s national sovereignty.

But taking the case to the world court would require consent from both Seoul and Tokyo. Experts say it is unlikely that Seoul would pursue an international tribunal at this time, considering the “low-key” approach it has taken on historical issues in a bid to mend ties with Tokyo.

“In order for the ICJ trial to take place, the two countries need to come to an agreement. But this looks less feasible at this time,” said Lee Won-deok, an expert on Japan at Seoul’s Kookmin University. “The South Korean government has been focusing on improving relations with Japan and it would try to avoid creating another source of contention. Japan would also prefer not to publicize the comfort women issue on the international stage.”

Reflecting Seoul’s dilemma, Korea’s Foreign Ministry said it would  “carefully” review whether to take the issue to the international court, and would listen to the opinions of more victims.

Even if both Seoul and Tokyo were to proceed with an international court case, it would be difficult for the two sides to agree on what the court should judge, the professor said.

“Korea will want to stress the issue as a matter of wartime sexual violence and victims’ human rights perspective, while Japan will assert the primacy of sovereign immunity and underline all wartime compensation issues were settled through the past bilateral accords,” he said.

Japan maintains a firm stance that all claims related to its 1910-45 colonial rule of Korea were settled under a 1965 pact that normalized bilateral relations between the two countries. It also asserts that the 2015 agreement on the sex slavery issue resolved the matter “finally and irreversibly.”

Others suggest that taking the sex slavery issue to the international court could put pressure on Seoul to settle other outstanding issues there as well -- such as the use of forced labor in Japan’s factories during World War II, or which country rightfully owns Dokdo, a pair of rocky islets in the body of water between the two countries. Japan has sought to take these two cases to the world court, but Seoul has rejected those requests.

Those who favor a world court case are aware that an international tribunal might well side with Tokyo and accept its “sovereignty immunity” argument. But, they say, it could help publicize the issue and gain the international court’s recognition that the military brothel system was a war crime that violated international law.

“The motives of the comfort women are not financial reparations from the Japanese government, but an apology and acknowledgment of responsibility over the past, and to provide (correct) history education,” said Shin Hee-seok, an international law expert at Yonsei University, who is helping the victims bring the case to the world court, adding that such goals are hard to attain through the domestic legal process.

“No matter what kind of ruling the ICJ decides, it will have to judge whether the comfort women system was in violation of international law, and the testimonies of the victims would remain on the record,” he said. That in itself would be meaningful for the survivors, he added.