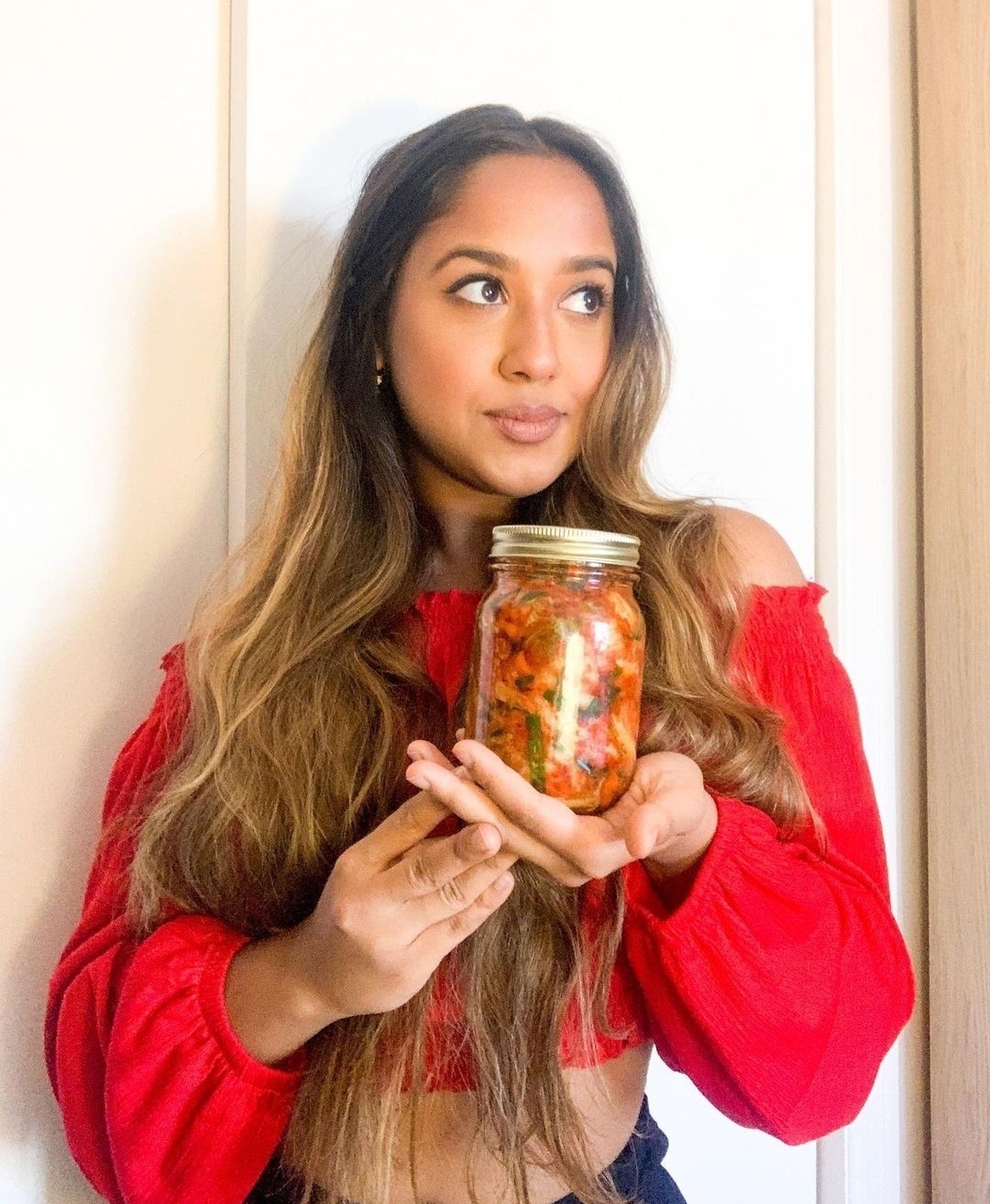 Priti Majumdar, who is Bengali and Canadian, poses while holding a jar of kimchi she made at home. (Priti Majumdar’s Instagram)
How to make kimchi: First, soak vegetables -- usually cabbage -- in a salty brine. Then make a spicy paste with different ingredients such as chili powder, garlic, ginger, sugar, and fish sauce. Finally, rinse, drain the cabbage and add the spicy paste.

Making kimchi at home is, for the most part, a laborious process, but that hasn’t stopped more and more foreigners from making their own jars of the spicy fermented cabbage dish at home rather than buying them at supermarkets.

Many of them got started purely out of curiosity and kimchi soon became a regular side dish for them.

Priti Majumdar, who is both Bengali and Canadian, found out about kimchi through Korean YouTube videos.

“It looked like the perfect side dish and pretty easy and cost-friendly,” Majumdar, who is vegan, said. “And, it’s always cool to say that I can make kimchi.”

At first, it seemed a little time-consuming for her to go through the whole process.

”But now I’ve gotten the hang of it, “ Majumdar said. She added that she has now made kimchi more than five times.

Others are fascinated by the unique taste.

Lindsay Williams from the UK said she enjoyed kimchi when she visited South Korea in August and September 2019 and decided to make it at home.

“Can’t remember where (I got the recipe from) but I found it online and gave it a go,” Williams said. “It worked so well and now we normally have a jar of fresh kimchi on the go at all times!”

Williams said her husband took it to the next level and tried making kimchi with Brussels sprouts, instead of cabbage, for Christmas last year and he loved it.

“(We eat) kimchi on the side of most meals now, to be honest, “she said, adding that she also tried making kimchi fried rice with her homemade kimchi.

Sara Rousalova from the Czech Republic, who is currently a student at Yonsei University’s Underwood International College, said she enjoyed her first kimchi experience so much it led her to making her own.

“Now, living in Korea, I became used to eating kimchi a lot. But it is difficult to find vegan kimchi so I prefer to make it (at) home whenever I have time.”

She added that her favorite way of eating kimchi is to pair it with steamed tofu. 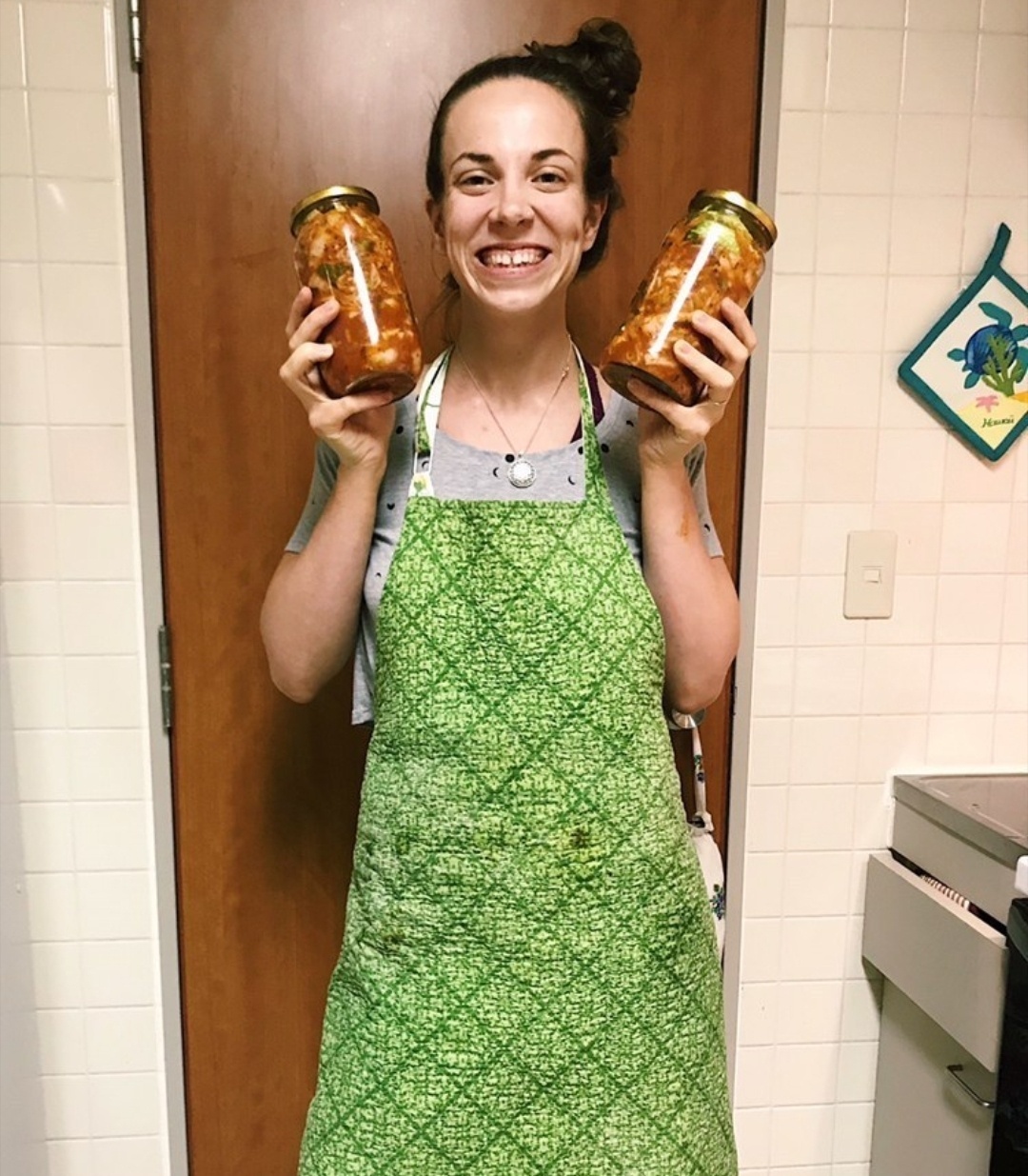 Jennifer Corpus, an American, holds jars of homemade kimchi (Jennifer Corpus)
Asbjorn Frank, head chef of the restaurant Daily in Copenhagen, Denmark, made kimchi at home using his own recipe and posted a photo of it on his Instagram account.

On the Feb. 15 post, he wrote that the tradition of eating kimchi can be traced back to the records in “Samguk Yusa,” a collection of legends and folktales mainly from Korea’s Three Kingdoms, written in 1145.

Although making kimchi was quite time-consuming, Frank said he is willing to go through the process again.

“I love the umami taste in kimchi and that it can be used for almost anything,” Frank told The Korea Herald.

Jennifer Corpus from the US, who posts about sustainable living on her blog, makes kimchi for a different reason.

“I’m always looking for ways to reduce our waste, and we eat a lot of kimchi so I wanted to try making it,” Corpus said. “I used to make sauerkraut with my parents growing up, so I’m a little familiar with fermenting cabbage.”

When she first tried it at home, she mainly referenced New York Times’ cooking writer Eric Kim’s blog post titled, “The Best Way to Make Kimchi, According to My Korean Mom” on the website Food52. “Now that I’ve made it a few times, I use a combination of different recipes to get the result we like best!” Corpus said.

She explained that it took more work than she expected, but she makes it all in one go in a large batch, a process called kimjang, so that she does not have to do it so often.

When it comes to how she enjoys her kimchi, Corpus, who currently lives in Japan, also does it in a special way.

“We make kimchi nabe, a Japanese hotpot soup,“ she said. ”My personal favorite is eating it on avocado toast with a sunny-side up egg on top.”

To promote kimchi making and to mark the Lunar New Year holiday earlier this month, the Korean government sent out kimchi-making kits to 18 embassies in Korea that agreed to accept them.

Einar Hebogard Jensen, ambassador of Denmark to Korea, on Feb. 4 posted a short video of him making kimchi on the embassy’s official Instagram account. 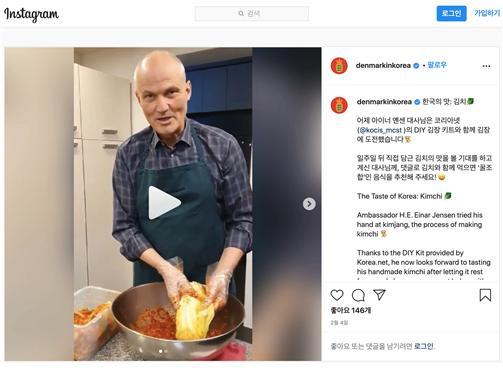 Einar Hebogard Jensen, ambassador of Denmark to Korea, makes kimchi in a video posted on Instagram. (KOCIS)
“I have the cabbage here and I have the paste, and I am adding the paste to its leaves and it is supposed to be a very strong taste. I have to be careful not to get it in my eye,” Jensen said in the video. “It looks great and I am looking forward to tasting it.”

The do-it-yourself kit was provided by the Ministry of Culture, Sports and Tourism and Korean Culture and Information Service.

The Embassy of Belgium in Seoul also posted photos of its staff making kimchi on social media, saying, “It was a great way to have a small team building and let our newest staff members discover the tradition of Korean kimchi making.”