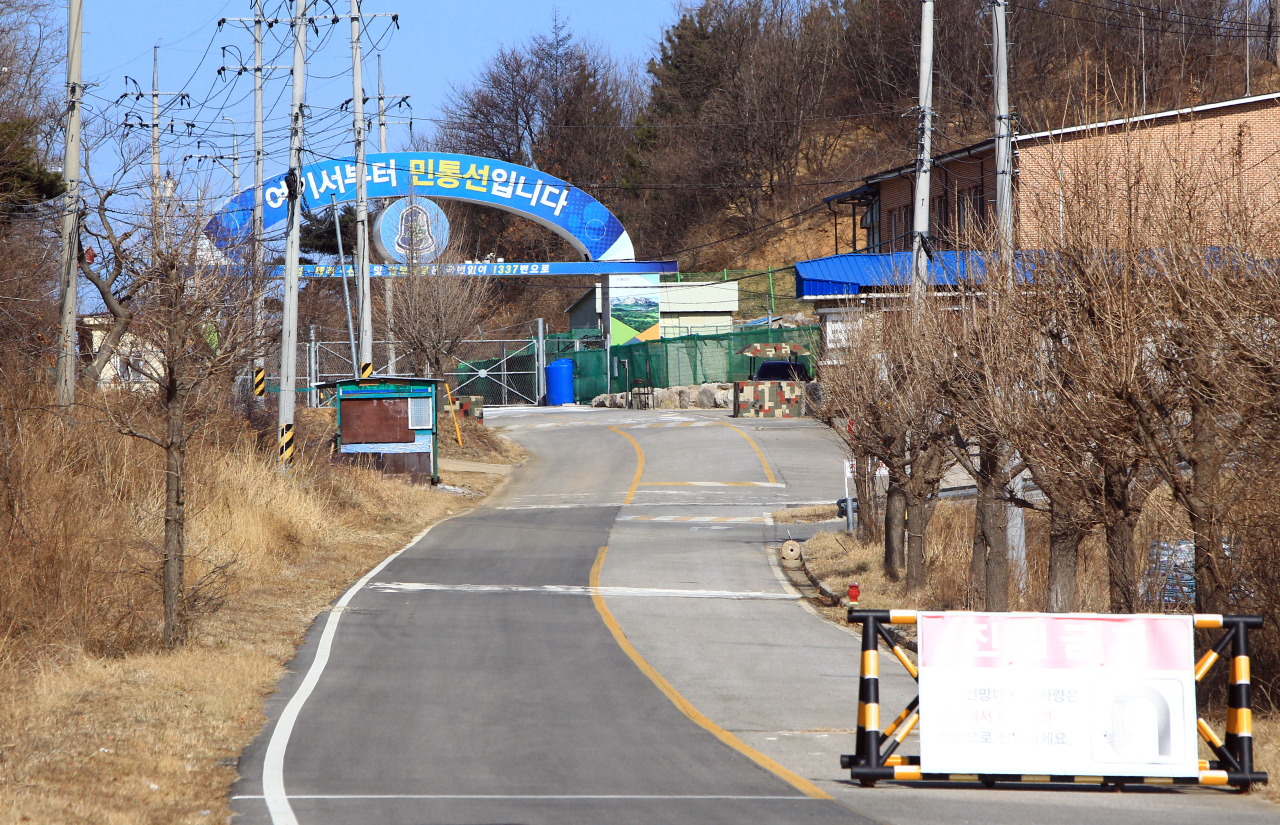 The no civilian zone, which lies south of the Demilitarized Zone separating South and North Korea, is seen shutdown to outside visitors after a North Korean man is taken into custody near the area, Feb. 16, 2021. (Yonhap)
It took South Korea’s military at least three hours to detect a border breach by a North Korean defector who swam across the eastern maritime border on Feb. 16, in what appeared to be an indisputable lapse in border security.

South Korea’s Joint Chiefs of Staff said Tuesday that the military surveillance system picked up the man the moment he set foot on South Korean soil at 1:05 a.m. that day, but it learned about the event at 4:16 a.m. Commanders were notified much later.

The defector swam here in diving gear and cut through a drainpipe beneath barbed wire fencing along eastern frontier beaches, all undetected. He was taken into custody later while walking along the road on the southern side of the Demilitarized Zone that separates the two Koreas.

The alarms went off when security cameras overlooking the beaches spotted him, but the soldier on duty was not made aware, according to the military, which reiterated its earlier finding that the defector swam at least six hours in a wetsuit with flippers.

Critics had raised suspicion that the defector, a civilian in his early 20s, could not have endured the cold water so long without advanced diving gear and military training.

“He was wearing a padded jacket inside and the water was flowing south that day,” the military said. He stayed afloat longer than he could have otherwise with the extra buoyancy from the jacket under his wetsuit, it explained. He was also a fisherman who knew his way around water, the military added.

The military admitted that it should have checked the drainpipe, which has structures inside to deter forced entry. The drainpipe was hard to locate and appeared to be loaded with land mines that had floated in from the North, the military said.

Still, the military is facing mounting criticism over repeated security lapses in the same region, where North Korean defectors have made a run for it three times since 2012 -- all initially going unnoticed.

The military vowed to beef up border security in November when it saw a second breach in the same region -- Goseong County, within the northernmost part of Gangwon Province. Then, a senior military officer admitted that the military was unable to carry out an inspection every time something suspicious occurred.

“We will find out who is responsible for the breach and hold them accountable,” the military said.