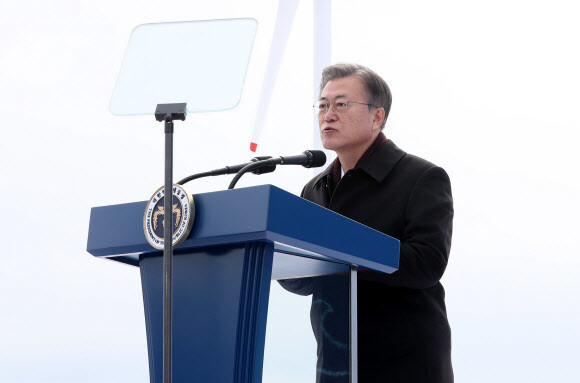 The recent Texas ice storm, which froze wind turbines and caused massive blackouts, sparked a heated debate on the efficacy of wind power in the United States -- a debate that has spilled over to South Korea as it plans to build the biggest wind farm in the world.

According to the Electric Reliability Council of Texas, when electricity demand peaked at more than 69 gigawatts during the storm, the state lost 16 gigawatts from renewable energy sources, mostly wind; and 30 gigawatts from thermal sources, which include gas, coal and nuclear energy.

While politicians on the left and right are butting heads over whether wind power was the main culprit in the blackout, the case has prompted heated debate on the efficacy of wind power -- especially during natural disasters.

Korea, too, may find itself facing the same dilemma down the road.

The Environment Ministry on Monday put together an exclusive task force that will carry out an environmental assessment before expanding the country’s wind power generation capacities.

The action was a follow-up to President Moon Jae-in’s vow on Feb. 5 to inject 48.5 trillion won ($43.5 billion) into a project to build the world’s biggest wind farm in the waters off Sinan County, South Jeolla Province, near Mokpo, by 2030.

The 8.2-gigawatt wind farm, once completed, will be more than seven times bigger than England’s 1.12-gigawatt Hornsea wind farm, the world’s biggest offshore wind farm as of last year.

The catch is that the site of Korea’s planned wind farm stands in the typical path of the typhoons that hit the western and southern parts of the country every summer.

Last year Typhoon Bavi tore through the resort island of Jeju and other areas in the southern part of the country, attaining wind speeds of 43 meters per second. When the typhoon reached the waters near Mokpo, it was moving north at 30 kilometers per hour.

“When Bavi hit Jeju last year, all 41 of the wind turbines in operation had to be shut down either automatically or manually. To protect the turbines, when the wind speed reaches between 20 and 25 meters per second, they have to be shut down. Though none of them were damaged last year, when a stronger typhoon came in 2016, the blades of the wind turbines were actually bent and gnarled,” an official from Jeju Energy Corp. said.

The official added that shutdowns of wind turbines do not directly trigger blackouts. Based on weather forecasts, thermal power plants can make preparations in advance and compensate for shutdowns by ramping up electricity generation. But Jeju suffered extensive blackouts in 2016 as the powerful typhoon damaged transmission towers, disconnecting thermal plants from power grids.

Experts, however, waved away concerns about blackouts, saying that even if a typhoon were to take down the 8.2-gigawatt wind farm in Sinan, regionwide or nationwide blackouts would be unlikely.

“The blackout in Texas occurred because wind generates about 20 percent of the electricity there. The Sinan wind farm will only account for a small fraction of Korea’s electricity generation, so there’s no need to worry, for now,” said a government official from the wind power division of South Jeolla Province.

Once it is completed in 2030, the actual generation capacity of the 8.2-gigawatt Sinan wind farm will be about 1.9 gigawatts, considering that the average operation rate of offshore wind farms is about 24 percent, according to Kang Seung-jin, a professor at Korea Polytechnic University’s energy graduate school.

Simply put, 1.9 gigawatts of the Sinan wind farm will account for only 1.5 percent of the nation’s actual generation capacity of 122.4 gigawatts in 2030, according to the government’s official energy blueprint for the years 2020-2034.

“Even if a typhoon takes out the 1.5 percent, Korea will have a backup generation capacity of 22 percent (in 2029-2034). Natural gas can always provide backup for the Sinan wind farm if it fails,” said a senior researcher from the Korea Energy Economics Institute.

According to Kim, Korea’s average marine wind speed is 7 meters per second, but there is a significant gap between fast and slow wind speeds. Kim argues that this gap can trigger “power swings” and put the stability of the nation’s electricity supply at risk.

When wind blows at inconsistent speeds, the amount of electricity that wind farms generate oscillates, causing disturbances in voltages and currents. Last year, Jeju Island halted the operation of its wind farms on 70 occasions due to power swing issues.

Kim cited a case in Japan. After the 2011 nuclear meltdown in Fukushima, the Japanese government installed three huge wind turbines worth 60 billion yen ($56.8 million) combined to replace the failed nuclear power plant. Yet due to low profitability and constant mechanical problems, the Japanese government removed one turbine in June and plans to dismantle the other two starting in April.

“Wind turbines perform best when wind speed is consistent. However, the power swing issues can be solved by using advanced turbines developed in Denmark, Germany or Norway. Domestic wind turbines made by Doosan Heavy Industries & Construction, for example, have a significant technological gap with European ones and aren’t equipped to solve the power swing issues,” the KEEI official said.

“Korea can either wait for Doosan to catch up with global leaders or purchase foreign-made turbines at higher prices.”

“The government can’t force businesses to use Korean-made wind turbines or parts for the construction of the Sinan wind farm because such a policy would violate international rules set by the World Trade Organization.

However, when foreign players enter Korea, the government can implicitly pressure them to use domestic parts as an admission fee for doing business in Korea. Taiwan, for example, designated certain parts and pressured Orsted to use them when the Danish wind power company entered the Taiwanese market to develop offshore wind farms there,” said an official from the Korea Wind Energy Industry Association.