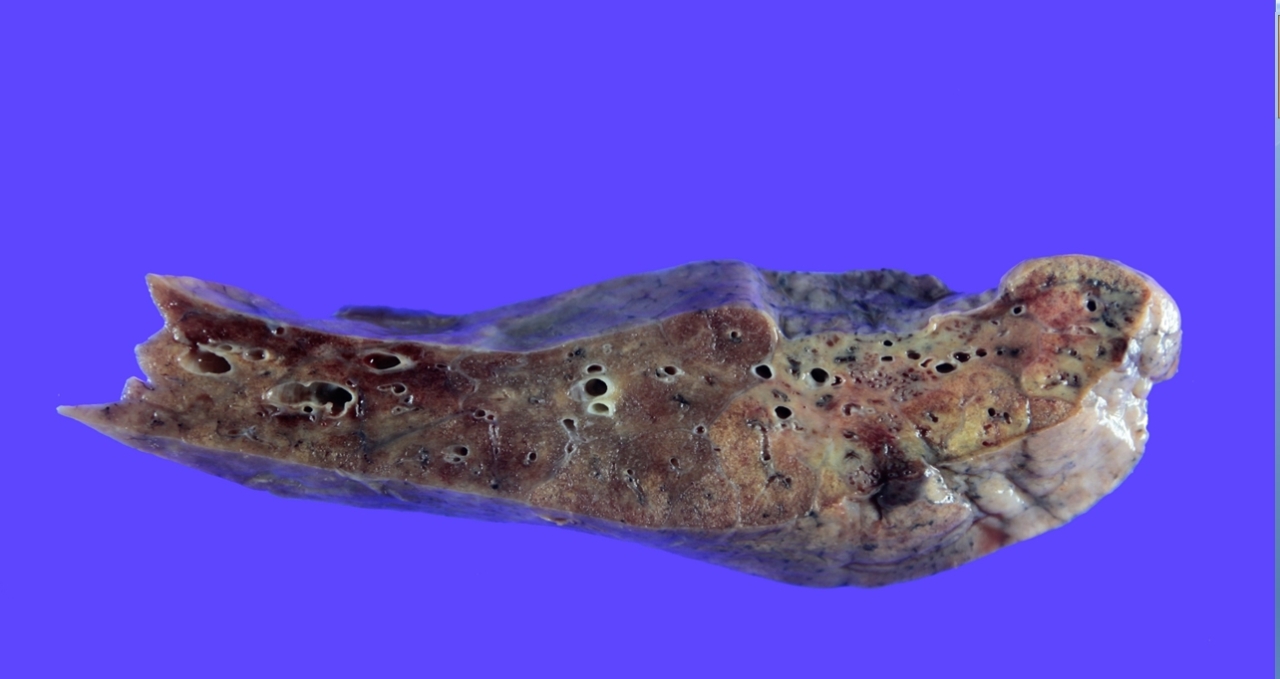 Photo shows the lung of a COVID-19 patient (courtesy of the Hallym University Sacred Heart Medical Center)
Almost a year into the pandemic, former COVID-19 patients are reporting symptoms that persist well beyond the course of their recovery -- a phenomenon also known as “long COVID.”

Korea Disease Control and Prevention Agency Deputy Director Kwon Jun-wook said over the weekend that pulmonary fibrosis, or lung scarring, had been observed in seven people within a group of 40 recovered COVID-19 patients. All of them were in their 40s or older.

“Decline in lung function, breathlessness, hair loss are among the symptoms affecting some patients long after getting a negative test result,” he said.

But it’s not just older people who can suffer long-term issues after COVID-19. In rare instances, even young people without serious health problems can experience long-lasting consequences, according to cardiologist Dr. Kim In-cheol.

The heart doctor at Daegu’s Keimyung University Hospital said in a phone interview that a 22-year-old patient who was diagnosed in February last year still has not fully recovered from her heart injury after a bout of COVID-19.

“Her ejection fraction -- a measurement of how much blood the heart pumps out each time it contracts -- is 30 percent. The healthy range for people her age is typically between 60 and 70 percent,” he said. She has also developed an erratic heartbeat.

The patient, who was previously healthy, initially had a mild case but soon had to be taken to the intensive care unit for breathing difficulties, he said. At the time she was diagnosed as having COVID-19-related myocarditis, or inflammation of the heart muscle.

Her heart condition has become chronic, and although she is able to resume her day-to-day activities, she has to get checked regularly for possible complications, he said.

“It is now well known that older people fare worse against COVID-19. But young, healthy people have reasons to not necessarily fear, but to exercise caution and prudence against the new disease,” he said.

“Young people, albeit rarely, can have an immune over-response to the viral infection that can lead to more serious outcomes.”

Park Hyun, another COVID-19 survivor, says he is still suffering from lingering health issues nearly a year on. He was officially deemed recovered in early March last year.

In an email exchange with The Korea Herald, he said he was so short of breath that he was unable to speak for long periods, limiting conversations even with his family.

“I had to take a leave of absence until I can regain my health,” said Park, who is a mechanical engineering professor at Pusan National University.

He has been publishing a log of his recovery regularly on his Facebook page, detailing body aches, chest pain, fatigue and sleeping difficulties as recurring symptoms.

Park, who was 47 when he contracted COVID-19, at first had mild symptoms such as a dry cough and itchy throat. But his condition quickly deteriorated. Within about three days after the first symptoms appeared, he was struggling to breathe.

“It’s been about a year, but I don’t think the government is following up on all the ‘recovered’ patients who are still in bad health. The hardest part is having to figure everything out on my own. There is no instruction or information from the officials about what I -- along with numerous others -- am going through,” he said.

He sought help from different hospitals, but there was no diagnosis or prescription for what he had. None of the medical bills are being covered by the state health insurance, either.

“I think there should be more comprehensive follow-up examinations on people who have had COVID-19,” he said.

Infectious disease expert Dr. Kim Woo-joo of Korea University Hospital in Guro, southern Seoul, said COVID-19 was a multisystem disease, and that it can have a wide spectrum of manifestations outside the respiratory system.

“The coronavirus invades human cells through the ACE2 receptors, which can be found in the vascular endothelial cells that line the circulatory system,” he said.

As for the long-haulers, Korea needs a better system of monitoring and caring for patients post-discharge, he said.

“As of now, they have nowhere to go. After the pandemic, we may be facing another public health crisis with the long-haulers,” he said.

Asked to comment on the long-term effects of COVID-19, Dr. Kim Yeon-jae of the National Medical Center said, “So far COVID-19 does not seem to deviate from the typical course of a viral infection.”

The head of the NMC’s committee for emerging infectious diseases, Dr. Oh Myoung-don, said the committee had no plans for an announcement or press briefing on these long-haul patients in response to The Korea Herald’s inquiry.