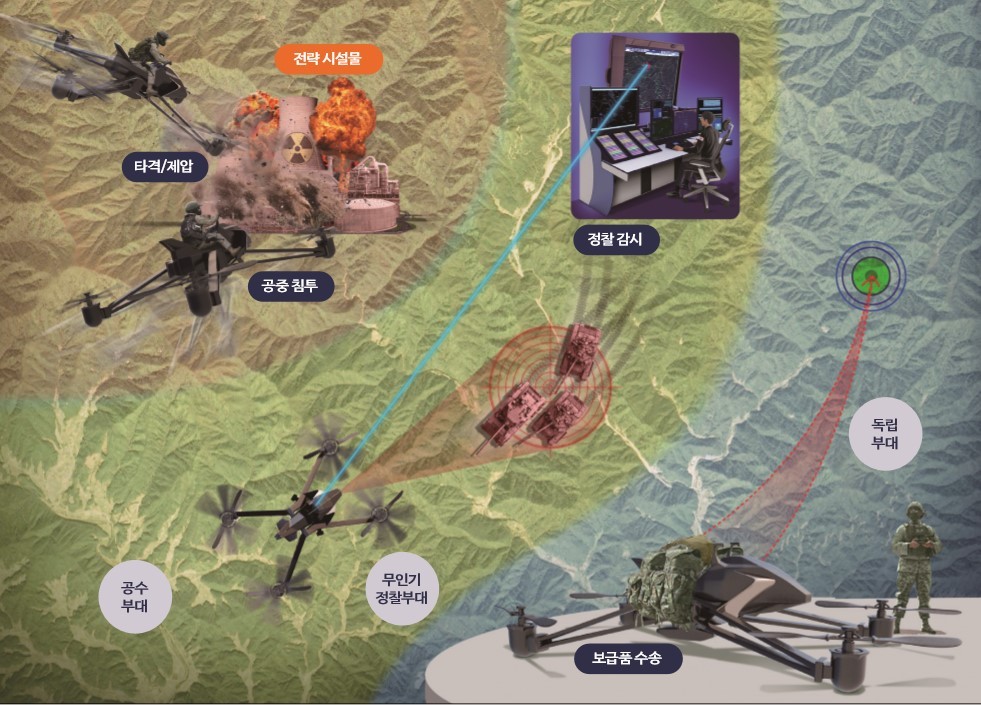 In a collaboration with the Defense Acquisition Program Administration, the ADD unveiled the Novel Weapon Systems Yearbook in booklet form for free on its website Wednesday.

Introduced in the booklet, the state-of-the-art weapons systems cover a wide range of technologies in line with the Fourth Industrial Revolution, including AI, synthetic biology, hypersonic speed and unmanned self-control.

One of them aims to reduce the size of the nuclear reactor and power system, which is already mounted on existing nuclear-powered submarines, the booklet says, so that it can power a long-term, multipurpose unmanned submarine.

With the capacity to dive up to 1,000 meters below the surface and move up to 60 kilometers per hour, the unmanned submarine would be equipped with a stealth system to carry out various missions, such as surveillance.

The booklet also proposes the idea of developing a multipurpose hoverbike, a flying bike that can be used in operations where access is limited on the ground or missions that require high speed carriers to help relatively slow weapons such as tanks or armored cars.

Dubbed autonomous cluster weapons system, the concept of planning and executing missions with human pilots sending out orders and AI pilots handling technical flights show how battles in the future might look, the yearbook says.

Besides the unmanned submarine, hoverbike and AI pilot, there are 18 more new weapons systems in the yearbook, including a portable explosives detector that can suck in mines without making direct contact and four-legged walking robot for reconnaissance missions.

“The publication of the Novel Weapon Systems Yearbook will provide a way to promote the future national defense technology development project and present guidance for establishing state-of-the-art weapons systems,” said Nam Se-gyu, president of the ADD.