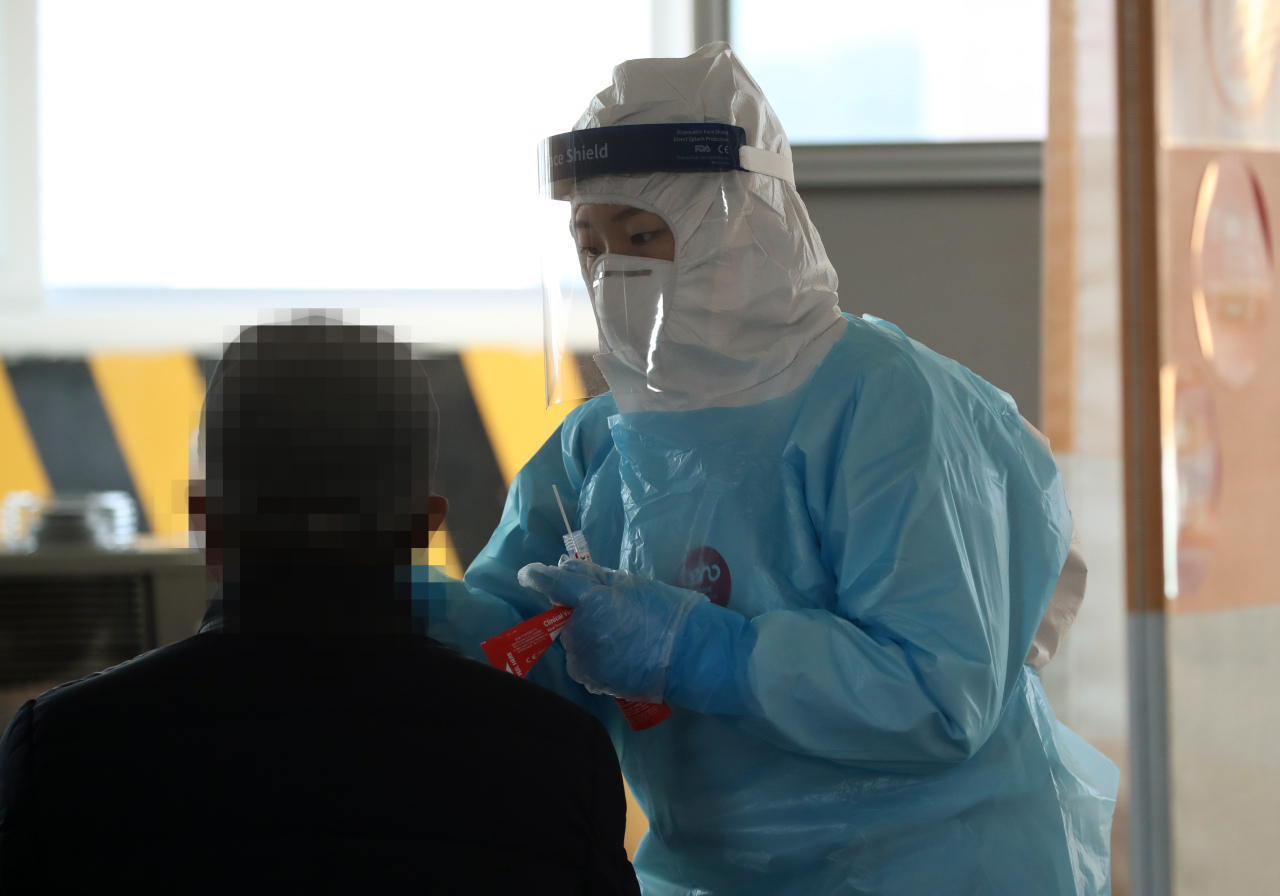 This photo taken on Wednesday, shows a health worker clad in protective suit collecting a sample from a citizen at a makeshift virus testing clinic in the southwestern city of Gwangju. (Yonhap)
South Korea's daily new coronavirus cases stayed in 400s for the second consecutive day Thursday as health authorities try to further slow down infections with an enhanced social distancing scheme.

The country added 401 more COVID-19 cases, including 380 domestic infections, raising the total caseload to 73,918, according to the Korea Disease Control and Prevention Agency (KDCA).

Thursday's figure was slightly down from 404 cases reported the previous day.

The third wave of COVID-19 here reached its peak on Dec. 25, with the daily tally reaching 1,240, but has been showing signs of a slowdown since.

Although new infections appear to be slowing down, health authorities have urged people to keep their guards up against a possible uptick.

The country extended its tougher social distancing measures for two more weeks until Jan. 31, while easing some restrictions on cafes, gyms and other indoor facilities that have suffered revenue losses.

Under the new measures, the capital area is under Level 2.5, the second highest in a five-tier system, and the rest of the nation remains under Level 2.

The ban on private gatherings of five or more people, and the restriction on business operations after 9 p.m., has also been extended. But indoor gyms, cram schools and karaoke establishments are allowed to reopen on the condition that they strictly adhere to antivirus measures.

Of the 380 locally transmitted cases announced early Thursday, Seoul accounted for 122 cases, and the surrounding Gyeonggi Province took up 133. Incheon, west of Seoul, had 22 new cases. The greater Seoul area accounts for around half of the nation's 51 million population.

A sauna in southern Seoul reported 17 additional patients, raising the total caseload to 18.

A church in Yongin, just south of the capital city, confirmed eight more cases, with the tally reaching 224.

From Cheonan, 92 kilometers south of Seoul, six cases were reported from a post office.

Over the past year, cluster infections accounted for 45 percent of the total COVID-19 cases reported here. Most of the infections were traced to religious facilities as well as nursing homes.

Over the past two weeks, around 23.4 percent of newly identified cases had unknown transmission routes.

There were 21 cases from overseas, raising the total number of imported cases to 6,031.

Of the newly confirmed imported cases, eight were from the United States.

The country added 16 fatalities, upping the virus death toll total to 1,316. The fatality rate was 1.78 percent.

The number of seriously or critically ill COVID-19 patients came to 317, down six from a day earlier.

The total number of people released from quarantine after making full recoveries was 60,846, up 666 from a day earlier, with 11,756 people being isolated for COVID-19 treatment, down 281 from a day ago. (Yonhap)