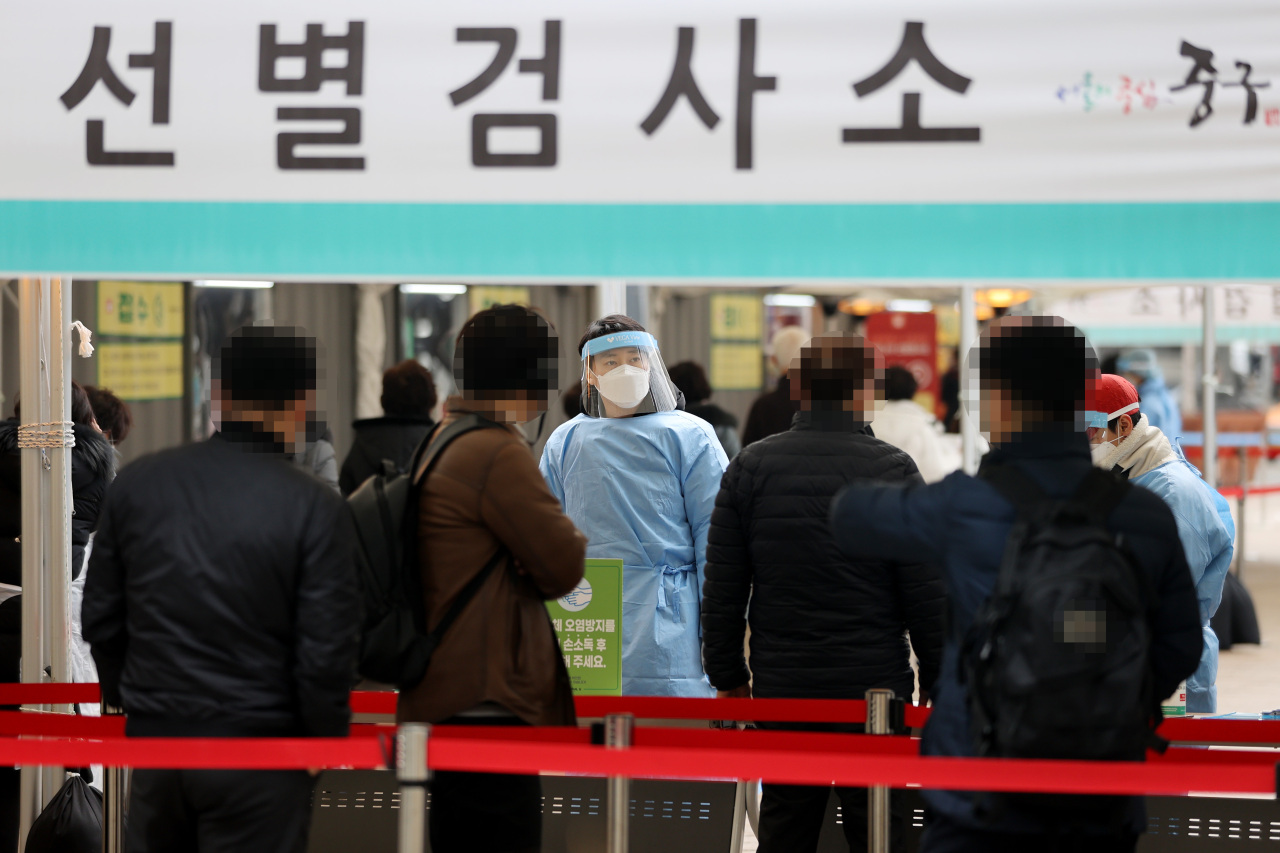 People are in line Friday to get COVID-19 checks at a temporary diagnostics center made near the Seoul City Hall. (Yonhap)
Authorities are in discussion to potentially adjust social distancing rules for next week, as the country looks to address demands from small merchants while controlling the ongoing third COVID-19 wave.

South Korea on Friday saw 513 new COVID-19 cases -- 484 locally transmitted and 29 from overseas -- raising the total number of cases recorded here to 71,241, according to the Korea Disease Control and Prevention Agency.

By Thursday’s end, Korea had also reported a total of 1,217 deaths from the coronavirus, up 22 from a day earlier. The number of COVID-19 patients in serious or critical condition reached 374, down from 380 people a day earlier.

The country conducted 84,390 tests throughout Thursday, down from 87,625 checks done a day earlier.

Friday’s tally extended hopes that Korea is well on track to control its virus situation and potentially adjust some social distancing rules in response to requests from small merchants enduring business difficulties.

The government is planning to announce new social distancing rules on Saturday after the current ones expire by the end of Sunday. It was speculated that the government will maintain its current rules for regions while extending the ban on private gatherings.

“We have entered a phase of decline after turning a corner,” Prime Minister Chung Sye-kyun said in a meeting Friday. “But we are still in an emergency situation when considering the fact that the country was reporting fewer than 100 cases per day before the third wave started.”

Until Sunday’s end, the government is imposing Level 2.5 social distancing rules in Seoul, Incheon and Gyeonggi Province and Level 2 rules for the rest of the country. An additional ban on private gatherings of five or more people is to expire on the same date.

Authorities are focused on controlling the virus wave before the country undergoes its second Lunar New Year holidays under the COVID-19 pandemic.

“There’s Lunar New Year holiday in February, and the vaccination program has to be prepared, too,” said KDCA Deputy Director Kwon Jun-wook in a press briefing Thursday.

“Some form of social distancing must be maintained. The ban on private gatherings of five people or more has been effective in reducing the number of new patients.”

It was reported that these general social distancing levels will be maintained for the capital region and the rest of the country, but exemptions are expected for a number of businesses that experienced operational limits from strengthened social distancing rules.

The government could allow dine-in services for cafes while allowing study centers to operate with eased restrictions. The 9 p.m. curfew could be adjusted to a later time of the day, some have speculated.

Some experts have suggested the government continue imposing the ban on private gatherings until the end of Lunar New Year holiday season, which spans from Feb. 11 to Feb. 14.