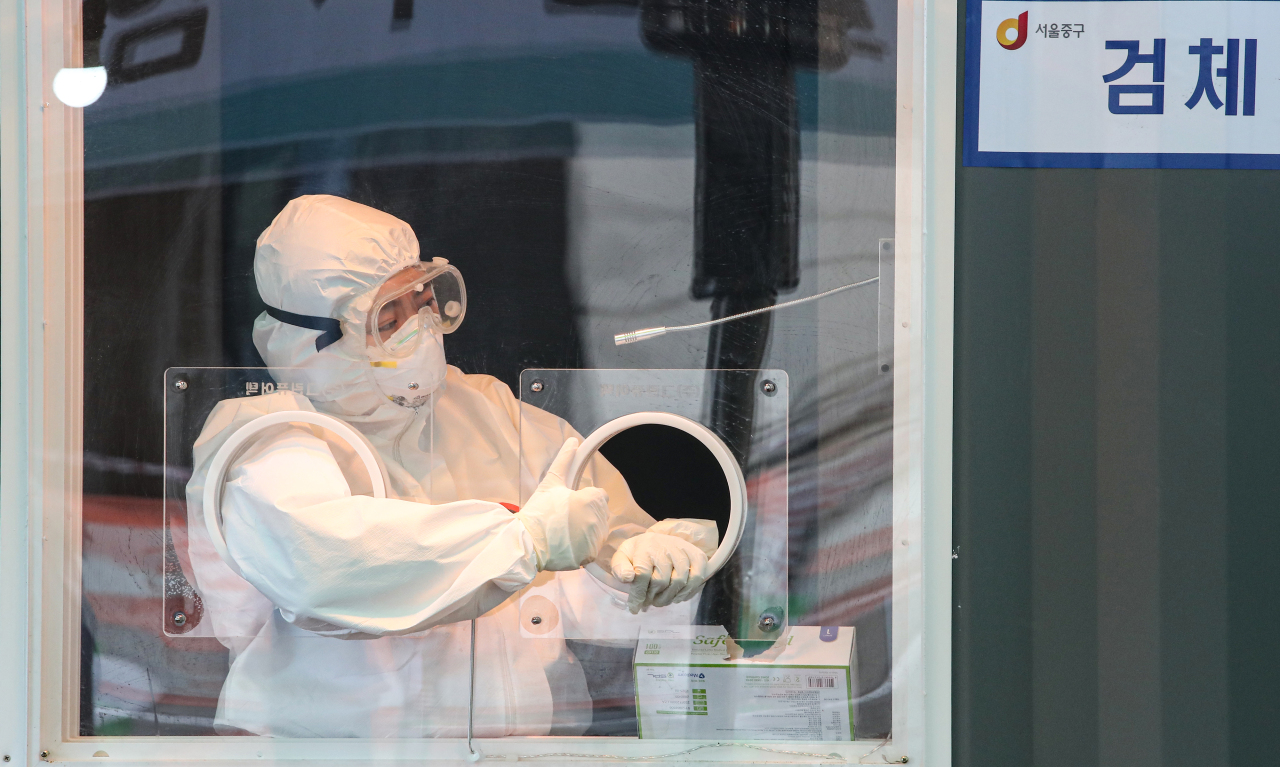 A medical worker waits for visitors to come for coronavirus tests at a makeshift clinic at the plaza in front of Seoul City Hall on Thursday. (Yonhap)
The number of new coronavirus cases in South Korea stayed in the 500s for the fourth consecutive day Friday, in a sign that the third wave of the pandemic has slowed down following a peak on the back of monthlong tougher virus curbs.

The country added 513 more COVID-19 cases, including 484 local infections, raising the total caseload to 71,241, according to the Korea Disease Control and Prevention Agency (KDCA).

The country's new virus cases reached a peak of 1,241 on Dec. 25, and daily figures had continued to breach the 1,000 threshold multiple times.

To cope with the soaring number of COVID-19 cases, health authorities have adopted the so-called Level 2.5 social distancing scheme, the second highest in the country's five-tier scheme, in the greater Seoul area since Dec. 8.

An average of 555 COVID-19 patients occurred over the past week, with an average of 523 local infections, the KDCA said. Level 2.5 is imposed when daily new cases continue to surpass 400-500 nationwide or the number of patients doubles from the previous day.

The relatively moderate Level 2 social distancing policy has also been implemented in other parts of the country.

The tightened measures will run through Sunday, and health authorities will decide on Saturday whether to maintain the current curbs or lower them.

The authorities will also announce special quarantine measures for the upcoming Lunar New Year's holiday, as millions of people are expected to travel across the country.

Health authorities are expected ease restrictions on the so-called high-risk facilities, including gyms, karaoke establishments and cram schools, amid concerns over the impact on business.

However, the authorities are expected to keep intact the current ban on gatherings of five or more people. The regulation was implemented in the greater Seoul area since Dec. 24 and other regions from Jan. 4.

Of the locally transmitted cases, the capital city of Seoul accounted for 122 cases, and the surrounding Gyeonggi Province took up 180. Incheon, west of Seoul, had 23 new cases. The greater Seoul area accounts for around half of the nation's 51 million population.

The number of daily new cases in Seoul was the lowest in 52 days, the city government said.

A total of 207 cases have been reported from a church in Yongin, 50 kilometers south of Seoul, up 30 from a day earlier, the authorities said.

A praying facility in Jinju added 12 more COVID-19 patients, bringing the total to 85, they said.

In addition, senior homes, hospitals and religious facilities across the nation have reported more cases.

Among the confirmed cases, 29 were imported from abroad, slightly up from 28 a day earlier.

The number of seriously or critically ill COVID-19 patients came to 374, down six from a day earlier.

The fatality rate came to 1.71 percent.

The total number of people released from quarantine after making full recoveries was up 764 from the previous day to reach 56,536. (Yonhap)