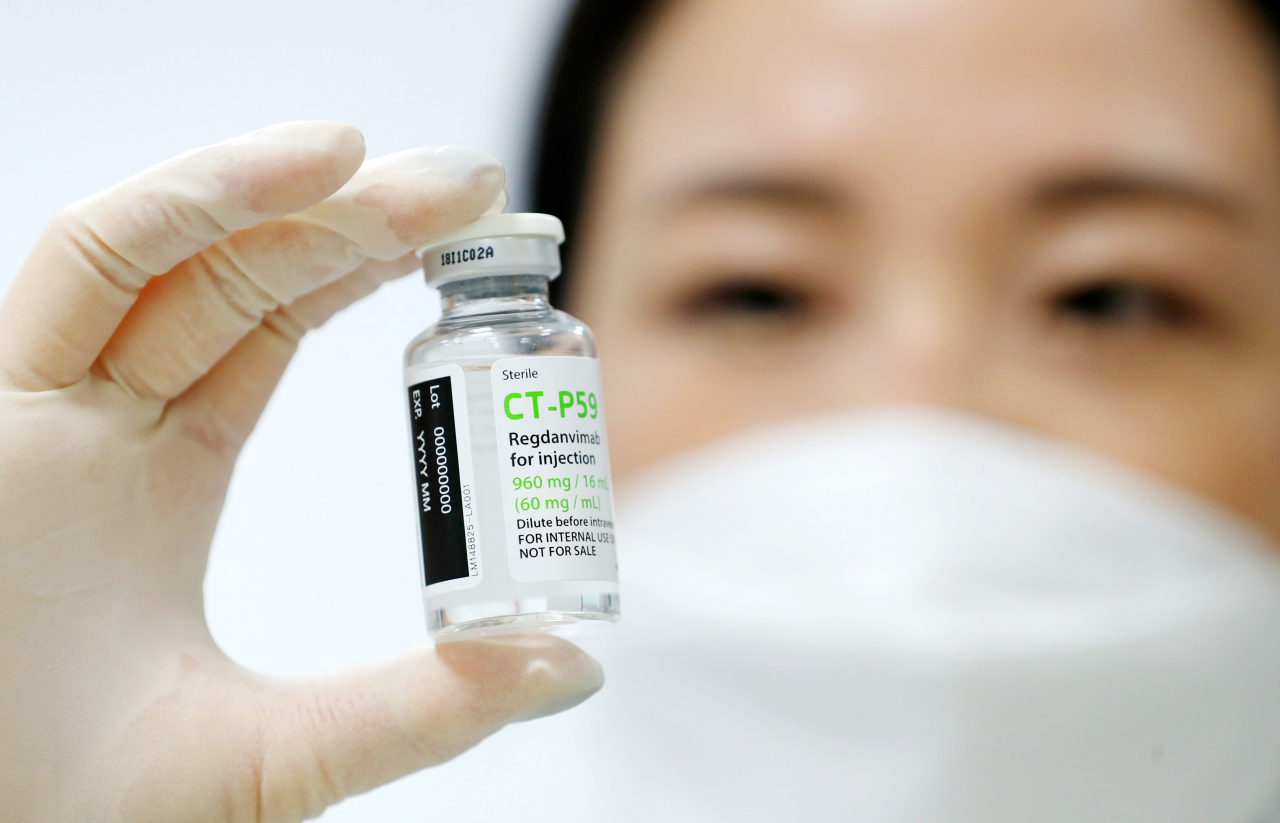 A day after Celltrion reported positive top-line data from its antibody drug regdanvimab, or CT-P59, another local drugmaker, Chong Kun Dang, presented promising results on Thursday from its own drug, nafamostat, from a clinical phase 2 trial.

Tested on over 100 people in Russia, 36 of them high-risk patients, nafamostat showed 61.1 percent clinical improvement, the company said. It shortened the recovery time from an average of 14 days to 10 days. Chong Kun Dang proposes that nafamostat could prevent the death of seriously ill patients.

The company will apply for permission to proceed to phase 3 trials and immediate emergency use approval within January. It will also try for overseas emergency use authorization, it said.

Slightly ahead of Chong Kun Dang, Celltrion’s antibody therapy is expected to be administered for the high-risk elderly cohort soon.

The Korea Disease Control and Prevention Agency on Thursday said it will allow the preliminary use of the drug even before the Drug Ministry finishes its review of it, as 35 medical institutes and 75 researchers have requested access to it for clinical testing purposes.

As Celltrion needs to further corroborate its data through a larger phase 3 clinical trial and prove regdanvimab can counter variant viruses from the UK and South Africa, the preliminary clinical use of the drug will expedite research, according to KDCA.

According to the company‘s announcement Wednesday, regdanvimab was able to prevent patients with mild to moderate cases from progressing to a more serious stage in 54 percent of the 327 participating test subjects. Among those tested, subjects over the age of 50 experienced a 68 percent clinical improvement rate.

The drug shortened the average recovery time by three days, from 8.8 days to 5.4 days. Those over 50 recovered as many as six days faster with regdanvimab than those not receiving the treatment, according to Celltrion.

As an antibody treatment, Celltrion’s regdanvimab is an initial countermeasure for mild to moderate symptoms before they worsen. The prerequisite for the drug’s efficacy is an early diagnosis of the infection.

While many were quick to express disappointment and skepticism at the mere 54 percent amelioration rate, others viewed the achievement as a significant step coming from a country that has joined the biologics research and development race comparatively late. Celltrion was founded in 2001.

Currently, around the globe only Eli Lilly and Regeneron have the US Food and Drug Administration’s emergency use approval for their antibody treatments.

Regeneron’s casirivimab, the drug given to US President Donald Trump in October when he was infected, received FDA emergency use authorization Nov. 21.

In Korea specifically, only Gilead Sciences’ antiviral therapy remdesivir has emergency use approval for COVID-19.

Celltrion applied for emergency use of regdanvimab in Korea on Dec. 29, and is now awaiting the results of a 40-day review.

The company is preparing for similar applications with the European Medicines Agency and the US FDA.

It will still need to present further findings from larger clinical phase 3 trials in order to gain ultimate approval and commercialize the drug.

GC Pharma is soon to apply for emergency use of its blood plasma-derived COVID-19 treatment GC5131A with the Korean authorities.

GC Pharma has completed a phase 2 clinical trial targeting 60 people and is currently analyzing the data. A company official told The Korea Herald that an application will materialize before March. Unlike Celltrion’s antibody treatment, which was initially designed for mild to moderate cases, GC Pharma is meant for serious cases.

Daewoong’s camostat treatment recently initiated a phase 3 clinical trial in combination with remdesivir, targeting 1,072 serious domestic patients with a December deadline. This was after the midterm report for a clinical phase 2a trial showed less-than-hoped-for effects from the standalone use of camostat for COVID-19.

Daewoong, however, expects to apply for emergency use authorization for camostat for mild and moderate cases in the foreseeable future. CEO Jeon Seng-ho of the company had projected camostat would enter the market as a treatment for mild cases of COVID-19 in January.

The KDCA reiterated Thursday that it has found hydroxychloroquine and Kaletra, or lopinavir, ineffective for COVID-19 treatment. The use of steroids such as dexamethasone aggravated the death rate when used on mild case patients who required no respirator. The aforementioned drugs are advised against use by medical professionals, the KDCA said.