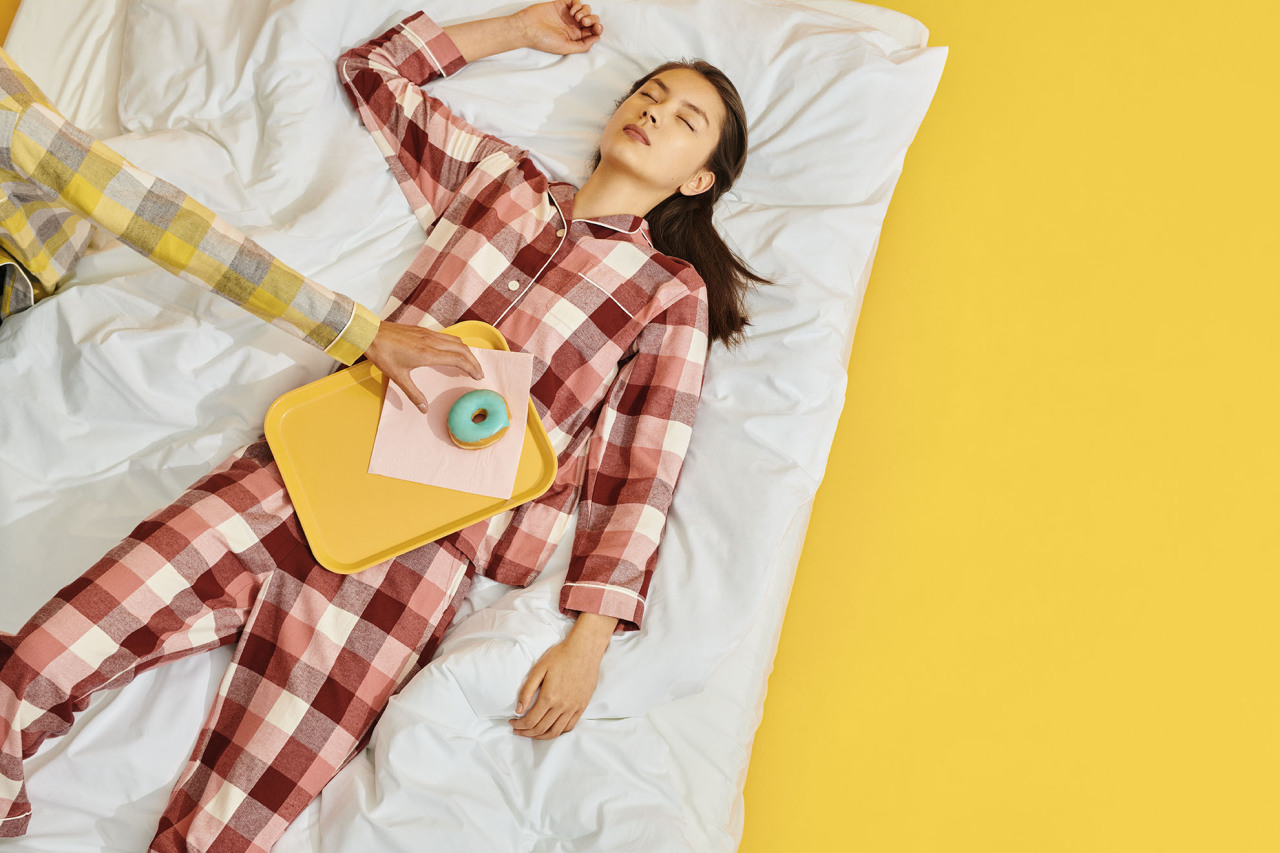 Lifestyle brand Jaju's flannel pajama set (Shinsegae International)
When the novel coronavirus made its appearance across the world earlier this year, optimistic market observers anticipated that “revenge spending” would eventually rebound to counter the damaging effect of the initial outbreak.

South Korea, which had successfully retained its domestic virus spread in the first half of the year, had hopes for a while of seeing its domestic market get back on track within the year.

But with a third wave of infections here and the stronger social distancing rules that have come with it, year-end consumption comes down to a single keyword -- home.

Abundant year-end parties have turned to family gatherings at home, eating out at restaurants has been replaced by home-cooked meals or easily accessible meal kits.

Practically confined to their residences, with limited visits -- both inbound and outbound -- people no longer shopped for year-end mood party wear, swimming suits for overseas holidays, or pricey overcoats. Most chose to buy lounge wear, pajamas, and casual clothing for indoor life, while a limited pool bent toward high-end fashion brands as a way of “revenge shopping” amid the pandemic stress.

Reflecting the increased interest in house parties, retailers are witnessing sales jump for items used for house parties, and seeing shifts in the year-end consumption patterns.

According to Emart, a hypermarket chain, wine accounted for 27.7 percent of alcohol sales, surpassing that of beer and soju during the period of Dec. 1-14.

Sales of wine usually move ahead of other liquors in December, but it is expected to be more popular than other times, a retail official explained.

Lotte Mart also said the COVID-19 pandemic has influenced the growth in sales of the dishes. According to the mart chain, its sales of tableware increased by 13 percent from March to November.

Following the rising trend, retailers are upping their special promotions and discounts to meet the demands.

Homeplus, another hypermarket chain, is running a two-week year-end promotion from Sunday to offer discounts on “home party items” such as Christmas decorations and cakes. It also introduced giant king crabs weighing around 2.8 kilograms and jumbo lobsters.

Emart24, a convenience store chain here, said it started running a discount promotion from Sunday on food and drinks for house parties. The retailer also said it was launching end-of-year limited edition dosiraks, consisting of meat and vegetables.

There are still concerns that the latest social distancing rule limiting private gatherings of five or more people may weaken the public sentiment for year-end gatherings at home.

The nationwide restriction came into effect from Wednesday in Metropolitan areas and from Thursday in the rest of the country.

“While retailers are rolling out various items and promotions targeting the year-end house party trend, there are concerns that the sales may not turn out as good as anticipated, with the weakened sentiment for gatherings over the new social distancing rule,” an official from the retail industry said.

While retailers have launched large meal kits and special items for year-end celebrations, the new restriction may lead people to turn to delivery food or items with smaller servings, as they plan for smaller gatherings or withdraw party plans, another official said.

Wine has enjoyed a surge in popularity as stricter social distancing rules led to a rise in home drinking. The trend coincides with the winter season, when wine sales traditionally jump while demand for beer tends to rise during the summer, an official of convenience store chain CU explained.

As gatherings of five or more people are banned in Seoul and surrounding areas until early next month, beer brands are focusing on home drinkers.

“With year-end parties canceled, we have released limited editions and home party packages for those who are drinking at home,” said one official at Oriental Brewery.

The fashion industry saw new trends emerge out of the pandemic including “one-mile wear,” a concept of Japanese origin, referring to comfort clothing that one would wear within a mile of home as people were told to work from home and avoid big gatherings.

Against this backdrop, lifestyle brand Jaju enjoyed a near 300 percent jump in pajama sales during the fourth quarter compared to earlier this year when the brand released the homewear.

“Pajamas, jogger pants and sweatshirts were a major hit this year, which you can wear at home and go somewhere near without looking too disheveled as the pandemic made it difficult to travel far,” a Shinsegae International official said.

Though much of the fashion industry suffered a setback this year, high-end brands enjoyed a surprise growth, including Thom Browne which experienced a year-on-year 30 percent growth between January and Dec. 20, according to the fashion unit of Samsung C&T Corporation said.

“Foreign brands such as Thom Browne, Maison-Kitsune and Ami all fared well this year. They are loved by millennial consumers and then there is ‘flex culture’ as well as revenge spending,” one official at Samsung C&T Corporation said.