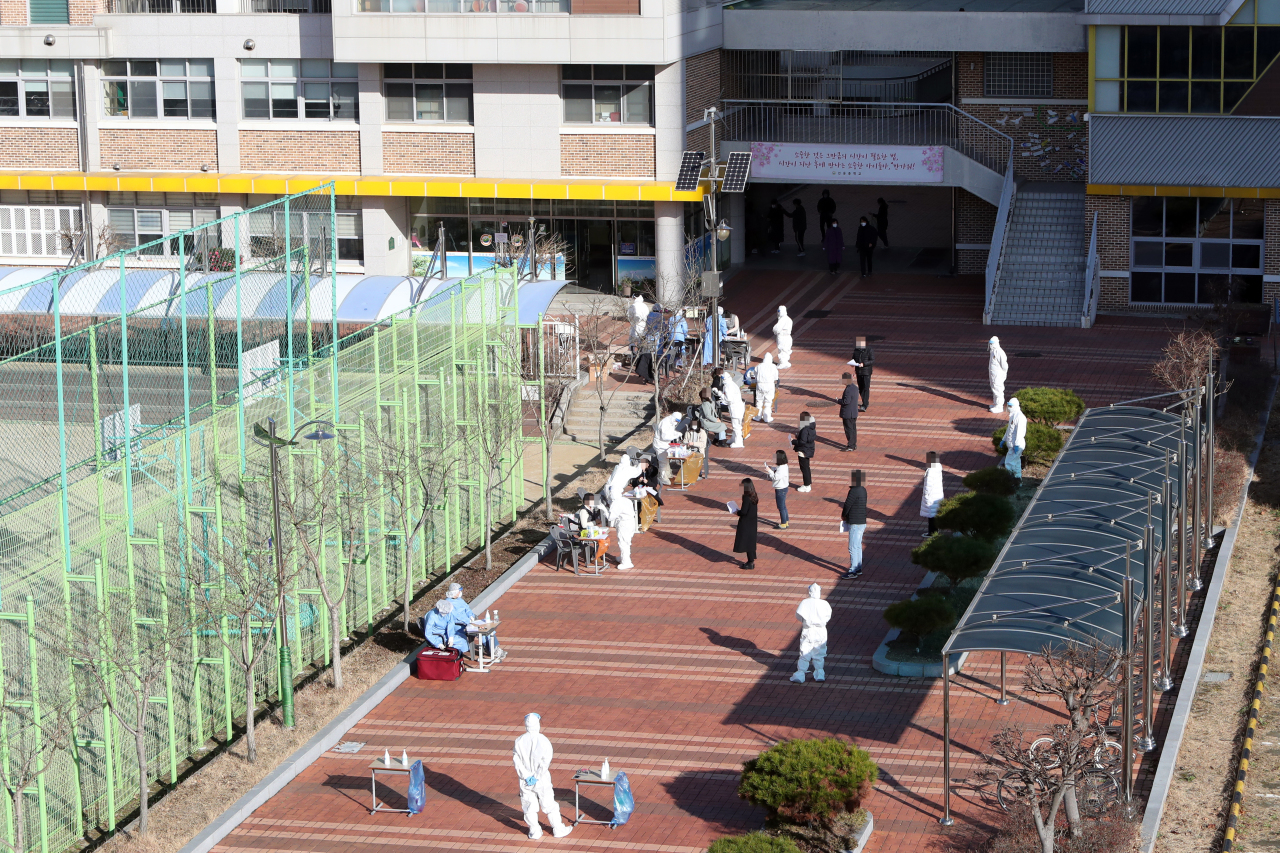 Medical workers conduct coronavirus tests on students and teachers at a middle school in the southwestern city of Gwangju on Tuesday, following the discovery that one of the school's students was infected with COVID-19. (Yonhap)
The daily number of new coronavirus cases in South Korea bounced back to over 500 again Wednesday, adding to concerns that the country faces a bigger wave of the pandemic in winter amid tougher social distancing measures.

The country added 511 more COVID-19 cases, including 493 local infections, raising the total caseload to 35,163, according to the Korea Disease Control and Prevention Agency (KDCA). It reported no additional coronavirus fatalities, bringing the total to 526.

The daily virus tally has appeared to be slowing over the past three days, staying in the 400 range after peaking at an eight-month high of 581 last Thursday, the KDCA said.

An average of 467 daily new cases were reported over the past week, it added.

Authorities said they will continue to vigorously monitor the current situation, stressing that social distancing measures will be quickly elevated if needed, amid worries over a possible surge in virus cases during winter.

The authorities also urged people to refrain from non-essential activities outside of their homes as hundreds of thousands of students are scheduled to sit for the annual state college entrance exam on Thursday.

They also warned that the country could report daily virus cases of between 700 and 1,000 in the next one or two weeks unless the current pace is curbed, as the country continues to report sporadic infection clusters of various sizes.

The greater Seoul area that includes the capital city, the surrounding Gyeonggi Province and the western port city of Incheon is under Level 2 social distancing measures in the five-tier system, but tighter restrictions have been applied to virus-prone facilities.

All other areas are under Level 1.5 distancing measures, up one notch, for two weeks.

Under the tougher distancing measures, the use of saunas and steam rooms in bathhouses is not allowed for one week in the greater Seoul area. Nine kinds of indoor exercises practiced in groups, including Zumba dancing, aerobics and kickboxing, are also banned

Hotels, party rooms and other guesthouses are also banned from hosting year-end or New Year's parties that are known to be prone to virus transmission.

By region, 192 new virus cases were reported in Seoul, 143 cases in Gyeonggi Province that surrounds the capital and 21 cases in Incheon, west of Seoul, accounting for more than 70 percent of the daily new locally transmitted cases. The greater Seoul area is home to around half of the nation's 51.6 million population.

A total of 137 new cases were reported outside of the greater Seoul area on Wednesday, exceeding the 100-mark for the past nine straight days.

A dance academy in western Seoul added four more cases, bringing the total to 219, according to the agency.

The number of seriously or critically ill COVID-19 patients came to 101 as of midnight, up from 97 a day earlier.

Amid concerns over a possible shortage of hospital beds for patients in critical condition, health authorities said they have added 30 such beds at the National Medical Center in Seoul.

The country added 18 imported cases, sharply down from 31 a day earlier, coming mainly from the United States and Asian countries, excluding China, the KDCA said.

The total number of people released from quarantine after making full recoveries stood at 28,065, up 180 from the previous day. (Yonhap)