[ The Korea Herald – Send E-mail ]
Despite pandemic, lights are on at Korea’s stages
Local performing arts scene continues run under strict social distancing rules inflicted by the Korean government
By Im Eun-byel
Published : Nov 19, 2020 - 16:42
Updated : Nov 19, 2020 - 16:42
In a year that has witnessed the COVID-19 pandemic disrupt lives and devastate economies around the world, Korea has sought innovations to meet the challenges posed by the COVID-19 pandemic.

The following is the first article of a four-part series on how Korea is creating a new normal during the pandemic, produced in partnership with The Korea Foundation -- Ed.

While the performing arts scene is one of many industries hit by the ongoing COVID-19 pandemic, in Korea, the stage lights are still on.

Performing arts figures and institutions are striving to ensure the show goes on -- with both online and offline efforts -- offering comfort to people struggling with the crisis and allowing actors, dancers, musicians and more to stay in work.

From classical music performances and internationally touring musicals to K-pop concerts, the challenge is to keep the arts going while preventing and controlling the deadly disease that has disrupted lives around the world. 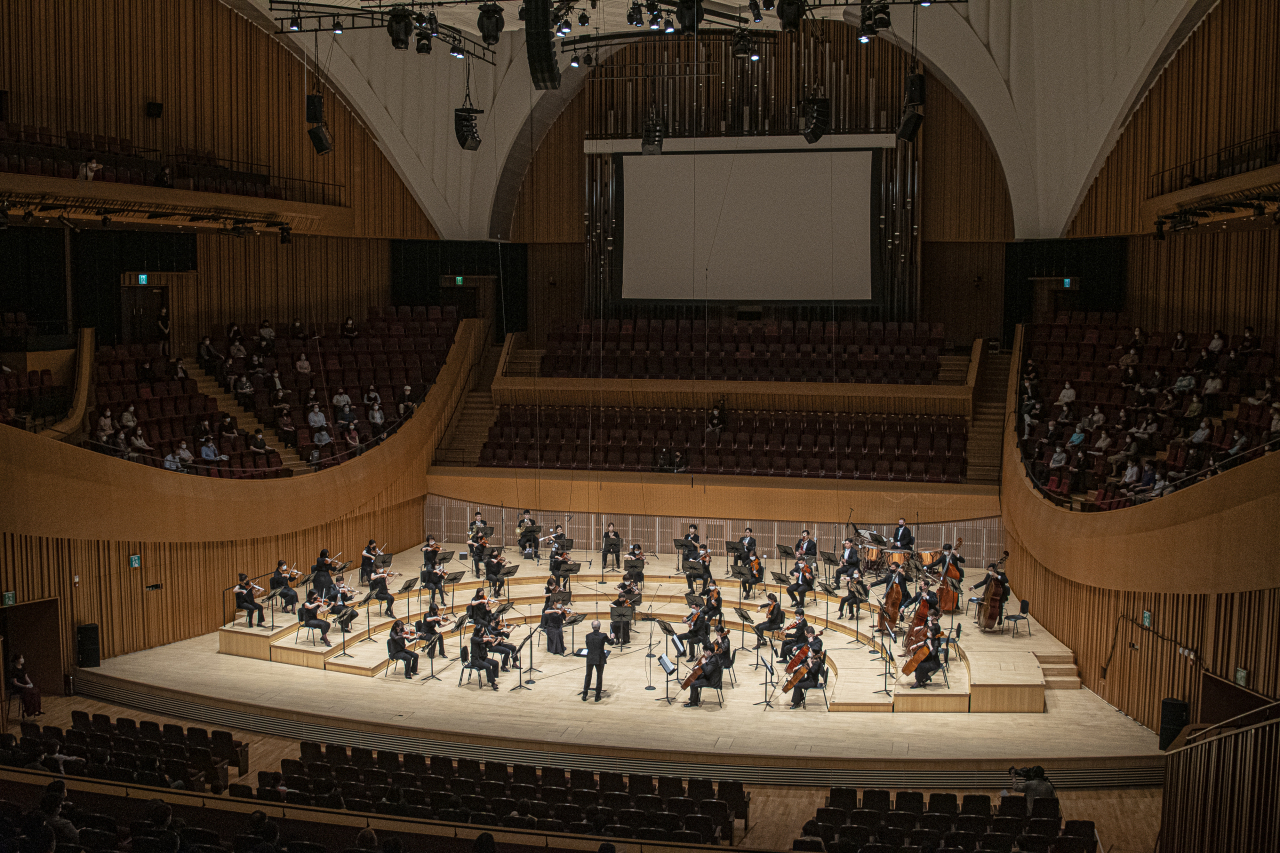 SPO performs in its “new normal” orchestra formation. (SPO)
The performing arts scene here took a major blow in February when the pandemic first hit. After few months, the industry mostly returned to normal -- or at least a “new normal.”

Performing arts venues implemented the “middle seat vacancy rule,” limiting the audience to capacity of 50 percent or less. Front seats were left vacant and choir seat sections were closed off to minimize points of contact between audiences and performers.

Entrances were controlled and audience members’ temperatures were taken. QR-code-based entry logs were introduced, allowing data on audiences to be collected for contact tracing.

“We are very grateful to the audiences. Everyone was keen on following the regulations. The audiences were simply amazing,” director Kim Se-young of the Universal Ballet Company said, referring to the troupe’s performance of full-act ballet “Onegin” in July.

The changes, however, were not limited to the audience.

This year, the Seoul Philharmonic Orchestra announced itself as a “new normal orchestra,” implementing a new social distancing rule onstage.

The new regulations mandate the conductor and musicians wear masks onstage, where possible. The orchestra members have to be seated 1-3 meters apart and transparent sneeze guards are placed in front of the wind instrument players who cannot wear masks. 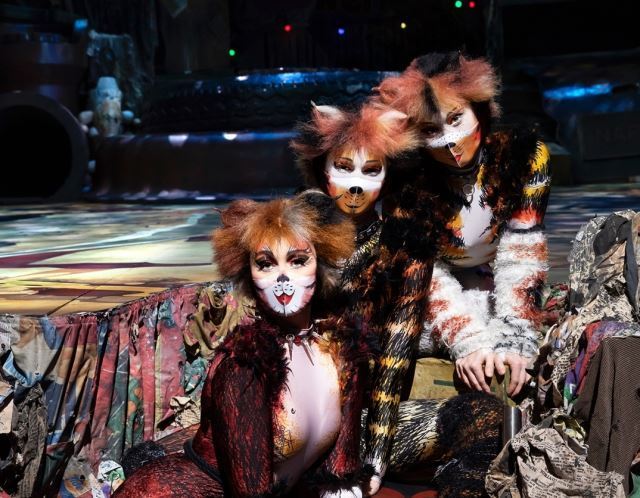 Three cast members of musical “Cats” wear masks with makeup on to match their characters’ appearance. (S&Co)
Korea is under the international spotlight this year as one of the very few countries around the world where musicals are still being staged.

While New York’s Broadway and London’s West End have been shut down, international tour productions traveled to Korea this year, citing Korea’s exceptional ability to control the COVID-19 pandemic.

The international production of the hit musical “The Phantom of the Opera” kicked off its Seoul run in March, shortly before most of the world was hit by the pandemic. Though the virus began to spread rapidly after the Seoul show began, the musical continued its run and even went on to Daegu after wrapping up its Seoul engagement.

“Sometimes, it is a little surreal to be here in Seoul with the company performing and knowing that we are on an almost different planet here,” Rainer Fried, associate director of the production, told The Korea Herald in an earlier interview. 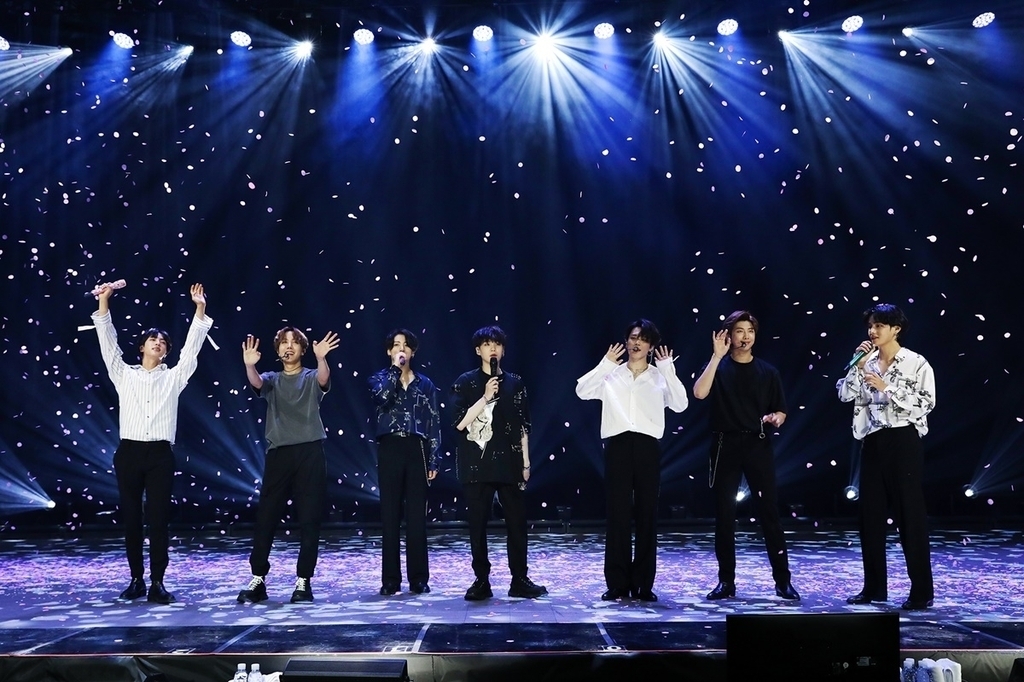 Entertainment juggernaut S.M. Entertainment’s “Beyond Live” concert series in April created a buzz around the world, with a concert featuring SuperM being viewed by more than 75,000 people across 109 countries. BTS’ online streaming concert, “Bang Bang Con: The Live” in June drew more than 756,000 paying viewers from 107 countries.

In September, the Culture Ministry announced that it would invest 29 billion won to build a studio for online concerts to support small- and mid-sized entertainment companies.

“Rather than pursuing direct profit from the online screenings, we are trying to gauge the possibility of a new market,” Kim Ji-won, vice president of EMK Musical Company said.

Based on the experience, EMK Musical Company’s affiliate, EMK Entertainment, will soon release web-only musical “Killer Party,” which takes the form of a series of short-form clips.

Other performances, including classical music recitals and operas, are following the trend, using the new “sponsorship feature” on Naver TV, a streaming platform operated by the local portal giant which allows users to ”donate“ to the shows.

As the greater Seoul area and Gwangju have been subject to stricter social distancing from Thursday due to the spike in the number of COVID-19 infections there, more performances are expected to connect with audiences at home via the internet.

Though the revenue from the sponsorship feature of Naver TV may not come close to that of K-pop acts’ concerts, fine arts troupes hope to soon establish a sustainable business model for their virtual performances, in order to survive the pandemic.