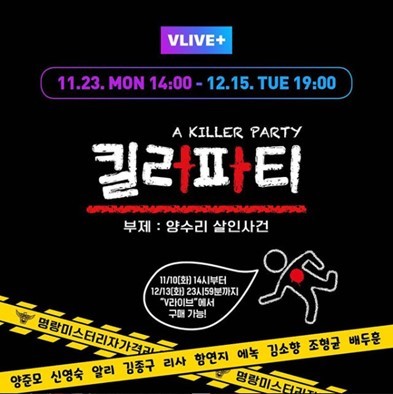 A poster for “A Killer Party” (EMK Entertainment)

A new original musical created to be presented online rather than put on stage is set for release later this month.

While it has become the norm for performing arts production companies to stream their shows online during the pandemic, musicals created for the screen remain a novel idea.

Big-name musical actors including Yang Joon-mo, Shin Young-sook, Ali, Kim Jong-gu and Ham Yeon-ji are a part of the cast.

The musical will be released on the local streaming platform Naver V Live and viewers can purchase tickets for the online show on the platform prior to the release date. Tickets, costing $24 each, can be purchased with V Live Coin, a payment method for V Live contents. The clips will be available for three weeks, from Nov. 23 to Dec. 15.

“A Killer Party” will also be streamed on cable channel Sandbox+ from Nov. 20 to 22 without an additional charge.

The musical, composed by Jason Howland, who also wrote the music for the hit show “The Man Who Laughs,” follows a murder case at a party held at a mansion near Seoul.

According to EMK Entertainment, the cast members practiced the script and numbers individually and gathered only for the recording and filming. Much of the shooting was done at the cast members’ homes. A minimum-sized staff took part in the production in accordance with measures in place to prevent the spread of the novel coronavirus.