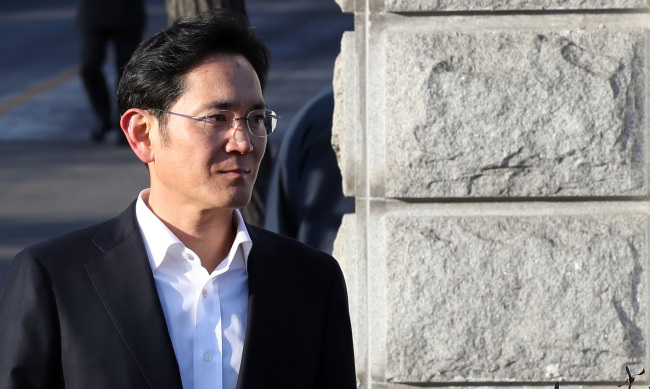 The death Sunday of Samsung Chairman Lee Kun-hee ushers in a new era under his son, the group’s de facto head Lee Jae-yong, but the path forward for the new leader appears fraught with legal challenges.

Lee Jae-yong, the 52-year-old third-generation leader of the country’s largest conglomerate, is currently standing trial in two cases that could send him back to prison and are likely to take years to reach a conclusion.

At the center of the legal disputes is the process by which the younger Lee took over the management role from his father. The cases involve shares worth multiple trillions of won in Samsung subsidiaries.

In May the Samsung Electronics vice chairman pledged to make amends for past wrongdoings, including issues related to the leadership succession and the firm’s past anti-union policy. He also vowed not to hand over management rights over the company to his own children.

Here are the legal battles he has to fight to prove that the Samsung empire has disentangled itself from old-school chaebol practices.

On Monday, the Seoul High Court resumed Lee Jae-yong’s retrial in connection with a corruption scandal involving the impeached President Park Geun-hye. The defendant missed a pretrial hearing on the day, because of his father’s death.

The trial was suspended for nine months after a special investigation team requested a change of judges in January, accusing the previous judge panel of bias toward the accused. But the same judges remain on the panel, as the Supreme Court turned down the request.

In August, the Supreme Court ordered the retrial after concluding that a previous ruling underestimated the amount that Lee Jae-yong had paid in bribes to former President Park and her confidant Choi Soon-sil.

Legal experts expect a final ruling before the end of the year. Whether the company’s business operations under Lee Jae-yong face smooth sailing will depend largely on the court’s decision.

During the hearing on Monday, the court asked for cooperation from both parties to ensure prompt proceedings, including the recommendation of a special commissioner to review Samsung’s law compliance oversight committee.

The next hearing will take place Nov. 9.

The Samsung Electronics vice chairman was released from prison in February 2018 after the Seoul High Court reduced his term from five years to 2 1/2 years and suspended his sentence.

He was convicted of paying 8.6 billion won ($7 million) in bribes to Park and her longtime confidant while seeking government support for his attempt to solidify his control over the Samsung business empire.

The biggest unpredictable variable in Samsung’s new era is the trial that the scion faces in connection with the 2015 merger between Samsung C&T and Cheil Industries. The charges against him include breach of duty and capital market law violations.

The corporate marriage helped the junior Lee, who received 6.1 billion won in seed money from his father in 1995, become the second-wealthiest person in the country in terms of equity ownership, holding stocks worth nearly 7 trillion won.

The bulk of his assets consisted of shares in post-merger Samsung C&T, the de facto holding company of the group. The entity created by the merger retained the name Samsung C&T.

Prosecutors suspect that Lee Jae-yong and former Samsung executives used illegal means to help the scion secure maximum control of the conglomerate at the minimum cost by manipulating the merger ratio for the M&A transaction.

As a part of the merger deal, Samsung C&T offered approximately three shares of its own stock for every share of Cheil Industries.

To arrive at that ratio, prosecutors said the group intervened to inflate the share price of Cheil Industries for Lee Jae-yong, who was the largest shareholder of the firm, while deflating that of Samsung C&T by understating the volume of its overseas construction orders and domestic housing construction contracts.

Another charge that Lee Jae-yong faces is his involvement in alleged accounting fraud by Samsung Biologics, which is suspected of having inflated its valuation by approximately 4.5 trillion won in 2015 to increase the value of Cheil Industries ahead of the controversial merger.

According to People’s Solidarity for Participatory Democracy, a nongovernmental organization, an appropriate merger ratio would have been 1 to 1.18 in favor of Samsung C&T.

“Lee Jae-yong acquired illicit gains of 2 trillion to 3.6 trillion won,” it said, adding that the National Pension Service of Korea, the largest shareholder of the pre-merger Samsung C&T, had lost 330 billion won to 600 billion won as a result.

When prosecutors indicted Lee Jae-yong without physical detention on Sept. 1, they said Samsung had systematically planned the irregularities since 2012 using the code name “Project G.”

During a pretrial hearing on Oct. 22, lawyers representing Samsung said the Project G documents contained nothing illegal. They asserted that the merger was a decision taken for business purposes and all the procedures were carried out legitimately.

A long legal battle is expected, given that prosecutors submitted some 190,000 pages of investigation documents in 368 volumes while Samsung denies all allegations.

A second pretrial hearing is slated for Jan. 14.