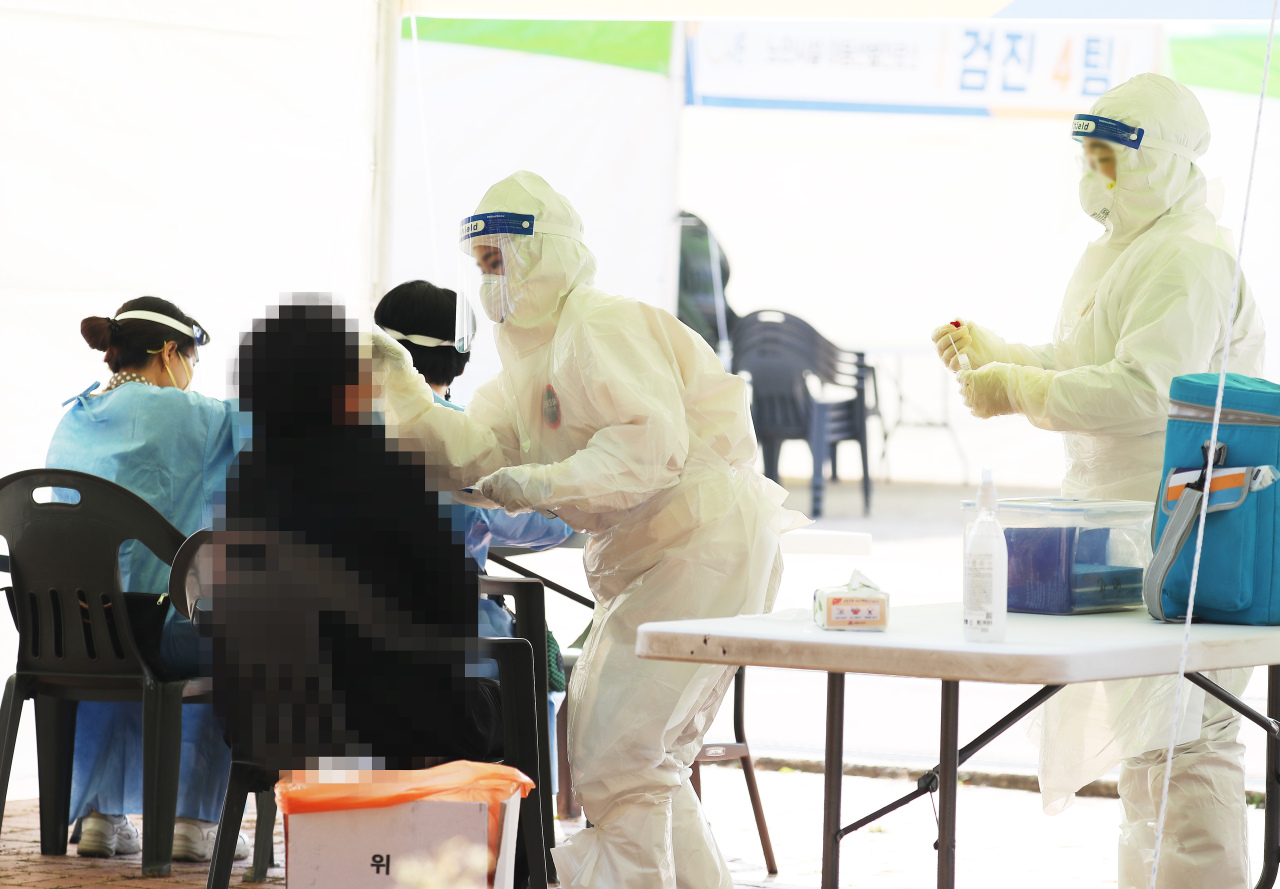 (Yonhap)
South Korea’s new daily COVID-19 cases bounced back to a level not seen in over a month Friday, due to clusters of infections traced to senior care homes and social gatherings, as well as double-digit increases in imported cases.

Korea added 155 new coronavirus cases -- 138 locally transmitted and 17 imported from overseas -- in the 24 hours ending midnight on Thursday, according to the Korea Disease Control and Prevention Agency.

“We are seeing an upward trend in the number of new COVID-19 patients this week with triple-digit increases today and yesterday. The major cause is clusters of infections at high-risk facilities such as nursing hospitals and senior care homes where there are many high-risk groups,” said Yoon Tae-ho, a senior official from the Central Disease Control Headquarters.

The country saw a triple-digit increase in coronavirus cases for the second consecutive day, with 121 cases posted a day earlier. Before that, the country’s daily case count had remained in the double-digit range for six days.

Despite a slight uptick in cases, the country has steadily been bringing the coronavirus situation under control, with the proportion of cases where the infection routes were unknown having dropped to 11.4 percent for the past two weeks, according to the KDCA.

Clusters of infections have been found mainly at hospitals, nursing homes, workplaces and social gatherings across the country.

A new cluster of infections was found among inpatients and employees at a senior care home in Namyangju, Gyeonggi Province, with 35 cases traced to the cluster since the first case was reported Thursday.

Eight more people tested positive for the virus from a medical institution and a nursing facility, both in Gyeonggi Province, stemming from patients infected at a family gathering. The first case was reported Tuesday.

Eighteen more cases were reported from a rehabilitation hospital in Gwangju, Gyeonggi Province, with 124 cases linked to the hospital so far.

In connection to a gathering in southern Seoul and a gathering in Cheonan, South Chungcheong Province, seven and 12 more cases were reported, respectively, bringing their totals of related cases to 25 and 22.

From a clothing company in Yangju, Gyeonggi Province, 11 more cases were reported, pushing up the related cases to 18.

Mass infections had also been found at a cargo terminal at Incheon Airport – 11 cases – and at an office building in Daegu – seven cases – as of Friday.

Of Friday’s locally transmitted cases, the majority were in Greater Seoul -- 19 in Seoul, 98 in Gyeonggi Province, which surrounds the capital, and four in Incheon. Five cases were posted in Daegu, with four each in Gwangju and South Chungcheong Province, two in North Jeolla Province, and one each in Gangwon Province and South Jeolla Province.

Korea reported 17 imported cases. Of them, nine were identified while the individuals were under mandatory self-quarantine in Korea, with the other eight detected during the screening process at the border. Eight cases were from elsewhere in Asia, while six were from the United States and three came from Europe. Of the 17 cases, 11 involved foreign nationals.

The number of COVID-19 patients in serious or critical condition here was 62 as of Friday.

Two more people died from the virus, bringing the death toll to 455. The overall fatality rate is now 1.77 percent.

So far, of the 25,698 people confirmed to have contracted the new coronavirus here, 23,717 have been released from quarantine upon making full recoveries, up 70 from a day earlier. Some 1,526 people are receiving medical treatment under quarantine.

The country carried out 13,296 tests in the past day, with over 2.52 million tests conducted since Jan. 3. Some 20,430 people were awaiting results as of Friday.