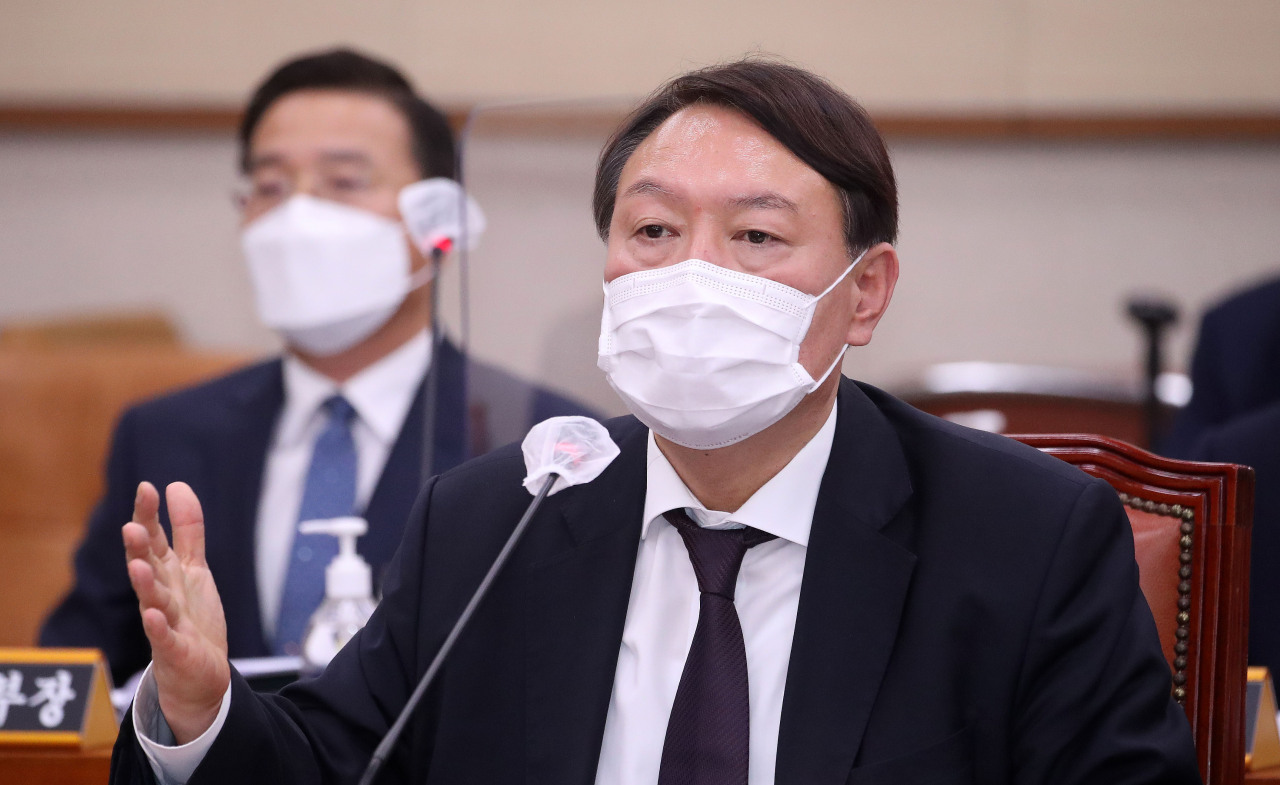 Both Choo and Yoon were elevated to their current posts by President Moon Jae-in, and for similar reasons. Choo, a former judge and five-term lawmaker, was chosen to oversee the prosecutorial reform that started during her predecessor’s term. Yoon was touted by Cheong Wa Dae and the ruling Democratic Party as the “right man” for the same task.

However, the administration’s view that they are, or were, suited to the task is where the similarities end.

In 2013, as the head of the Yeoju branch of the Suwon District Prosecutors’ Office -- a post in Gyeonggi Province where he was supposedly assigned as political revenge for investigating those linked to the Lee Myung-bak administration -- Yoon famously said his loyalty was not to individuals but to his organization. Since rising to prominence in the Moon Jae-in administration, he has stayed true to his words.

Under Yoon’s command, the prosecutors’ office has carried out a number of investigations involving key ruling bloc figures, including former and incumbent justice ministers Cho Kuk and Choo. The timed launch of a sweeping investigation into Cho’s wife, followed by her indictment on the eve of Cho’s parliamentary confirmation hearing, was seen by many in the ruling bloc as an attempt to derail his appointment and thereby derail reform.

Since then, Yoon has collided with the ruling bloc -- most openly with Choo -- earning himself the support of some conservatives. With the opposition bloc lacking a clear option against the ruling party’s two poll leaders -- Rep. Lee Nak-yon and Gyeonggi Province Gov. Lee Jae-myung -- Yoon has even risen as a potential presidential candidate despite never having expressed any desire to enter politics.

In a Gallup Korea survey conducted Oct. 13-15, Yoon was the fourth most popular choice as the next president. Yoon was chosen by 3 percent of the respondents, placing him only 1 percentage point behind Ahn Cheol-soo, chairman of the minor opposition People’s Party and a two-time presidential candidate.

As for Choo, she has reiterated her determination to see through prosecutorial reform on numerous occasions, and has downplayed attacks on her as attempts to sabotage the reform drive. She took over the minister’s office from Cho, who stepped down after only 35 days on the job amid the prosecution’s much-publicized probe of his family.

In her clash with Yoon, Choo has accused Yoon of attempting to lead investigations in a direction unfavorable for the ruling bloc, and of hindering prosecutorial reform. She has used her rights as the justice minister to command investigations on a number of occasions, prompting accusations that Choo is actively trying to undermine and isolate Yoon.

Just as Yoon has gained support from fringe conservatives, Choo is backed by hardcore supporters of the president and the ruling party.

Some have accused Choo, who expressed support for the motion to impeach the late President Roh Moo-hyun in 2004, of attempting to erase the brand of traitor that she earned as a result.

Kim was alluding to Choo’s earlier statement that the prosecutors’ office was deceiving the public with its investigation into allegations of fraud and corruption by an investment fund with alleged ties to the ruling party and Cheong Wa Dae.

In his statement, Kim said Choo was using prosecutorial reform as a tool to further her political ambitions by papering over her involvement in Roh’s impeachment and winning over the Democratic Party’s core supporters.