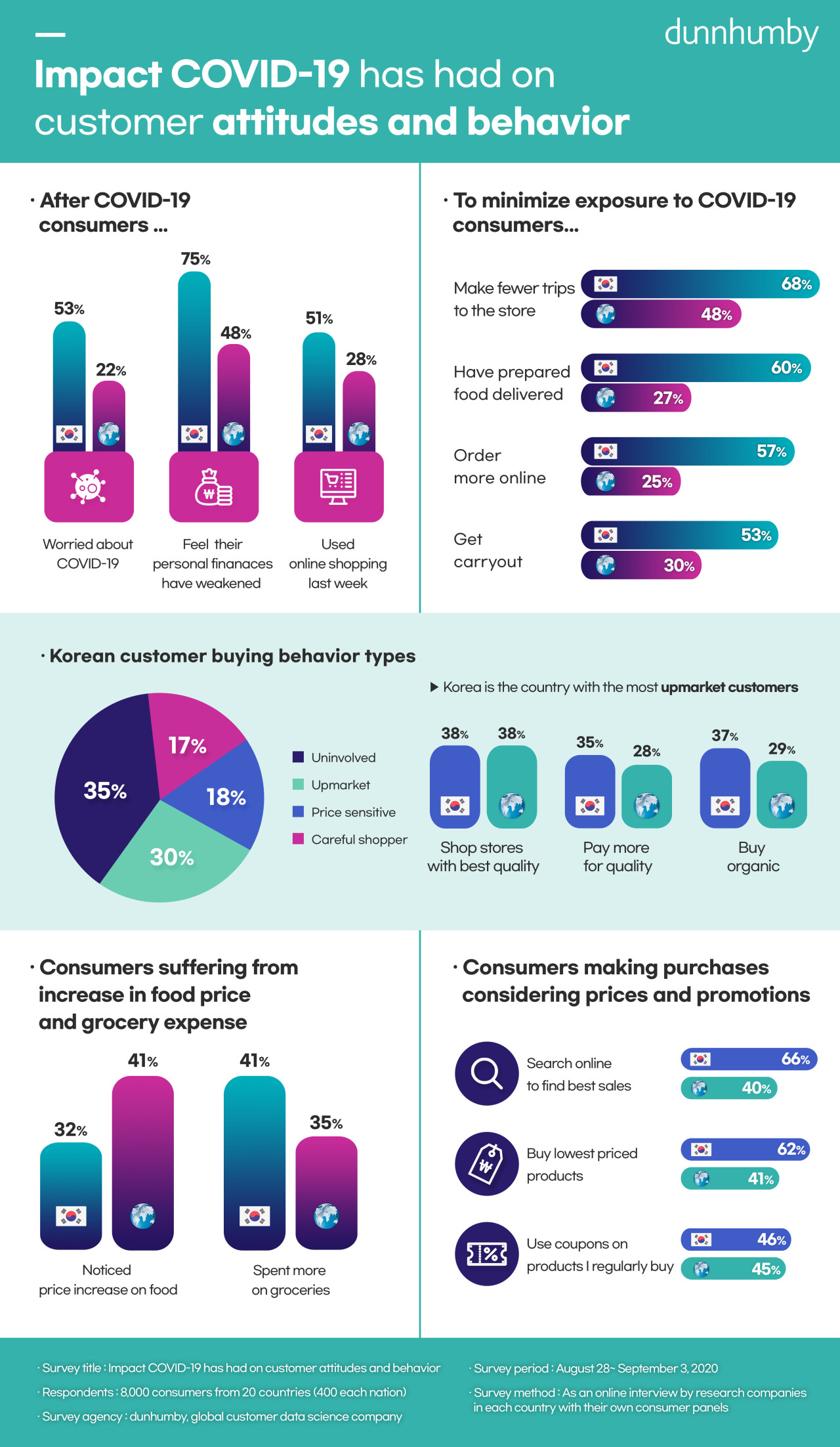 Infographic of survey report “Impact COVID-19 has had on customer attitudes and behavior” by Dunnhumby Korea (Dunnhumby Korea)
South Korean consumers are more worried about COVID-19 than consumers anywhere else in the world, and are also the biggest users of online food services, according to a survey by customer data analysis firm Dunnhumby.

In a survey report released Thursday, titled “Impact COVID-19 has had on customer attitudes and behavior,” Korea was identified as the country with the most worried consumers concerning the COVID-19 outbreak, with respondents saying their personal finances had weakened during the pandemic.

The survey targeted 8,000 consumers from 20 countries impacted by COVID-19 -- about 200 respondents each from six Asian countries, 10 European countries and four countries in the Americas.

Dunnhumby had previously conducted three online surveys on the same topic -- in March, April and May. Its fourth survey was conducted Aug. 28 to Sept. 3.

According to the report, 53 percent of Korean respondents said they were worried about COVID-19 as of September, an 8 percent increase compared with March, when the country ranked fifth on the list.

The result is seen to have been influenced by a sudden increase in the number of confirmed cases and the implementation of stricter Level 2.5 social distancing measures since mid-August, the company explained.

After Korea, Brazil was the country with the next-highest percentage of worried customers, 42 percent. Malaysia, Spain and Mexico followed with 31 percent.

Overall, however, the percentage of consumers worried about COVID-19 decreased globally from 34 percent in March to 22 percent in September, the company said.

In addition, Korean consumers were the No. 1 users of food delivery services and online grocery shopping, with 60 percent of the respondents saying they used those services. This was 33 percent and 32 percent higher, respectively, than the global averages, the company said.

“However, despite the difficult situation, the majority of Korean consumers still focusing on quality means retailers need to understand customer’s shopping behavior and preference, offer personalized service to provide new experience and satisfaction.”