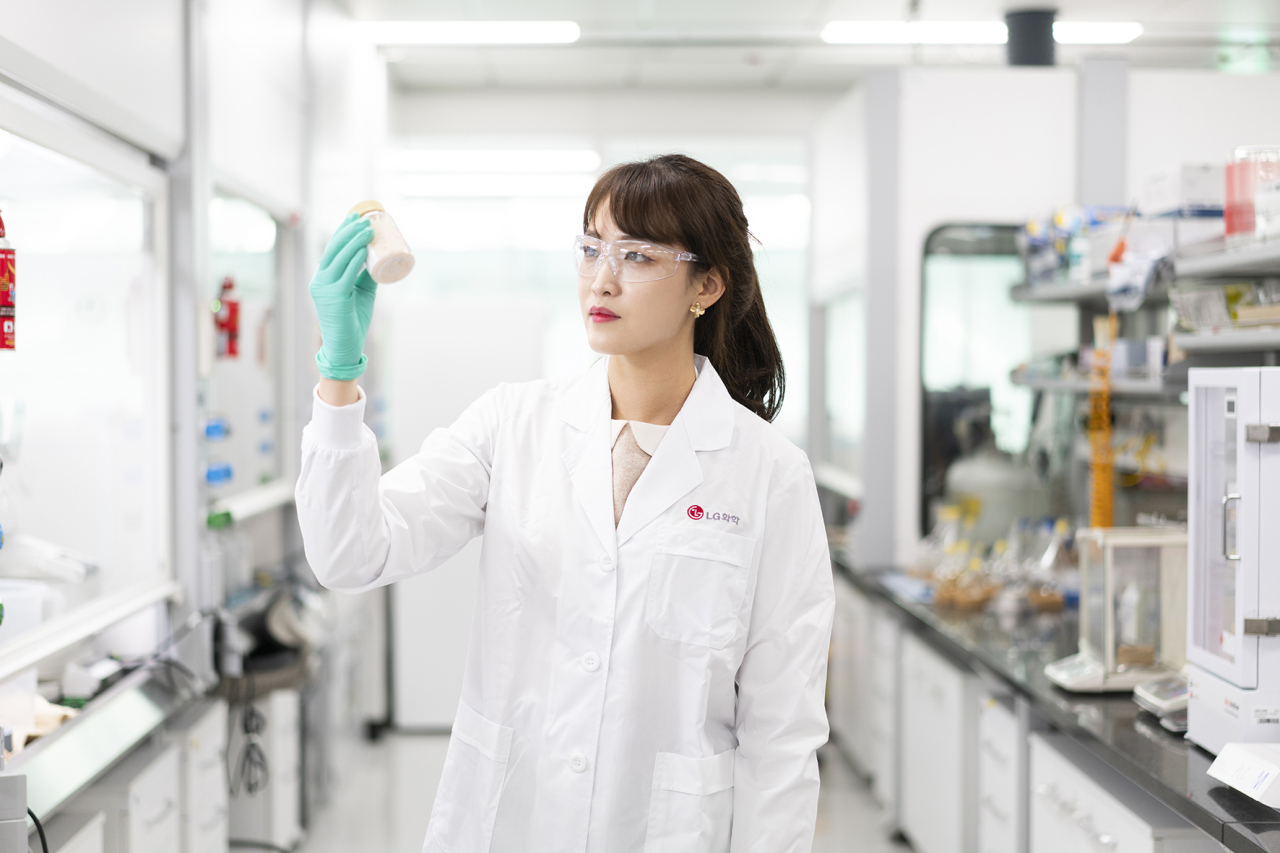 (LG Chem)
Many may have forgotten, but LG Chem was once the center of Korean bio innovations -- and it is taking steps to get back in the game where new players Samsung and SK are now making strides.

In the latest, groundbreaking announcement for shareholders, LG Chem said it will separate its cash cow battery business and focus on promoting the balanced triangular growth of its petrochemicals, advanced materials and life sciences businesses.

Shareholders are noticeably displeased with the company’s plans, and LG Chem is working to persuade them that the value of their shares will not erode once energy solutions are lifted from its direct business portfolio.

In mid-September LG Chem announced the staggering decision to split off its battery business to a whole new entity called LG Energy Solution.

The plan did not please many LG Chem shareholders whose investments had been based on the company’s title as the world’s No. 1 electric vehicle battery producer in terms of volume and one of the three suppliers to none other than the controversial Tesla.

As if to appease irate shareholders, LG Chem’s surprise third-quarter earnings report showed that its petrochemicals division accounted for the lion’s share of its robust quarterly performance.

LG Chem on Wednesday filed a record quarterly report of 7.5 trillion won ($6.6 billion) in revenue and 902.1 billion won in operating profit. Compared to the same period a year before, the revenue increased 8.8 percent and operating profit jumped 158.7 percent.

ABS is the material used for household electronic appliances such as televisions, refrigerators and washing machines. Due to the COVID-19 pandemic, many people spent more time at home, leading to purchases of more appliances and hiking demand for ABS.

PE, which is used for single-use sanitary gloves, and PVC, which is used in takeaway delivery containers, also benefited unexpectedly from the pandemic.

Some have seen the petrochemicals prowess as LG Chem’s true colors shining through.

Those unfamiliar with LG Chem think the company’s best asset is its energy solutions business and petrochemicals. And while those claims ring true, LG Chem’s drive to reignite biologics research and development sheds new light on the company’s disregarded former glory.

LG’s life sciences business came to life nearly 40 years ago in 1984 when it established the pharmaceuticals business division. By history, LG has a longer track record than Samsung Biologics, Celltrion or SK Biopharmaceuticals.

But between the ridges of its history, LG’s life sciences business faltered on dragged-out losses.

The nature of novel drug research is a time-consuming and extravagant ordeal that may never bear fruit. LG, once a daring innovator, decided to divest from novel drugs and focus on chemical drugs which require less effort and are faster to commercialize.

This curtail on innovation had prompted a mass exodus of LG Chem’s biologics researchers who went and founded their own biotech firms.

In Pangyo, Gyeonggi Province, where bio startups have found their nests, it is no understatement to say the vast majority have been founded by former LG Chem researchers.

In the years since LG has turned attention away from biologics, the tide has turned.

Heads of Korea’s corporate businesses are stressing the importance of the biologics drug industry as a future growth generator in the “fourth industrial revolution” era.

Equal sentiment is resonated by SK Chairperson Chey Tae-won, whose emphasis on biologics is prompting SK’s countless subsidiaries to take in a bio drug pipeline or two to pursue research. SK Biopharmaceuticals, having bagged two FDA approvals for neurological disorders treatments, made a strong initial public offering in 2020. SK Bioscience, a vaccine maker, is readying to list on the stock market in 2021.

This movement is only expedited with the latest COVID-19 pandemic that has shone a new light on health care.

It is common for pharmaceuticals to redirect 20 percent of their annual revenue to R&D. LG Chem’s 2019 R&D budget was 26 percent of the previous year’s revenue. The size of investments will only increase -- at the start of the year, LG Chem said it plans to invest roughly 200 billion won in R&D for 2020, which is 30 percent of its expected revenue of 660 billion won.

Kiwoom Securities’ report dated September 2020 analyzes that the increased R&D will affect LG Chem’s pipeline performance greatly in the mid- to long-term, as it is paramount to invest in R&D for any biologics business to move forward.

In 2019, LG Chem established its Life Sciences Innovation Center in Boston, where there is a cluster of biologics research infrastructure and talents.

Since it has begun bolstering bio, LG Chem has grown a surprisingly diverse portfolio that may even work adversely to the company for its seeming indecisiveness in selection and focus.

The company has yet to find a solid identity for itself, while peers Samsung Biologics, Celltrion and SK Biopharmaceuticals have respectively claimed themselves as a contract manufacturing and development organization, a biosimilars maker and a neurological disorder treatment specialist.

LG Chem asserts its primary focus is in drugs for cancer, immune disorders and diabetes, but at this point in research, whichever pipeline that succeeds first will set the tone for future research.

It also has a degenerative disease treatment pipeline in the preclinical phase with Medipost, and an orphan drug pipeline for obesity in the US.

It its latest notice, LG Chem announced it would add speed to research for NASH treatment pipelines respectively licensed in from Sweden’s Sprint Biosciences and China’s TransThera Biosciences.

In another notice, LG Chem said that it signed a memorandum of understanding effective Oct. 5. to develop a COVID-19 vaccine with Cellid.