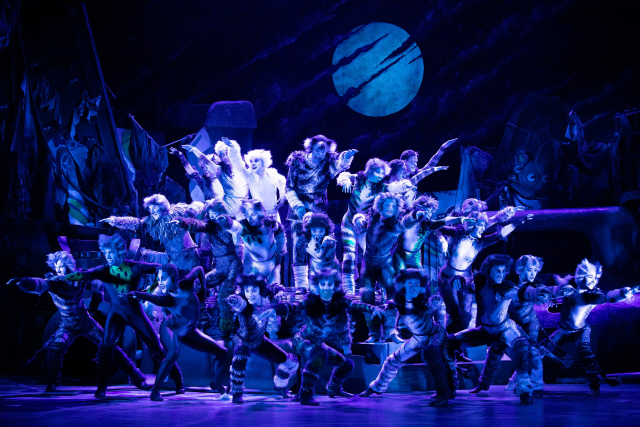 Scene from musical “Cats” (S&Co)
The international tour production of “Cats” will extend its Seoul run for a month.

The West End musical opened Sept. 9 at the Charlotte Theater in eastern Seoul. Though initially slated to run until Nov. 8, the show will now close on Dec. 6.

After the Seoul run, the musical will tour Korea, though details of that have yet to be finalized.

Adjusting to the time of the novel coronavirus, the musical sold half of the 1,241 available seats. Cast members also wore masks featuring catlike makeup for the opening scene, in part of safety measures against the spread of the COVID-19.

“Cats” is an iconic musical created by composer Andrew Lloyd Webber and producer Cameron Mackintosh. The show tells the tales of a cat tribe named the Jellicles. Counted as one of the “big four” musicals, it has been performed across the world and won numerous awards, including the Laurence Olivier and Tony Awards.

Meanwhile, musicals across the world continue to be on hold due to the COVID-19 pandemic. The Broadway League announced Friday that the Broadway theaters will remain shut until May 2021.