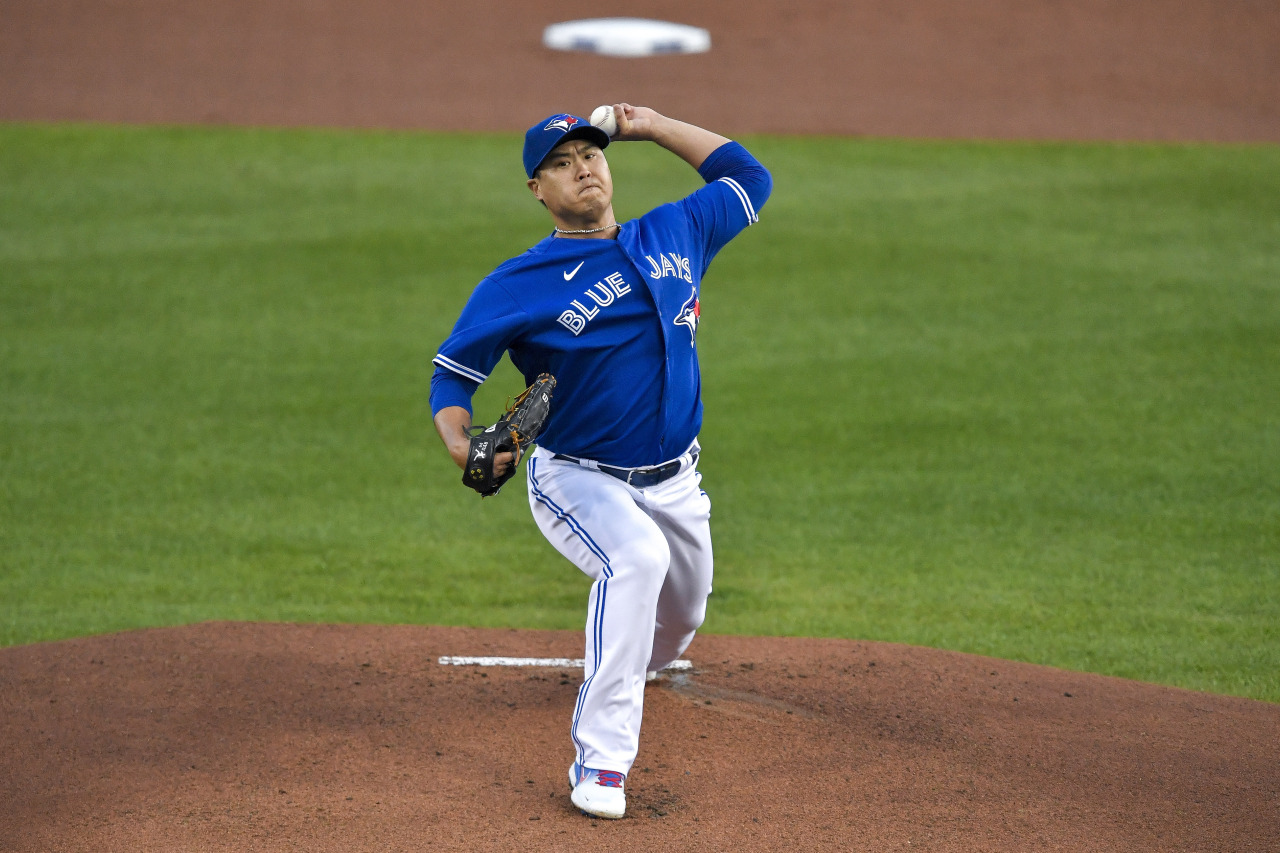 (AP-Yonhap)
When the team needed him the most, Ryu Hyun-jin rose to the occasion.

With the Toronto Blue Jays a win away from clinching their first postseason in four years, Ryu threw seven scoreless innings for a 4-1 victory over the New York Yankees at Sahlen Field in Buffalo, New York, on Thursday (local time).

In the process, Ryu also exorcised his personal demons against the Yankees. It was his first career win over the Bronx Bombers in four career starts. In three previous outings, Ryu had gone 0-2 with an 8.80 ERA, with seven home runs served up in 15 1/3 innings.

Ryu mostly cruised through the first five frames, surviving two-out hits in the second and the third innings.

Some trouble brewed in the sixth inning, when Ryu was facing the heart of the Yankees lineup for the third time.

Analytics show starters typically struggle when they face hitters for a third time in the same game. Ryu himself hadn't been immune from that "third time through the order" penalty. Prior to this game, opponents were batting .326/.367/.500 in their third plate appearances against Ryu in a game, compared to a .191/.232/.309 line the first time against him and .244/.306/.356 their second time up.

True to form, the first two Yankees in the sixth, Luke Voit and Aaron Hicks, hit singles. But Ryu saved his best for three dangerous hitters and escaped the jam unscathed.

Ryu struck out homer-threat Giancarlo Stanton on three straight fastballs on the inside. Gleyber Torres flied out to right field, and Gio Urshela, who'd doubled off Ryu in the second inning, grounded out weakly to second base.

With his pitch count at just 85 through six frames, Ryu came back out for the seventh, becoming the first Toronto starter to go that deep all season.

Clint Frazier opened that inning with a single, but no further damage was done. After a flyout, Ryu faced slugger Aaron Judge coming off the bench. Ryu fell behind 2-0, but Judge swung on an inside fastball and flied out to right.

DJ LeMahieu came up for the fourth time against Ryu, but he too flied out to right field on Ryu's 100th pitch of the game.

Ryu's job was done. The Blue Jays added two more runs on a double by rookie Alejandro Kirk. The bullpen survived some nervy moments in the eighth, with Anthony Bass walking the bases loaded and Rafael Dolis cleaning up the mess, and the Blue Jays held on for a 4-1 victory.

Ryu said afterward he was pleased to have delivered the key win for the team.

"This was an important day for the team, and I am so happy I got the job done," Ryu said in his postgame Zoom session. "This victory feels more gratifying than others."

He also thanked his teammates for adhering to COVID-19 quarantine guidelines and being "responsible" professionals throughout the season. The season began belatedly in July, and the schedule was shortened to 60 games due to the pandemic. Some teams had to cope with outbreaks that forced them into an extended hiatus earlier in the season.

As for finally getting the better of the Yankees, Ryu said: "This win was a huge confidence boost for me. It was great to wash away some bad memories from last year and this year (against the Yankees)."

In many ways, this was a vintage Ryu performance. He mixed up five different pitches, relying most heavily on his cutter (38), and the unpredictable pitching sequence kept hitters off balance and induced a lot of soft contact. (Yonhap)