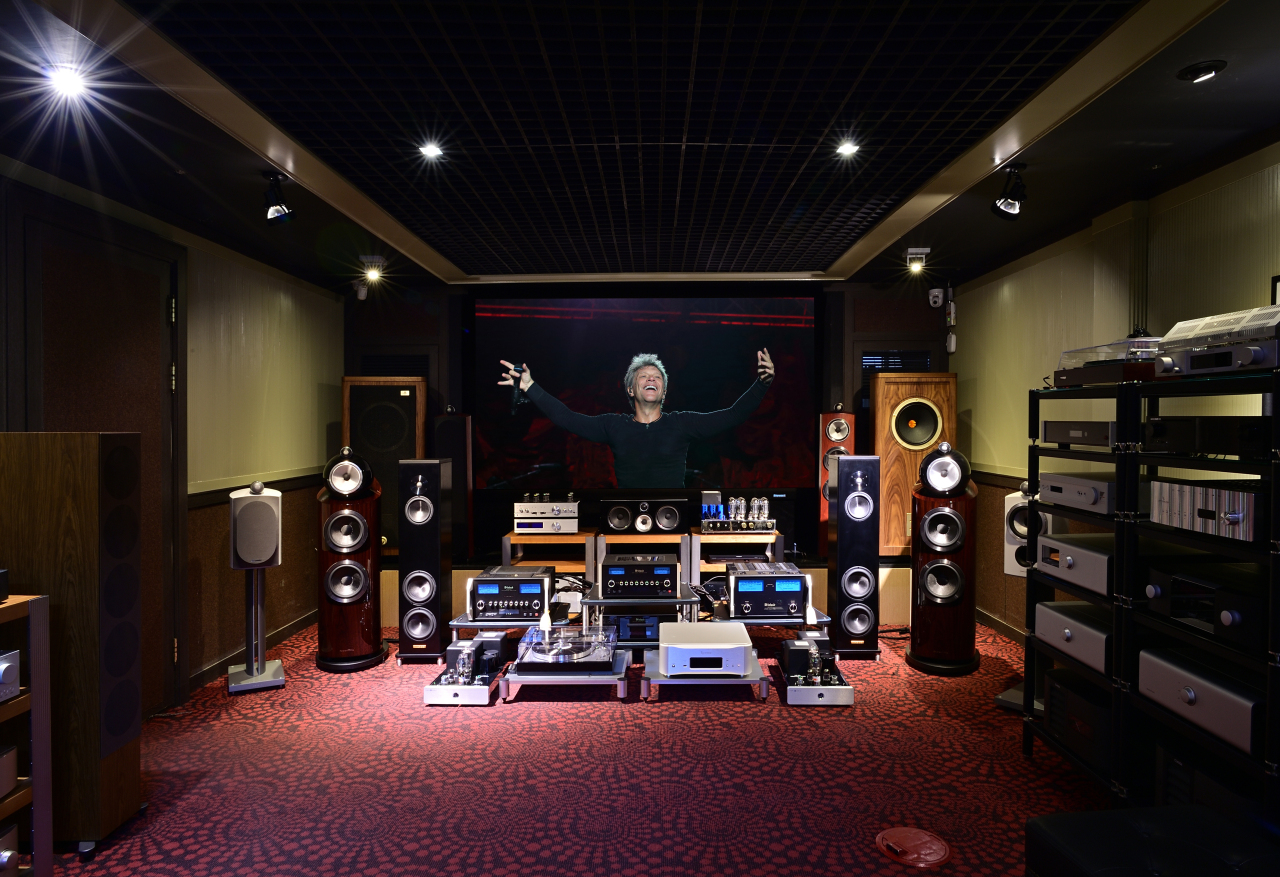 Home theater speakers are on sale at AV Plaza near the Nambu Bus Terminal in southern Seoul. (AV Plaza)
People all over the world have been stuck at home for several months now due to COVID-19. More and more concerts and performances have moved online, and some movies have been released on Netflix or other online content platforms exclusively or prior to opening in theaters. With myriad offerings available in these quarantine times, some people are looking to enhance the online experience by setting up sound systems for their homes.

The visual experience of an online performance can also be enhanced with the use of a home projector, which requires installing a white screen or wall and curtains to keep the room sufficiently dim. A wide-screen television, which many households already have, is sufficient for most people, according to those in the home theater business.

For those unfamiliar with sound systems, a sound system configuration is usually a measure of how many speakers are supported.

The most common speaker configuration for home theaters is 5.1. These systems have a center speaker, directly in front of the listener; two front speakers to the left and right; and two rear speakers. The .1 stands for the subwoofer, a speaker that handles low-frequency sound from no direction in particular, making its position in the room flexible. This configuration allows listeners to experience sound with greater spatial depth. In contrast, a 2.1 system has only two front speakers and one subwoofer.

Dolby Atmos, a surround sound technology developed by Dolby Laboratories, provides height to the sound by adding two to four additional speakers on the ceiling. The configuration would be 5.1.2.

The next common configuration, 7.1, adds two speakers behind the listener to the left and right to give even more sense of space to the sound. Dolby provides guidelines and the exact angles for the setup of speakers on its website. 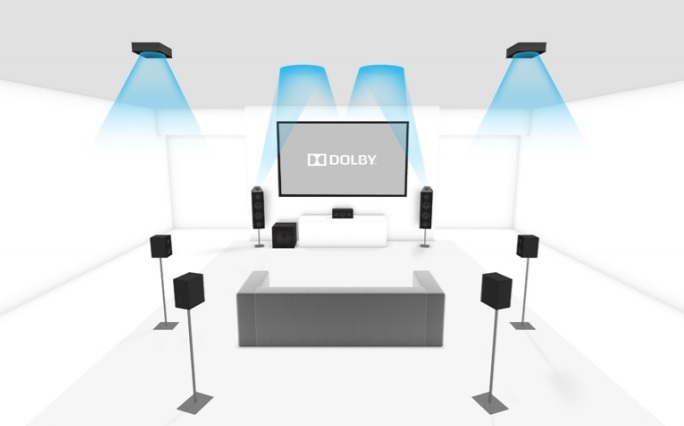 This image shows the setup of a 7.1.4-channel home theater. (Dolby Laboratories)
“7.2.4 is typically considered the ultimate setup for home theaters with two subwoofer speakers and four overhead speakers,” said Jung Young-han of AV Plaza, which specializes in setting up sound systems.

People with home theaters who have installed these speaker configurations expressed satisfaction with the different levels of sound they can enjoy, especially stuck at home during the COVID-19 pandemic.

“I am very pleased with the depth and detail of the sound,” said Hong Sok-jin, who lives in Suwon, Gyeonggi Province. “I had dreamt of setting up a home theater since I was little because I like movies so much. I can experience the immersion and realism as if I were in a movie theater.”

While home theater systems reached the height of their popularity around the early and mid-2010s, the market has been in decline ever since Blu-ray and DVDs went out of fashion -- though many Netflix original shows support the many sound channels.

“Two major reasons why people hesitate about setting up a home theater system are the high entry cost and the trouble of setting one up,” said Jung.

A sound system for a typical home theater easily runs well over 10 million won ($8,580), and more speakers means higher prices. Another problem is that the primary customers, men in their 30s and 40s, often have wives who are opposed to spending so much on sound equipment. Also, families with young children are concerned about children messing with the speakers or the cables.

Setting up a home theater is a lot of work, as cables for the rear and side speakers usually need to go around the room. Although it would be ideal to plant the cables in the walls, this isn’t possible in a typical Korean home. Noise complaints from neighbors can also be an issue. To top it off, a home theater can become a major headache when a family moves house.

Because of these limitations, the home theater market became the territory of passionate sound system devotees. But that’s changing due to COVID-19.

Sound bars were taking over the market even before COVID-19. Sound bars are all-inclusive speakers that trick listeners into thinking the sound is coming from all angles, imitating the home theater experience. 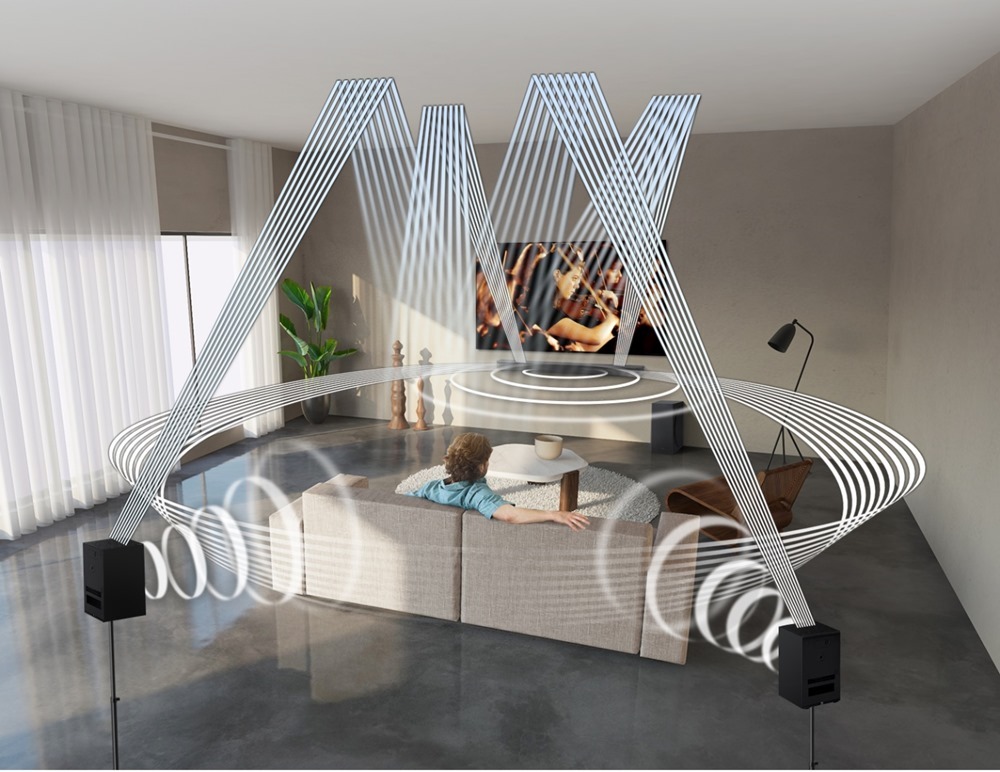 This illustration shows how a sound bar works. (Samsung Electronics)
“The reason for the popularity of sound bars is due to their convenience and affordable price compared to home theaters. Sound bars complement TVs, which have become thinner and as a result don’t have very good sound,” said Jung.

Major digital and home appliance companies like LG and Samsung have released new products since the spread of COVID-19.

Samsung, which has the largest share of the global sound bar market at 21.8 percent in 2019 according to market analysis company FutureSource, released a premium sound bar in July that boasts 9.1.4 channels, while LG has released an award-winning sound bar acclaimed for its design.

“I like watching movies and listening to music, so I bought the sound bar while browsing through Wadiz,” said Song Chang-suk from Gyeonggi Province. “It said it was good for beginners and cost only 200,000 won.”

Setting up a sound bar is also straightforward, making it even more appealing to beginners craving a fuller digital experience.

Cho also uses the sound bar to enhance his experience playing games on his Play Station.

Difficulty in going to theaters was another reason for the purchase of sound bars.

“I can’t really tell the difference when I watch TV shows but when I watch movies or dramas that have lots of music, the difference is apparent,” said Roh Ji-soo from Gyeonggi Province. “As I spend more time at home due to COVID-19 and my young children make trips to the theaters difficult, a wide-screen TV and sound bar raise my quality of life.”

Still, people who have experienced both sound bars and home theaters expressed the view that sound bars have yet to catch up.

“The quality of sound from a home theater is incomparable to that of regular TV speakers or sound bars,” said Song.

“Once you hear them side by side, you’ll know, especially in music performances and movies,” said Jung. “Not many people besides sound geeks now know of the home theater market, but I hope COVID-19 brings it more to light.”