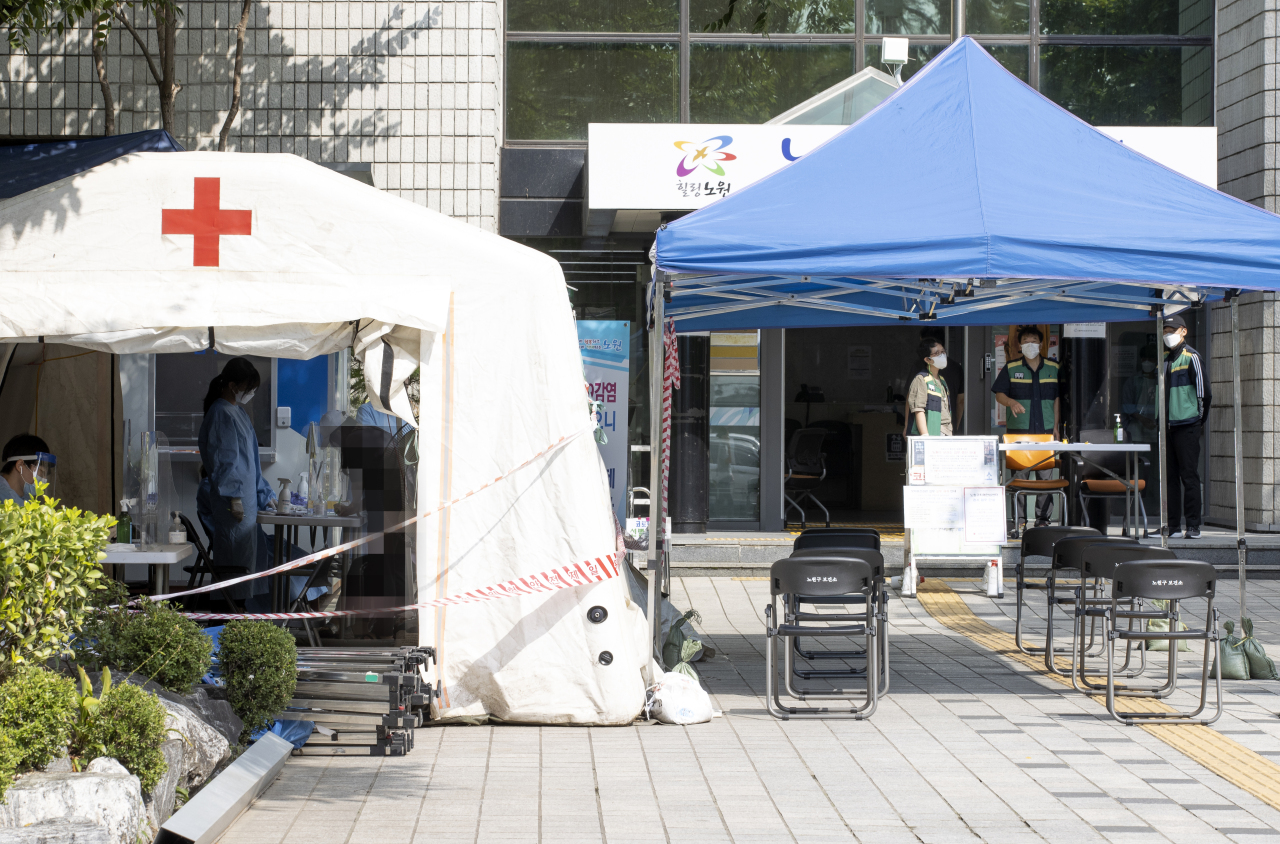 A visitor consults with a medical worker at a COVID-19 testing station at a community health center in Seoul earlier this week when the number of new cases stood at 109, including 11 entrants from abroad, marking the 12th consecutive day the figure had stayed in the 100 level. (Yonhap)

South Korea's new coronavirus cases stayed in the 100s for the 17th consecutive day on Saturday, with local infections unabated in the greater Seoul area.

The country added 110 more COVID-19 cases in the past 24 hours, taking the total caseload to 22,893, according to the Korea Disease Control and Prevention Agency (KDCA).

The new cases mark a decline from 126 reported Friday but are higher than Tuesday's 106. Of the new cases, 106 were locally transmitted and the rest came from overseas. The death toll rose by one to 378.

Authorities are still struggling to bring the outbreak under control amid little signs of a significant slowdown in sight, as sporadic cluster infections tied to offices, churches, a nursing home and an auto factory continue to occur in the metropolitan areas.

Of the new 106 local cases, 38 came from Seoul, 41 from the surrounding Gyeonggi Province and 11 from Incheon, west of the capital. The cumulative caseload from the capital region is nearing 10,000.

The country's outbreak trend has been on a downward trajectory due to tougher social distancing rules that had been enforced until last week to contain the resurgence sparked by church gatherings and political rallies in mid-August.

The daily new cases peaked at 441 on Aug. 27, before gradually falling below 200. New case numbers are still far higher than 30-50 counted prior to the resurgence. The daily caseload dropped to single digits in early May.

From earlier this week, the government relaxed the tougher virus curbs for the next two weeks, allowing smaller businesses to run till late hours and restaurants and cafes to operate as usual in the face of growing concerns that the tougher measures will further hurt the economy already blighted by the pandemic.

The biggest task for the health authorities now is to prevent a potential rebound in new virus cases around the upcoming Chuseok fall harvest holiday that falls later this month, a tradition that entails mass movements of people and family gatherings.

The government again urged citizens Saturday to refrain from gathering and traveling during the holiday.

"Making contact at crowded tourist sites raises transmission risks. I ask everyone to refrain from visiting your hometowns and traveling so as not to turn this Chuseok into a trigger for more infection spread," Second Vice Health Minister Kang Do-tae said in a government response meeting.

A poll showed Thursday that only 16 percent of the respondents said they will travel to their hometowns for this year's Chuseok.

A total of 19,970 people have been released from quarantine after making full recoveries, up 199 from the previous day.