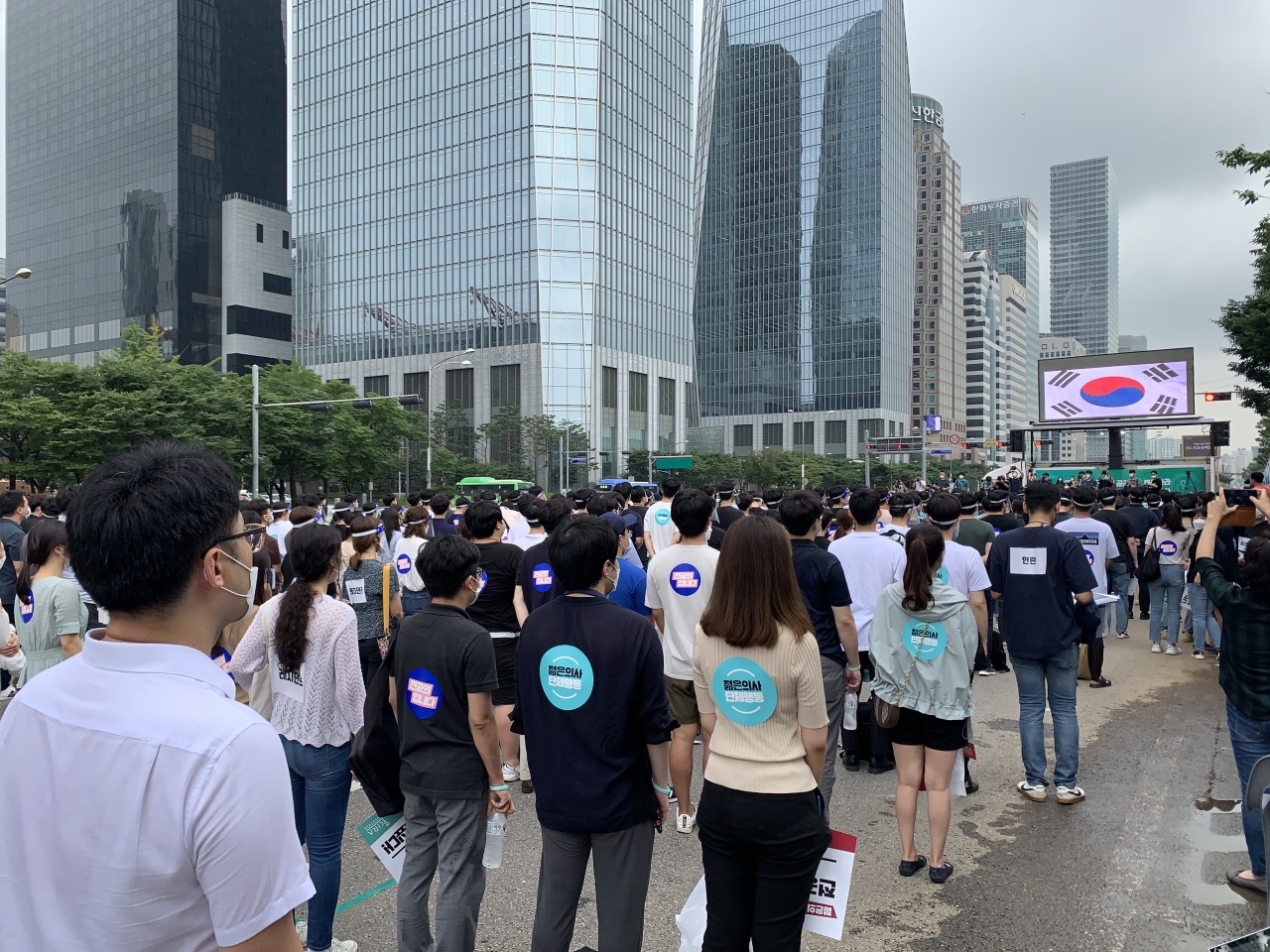 Young doctors marched on the streets of Yeouido, Seoul, on Friday, in protest of the government's plan to reform the way the country recruits and utilizes its medical workforce. (Kim Arin/The Korea Herald)
Last Friday, thousands of young doctors and medical students took to the streets in Yeouido, Seoul, to protest the government’s plans for recruiting and utilizing health care workforce. Another walkout by doctors of all grades is slated for this coming Friday.

In a statement released Tuesday afternoon, 95 percent of around 7,000 doctors in residency said they would partake in the upcoming walkout, if the talks between the medical community and the government fall through.

At the center of the contention is a plan to recruit some 4,000 more doctors between 2022-32, about three-quarters of whom will be deployed in rural parts of the country for at least 10 years.

The Ministry of Health and Welfare estimates Korea needs about 60,000 more doctors. “The number of doctors per 1,000 people in Korea is 2.3, which is far below the OECD (Organization of Economic Cooperation and Development) average of 3.4,” said Kim Heon-joo, the ministry’s director general for health care policy.

“The ministry, as well as the rest of the government, is convinced that expanding the medical workforce is inevitable,” he said.

Adding more doctors is the “cheapest solution” to the challenges of the country’s rural medicine, according to doctors and medical students.

A medical student at a Seoul university said, “This will only allow hospitals to use doctors at cheaper costs without improving wages or unfair labor practices.” The 80-hour weekly limit is still seldom observed at hospitals. 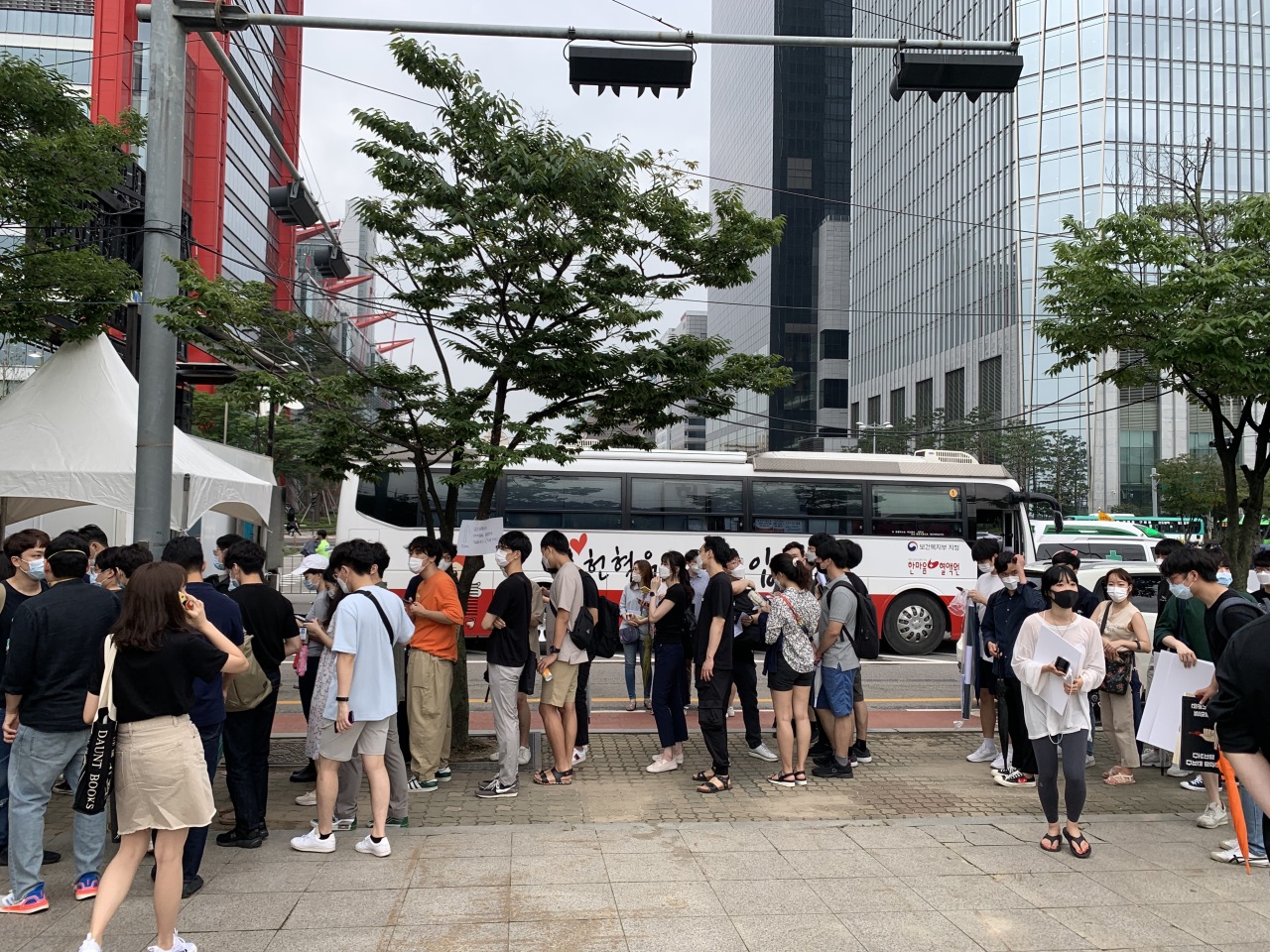 Junior doctors line up to get their symptoms checked before they participate in the march. Behind them is a blood donation vehicle where the young doctors donated blood. (Kim Arin/The Korea Herald)
“Hospitals and health centers will get to hire the newly minted doctors without fixing the problems that keep young students from pursuing rural practice in the first place,” said an internal medicine specialist whose office is in Yongsan, a central Seoul district.

He also pointed out that Korea had already tried rural rotations program in the past, which failed to retain young doctors because of “poor working conditions” and "little to no career paths.” “After the 10 years' term expires, there will be nothing that stops them from moving to big cities and taking up private practice. And who can blame them?”

Anger and frustration were palpable among doctors as the highly contested plan arrived at a time when they, along with nurses and other health workers, have been fighting COVID-19 on the frontlines for over six months.

Dr. Kim Eun-yong, a general practitioner in Daegu, said small clinics have already been struggling even before the coronavirus, having to compete with big hospitals.

“Most clinics in Daegu have not recovered from the earlier outbreak, and the relief checks from the government are barely enough to cover for the months of damages,” he said, adding that the government announcement “felt like a blow that couldn’t have come at a tougher time.”

He said he as well as his colleagues still have not been remunerated for their part in the fight. “Supporting the health workers who had a role in the pandemic with proper pay seems to be a more pressing agenda than expanding medical schools,” he said.

Doctors said the new policies were not communicated to them before they were announced.

Cardiologist Dr. Kim In-cheol at Daegu’s Keimyung University Dongsan Hospital, a coronavirus-only institution, said he “did not feel like the voices from the field were being appreciated” by the government.

“I think doctors should have been given a chance to be heard, or at least informed in advance of the policies that affect them most -- as opposed to finding out about them in the news like everyone else.”

Ahead of the walkout, doctors said critical and urgent care will not be disrupted, and that surgeries and appointments would run as normal. “Patients, as innocent third parties, should not suffer any harm,” said representatives of doctor groups.

Still, public reception has not been all warm.

“What is wrong with having more doctors? To be honest I don’t understand all the ruckus around it,” said Yun Ji-hwan, 49, who was visiting a mall near the march site on Friday. “I think the doctors are protecting their own rights rather than those of patients,” said another passerby in her 30s who asked not to be named.

Minister of Health Park Neung-hoo said in an address  last Thursday that doctors who participate in the strikes were “jeopardizing public health and safety,” urging them to cancel. “Under no circumstances can we let health and safety of our people to come under threat. The government will not allow it,” he said.

The minister’s remarks stoked a sense of betrayal among medical workers, said a primary physician in Busan who was one of over 900 doctors who rushed to Daegu at the outbreak’s worst in March.

He said the doctors were facing “accusations of being selfish before the dust of the coronavirus has even settled.”

“In the minister’s address last week, I thought he was going to offer some convincing explanations for the way the decisions had been reached or provide some clear data as to why they need to be done,” he said.

“But what he did instead was to claim the moral high ground and turn the public sentiments against doctors.”

He said when the president of the Daegu medical association Lee Seong-gu pleaded for help at the brink of a health system collapse in late February, hundreds of doctors from outside the virus-stricken city stepped up to volunteer.

“We are the same doctors who turned toward harm’s way in March when no politicians wanted to come near. I think our voices deserve to be heard.”