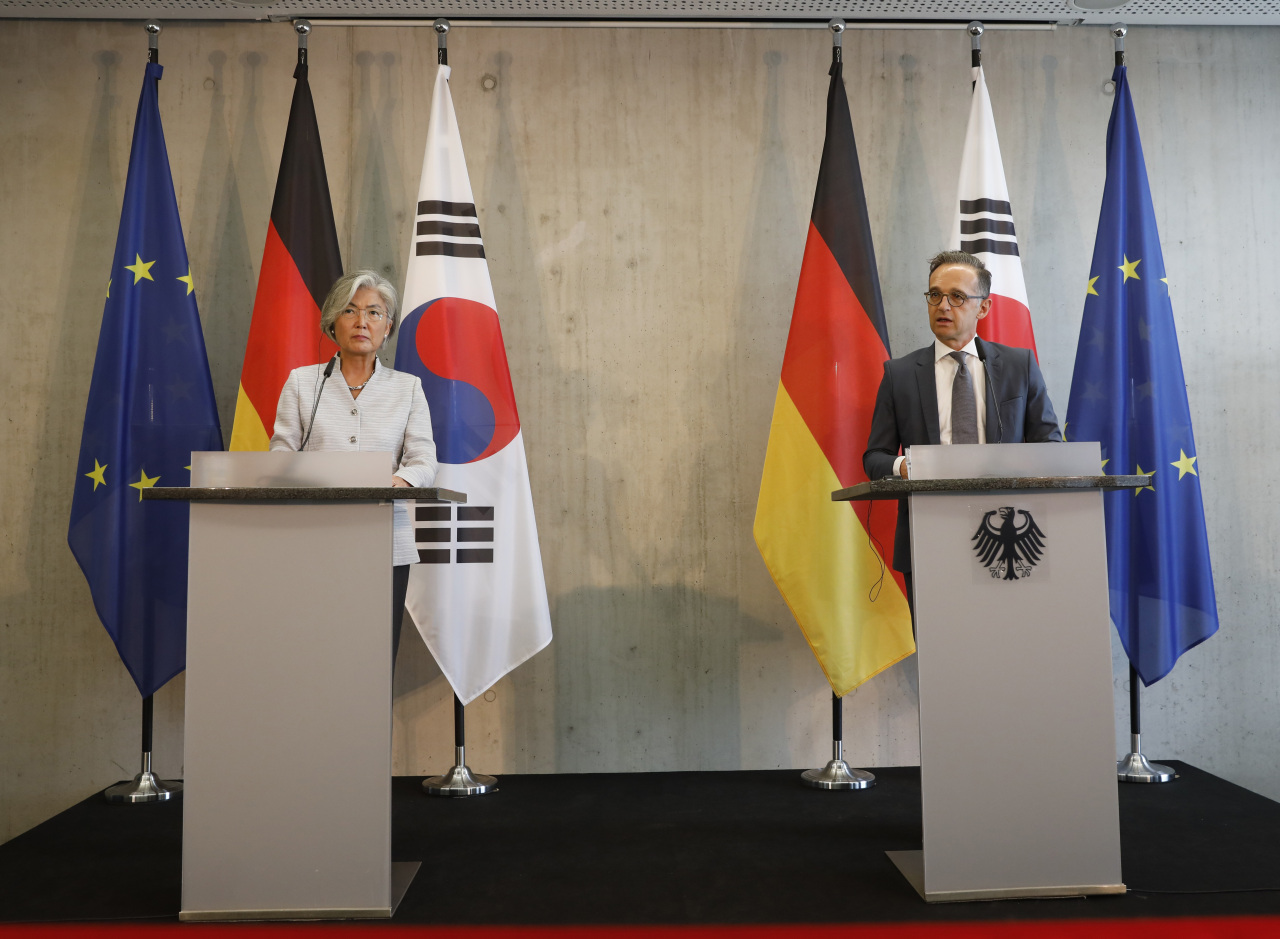 South Korean Foreign Minister Kang Kyung-wha (left) and her German counterpart Heiko Maas brief the media during a news conference in Berlin, Germany, Monday. (AP/Yonhap)
While Germany welcomes South Korea’s participation in an upcoming Group of Seven summit in the US, it opposes the expansion of the setting if Russia is readmitted, the Foreign Ministry in Seoul quoted the country’s Foreign Minister Heiko Maas as saying.

Maas made the remarks during his meeting in Berlin on Monday (local time) with South Korean counterpart Kang Kyung-wha.

The German official called South Korea an “important country in the world that shares values with Germany,” and said he very much welcomed Seoul’s participation in the G-7 summit if the meeting is held in autumn, the ministry said in Seoul.

Kang, in response, said South Korea welcomed the invitation and would actively take part in the forum.

But as to whether the invitation is a one-off thing or the membership could be expanded permanently, Kang said they are two separate issues.

“Minister Maas explained that much discussion and study among member states are needed (on expanding the G-7) and I fully agreed to that,” she told reporters upon arriving at the Incheon International Airport on Tuesday. “We are a country with ability and capacity to fully contribute regarding this year’s biggest subject of COVID-19, and there will be agendas each year that we can contribute.”

During the press conference, Maas, however, made clear that Germany is against expanding the forum if it involves accepting Russia back in, calling on Moscow to resolve the issues of annexing Crimea and conflict in Eastern Ukraine first.

Russia was originally part of the then-called G-8 group, but was kicked out in 2014 after annexing the Crimea region from Ukraine, and the name was changed to G-7 -- which includes the US, Germany, France, the UK, Italy, Japan and Canada.

Expanding the G-7 to include South Korea, Australia, Russia and India was an idea floated in May by US President Donald Trump, who is chairing this year’s meeting of the group.

The meeting was slated to be held in Washington in September after it was delayed from June due to the coronavirus pandemic. But on Monday, Trump said he was considering hosting the G-7 meeting after the presidential election in November, further pushing back the schedule.

“I’m much more inclined to do it sometime after the election,” he said during a White House press briefing. “We could do it through teleconference, or through a meeting, but I sort of am now suggesting, I tell my people yesterday, ‘Actually, why don’t we do it sometime after the election when things are a bit, you have a little more time to think about it because it’s very important,’” he said.

Trump reiterated he would invite “certain people” that are not part of the group.

“Some people have already accepted, but we are going to be doing it after the election. I think it’s a better, calmer atmosphere to have a G-7.”

When asked whether he would invite Russian President Vladmir Putin, Trump said he would do so because Putin is an “important factor.”

But Trump’s invitation to Russia has drawn the ire of some member states, including the UK, Canada and Germany, which have said they would not support Russia’s return to the forum earlier in June.

Japan also voiced its objection to expanding the group, with its top government spokesman Yoshihide Suga on Tuesday saying it was extremely important to maintain the framework of G-7 meetings.