Mayor Park says sorry in will 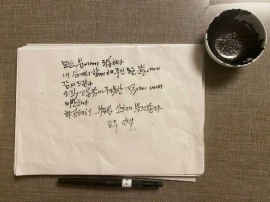 A note is found on Park Won-soon’s desk. (Yonhap)

Seoul Mayor Park Won-soon’s will was revealed Friday, a day after he was found dead in an apparent suicide.

“I’m sorry to everyone. I’m grateful for all the people who I shared my life with,” he wrote in a note left on his desk at home, which was revealed upon the bereaved family’s wishes on Friday. “I have been feeling sorry to my family for I could only give them pain.”

In the five-sentence note, he also asked to be cremated and have his ashes scattered on his parents’ graves.

Park had been mayor of South Korea’s capital city since 2011. His sudden disappearance and death came shortly after a sexual harassment claim was filed against him by a former secretary.