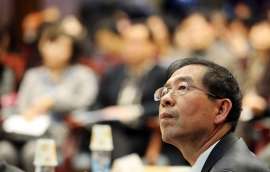 Seoul Mayor Park Won-soon was found dead Friday, according to police, in what appears to be one of the country’s highest-profile suicides in recent history.

The body of Park, 64, was found near the gate Sukjeongmun at the mountain Bugaksan in Seoul, at 12:01 a.m., about seven hours after he was reported missing.

Park is the first Seoul mayor to die while still in office.

The exact cause of his death remains under investigation. Whether an autopsy will be performed is under discussion between police and the bereaved family.

“There were no suspicious circumstances surrounding the death to deem that he was murdered,” a police official said Friday.

His bag, water bottle, cellphone, pens and business cards were found along with his body at the site. A suicide note was found at his home.

The Seoul Metropolitan Government said Friday morning that a five-day funeral service will be held out at Seoul National University Hospital, where his body was taken.

A memorial altar was to be arranged for the public in front of City Hall the same day. Condolence calls will be available from 11 a.m. on Saturday.

Seo Jung-hyup, first vice mayor for administrative affairs, became acting mayor and said he will make sure the city administration stays on track, while tendering his condolences during a press conference held at City Hall.

“The administration will be firmly continued without a halt in accordance with Mayor Park Won-soon’s philosophy that sets priority on safety and welfare,” he said. Seo will take the office until a by-election to be held April 7 next year.

A note of will that Park left on his desk at home was revealed upon the bereaved family’s wish.

“I’m sorry to everyone. I’m grateful for all the people who I shared my life with. I have been feeling sorry to my family for I could only give them pain. Please cremate and scatter (the ashes) on my parents’ graves. Bye all.”

A sexual harassment claim was filed Wednesday against Park from a former secretary. On Thursday, the mayor called in sick and canceled everything on his official schedule for the day.

His daughter filed a police report at 5:17 p.m. Thursday, saying he had “left home four to five hours ago after leaving words like a will, with his phone currently off.”

More than 770 police officers, six drones and nine rescue dogs were mobilized to locate Park, searching areas around his home and nearby the temple Gilsangsa in Seongbuk-dong in Seoul, where his cellphone signal was last detected.

The mayor left his home in Gahoe-dong at 10:44 a.m., wearing a black cap, black trousers and a dark jacket with a backpack. The last time he was spotted in security camera footage was as he walked across Waryong Park in Seongbuk-dong at 10:53 a.m., police said in a briefing.

Police confirmed that a complaint had been filed against Park, but refused to give any further details. The case is expected to be dropped as is typically done when the accused person is deceased.

Local reports said the secretary accused Park of making physical contact several times since she began to work with him in 2017. They said she submitted messages that she had exchanged with Park via the Telegram service to police as evidence.

Park, elected mayor of the South Korean capital in 2011, was in his third and final term.

A member of the ruling Democratic Party of Korea, Park was regarded as a potential presidential candidate for the 2022 election.

A former human rights lawyer and a legendary civil rights campaigner, Park made a public appeal for human-centered policies and equality, such as making efforts to curb soaring housing prices in Seoul and to strengthen welfare programs for the youth as well as the elderly.

Park is survived by his wife, a son and a daughter.