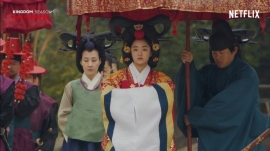 A scene from “Kingdom” shown in “Explore Korea” (KTO)

The Korea Tourism Organization released a promotional video titled “Explore Korea,” made in collaboration with Netflix, using a compilation of clips of Korea shown in films and dramas on the global online streaming platform.

The approximately 90-second clip was released Monday through the KTO’s YouTube channel. The clip, a compilation of scenes from Netflix original programming, shows the history, food and tourist attractions of Korea, along with local lifestyles.

Traditional clothing and palace scenery of the Joseon Dynasty are shown through clips of “Kingdom,” while scenes from “Chef’s Table,” “Somebody Feed Phil” and “Street Food: Asia” feature the culinary arts of Korea.

“We will strengthen our digital marketing and video-tour contents through the likes of K-drama and K-movie in order for 100 million Hallyu fans around the world to indirectly experience traveling in Korea amid the COVID-19 situation,” said Kim Young-hee, head of Hallyu Tourism Team at the KTO under the Ministry of Culture, Sports and Tourism.

Netflix has added “Explore Korea” as a search category to make the original contents featured in the clip accessible to its users.