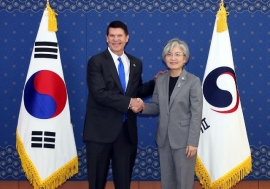 South Korea and the United States exchanged broad ideas about a US initiative to diversify global supply chains away from China last year, but the discussions remained conceptual, a diplomatic source said Thursday.

The remarks came a day after Keith Krach, undersecretary of state for economic growth, energy and the environment, said that he and South Korean officials talked about the Economic Prosperity Network (EPN) initiative during the allies' Senior Economic Dialogue (SED) in Seoul in November.

Krach has been spearheading the US effort to promote the EPN, seen as a scheme to break China's global dominance, in the midst of an intensifying rivalry between Washington and Beijing over regional primacy in various fields, including security and technology.

"The expression, EPN, itself has surfaced only recently, but its concept and broad ideas related to economic security were discussed at the SED in November," the source told Yonhap News Agency on condition of anonymity.

"But there wasn't an agreement or anything from the discussions. The ideas appeared to remain sketchy, and we are just watching the developments at this point," he added.

During Wednesday's teleconference organized by the Asia-Pacific Media Hub of the US State Department, Krach said that the EPN consists of like-minded countries, companies and civil societies that will operate under the same set of "democratic values" -- in an apparent reference to operating principles that China could balk at.

Washington's push for the EPN appears to have picked up pace as the COVID-19 pandemic has offered a chastening reminder for the United States that has relied heavily on China-based supply chains for the production of such crucial items as face masks and ventilators.

The initiative has also put many countries, particularly US allies and other partner countries, in a tricky diplomatic position amid concerns that it could lead to a challenging strategic choice between the two major powers. (Yonhap)