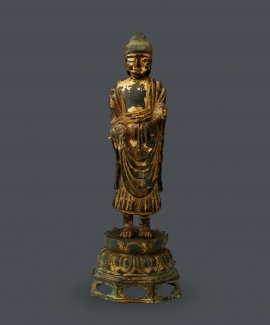 The Kansong Art Museum -- a private museum in Seoul that has collected valuable artifacts since the Japanese colonial era -- has put two state-designated treasures up for auction.

The Buddhist sculptures are the first items to be sold by the museum in its 82-year history. The trading of state-designated cultural treasures is also a rare occasion in the auction market.

Founded in 1938 as the country’s first private museum, the Kansong Art Museum is a point of cultural pride in Korea.

Its founder, a wealthy merchant named Kansong Chun Hyung-pil (1906-1962), collected valuable artifacts during the Japanese colonial era to stop them from being taken out of the country after Korea lost its sovereignty.

The museum began to suffer from financial difficulties after the founder’s descendants inherited it. The museum is currently run by director Chun In-keon, a grandson of Kansong. He assumed the post after Kansong’s eldest son, Chun Sung-woo, died in 2018.

“It was a hard decision for the museum to put up our valuable artifacts for auction,” an official from the museum told The Korea Herald Thursday on condition of anonymity. “The financial issue has been a chronic problem after the founder, Kansong, died in 1962. We cannot discuss the details of the finances because it is a family issue. But the recent issue of inheritance taxes on the artifacts fueled the decision.”

The museum chose an auction instead of private sales in order to find an owner who could preserve the treasures better than the museum.

“We offered a condition to the auction firm to consider national museums first before private entities, if possible,” the official said.

The museum also signaled that two other Buddhist sculptures might be auctioned at a later date.

Selling the two treasures at the auction is viewed as a tragedy within the art industry, given the museum’s role as a symbolic organization that kept artifacts out of the hands of the Japanese colonialists during the colonial period. “It is sad that we are losing part of the history of Kansong Art Museum,” a person in the cultural heritage industry told The Korea Herald, speaking on condition of anonymity.

“It is our third or fourth time selling a designated cultural heritage since 2005,” said Son Yee-chan, a PR official from K-Auction. “Although we are expecting the bidding to start at 1.5 billion won for each treasure, which is subject to change, we are not sure at what price they will be sold. It depends on the collector to evaluate the value of the artifacts.

“But the fact that the treasures were owned by the Kansong Art Museum will be reflected in the sales price. Because for ancient art collection, previous ownership is a key factor in valuation,” Son added.

Despite the regrets from within the industry, the government says it cannot interfere.

“We cannot intervene in private museums selling their cultural properties at auction,” said Ban Ji-yeon, an official from the Cultural Heritage Administration. 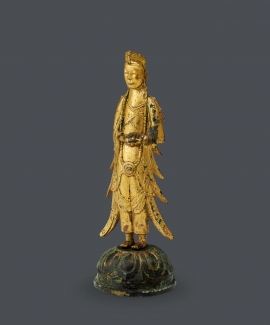 Also, the government points out, inheritance taxes are not levied on all properties held by the Kansong Art Museum.

“Under the current law, inheritance taxes are not charged on cultural properties that are designated by the national government or regional governments,” Finance Ministry official Beon Gwang-wook said.

The museum maintains that the inheritance tax is one of the major reasons for its decision.

"Only around 40 of our artifacts are designated by the government,” the museum official said.

Since 2018, the government has provided 4.7 billion won to the Kansong Art Museum to support the conservation of the designated cultural properties it owns. The Cultural Heritage Administration added that it had provided 250 million won for a project to preserve properties at the museum that had not been so designated.

The government provides financial assistance to private museums to build storage facilities for state-designated cultural properties, such as national treasures, if the owners cannot afford it. It also conducts inspections every five years and offers financial support to private museums if artifacts need to be restored.