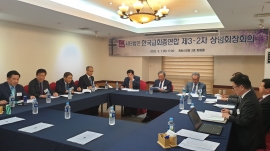 Members of the United Christian Churches of Korea announce Korean Church Worship Restoration Day at a meeting on May 7.(Yonhap)

The United Christian Churches of Korea have proclaimed May 31 “Korean Church Worship Restoration Day,” and are aiming for 80 percent attendance at Sunday services throughout the country on that day. Two churches in Incheon, Palbock Church and Onlove Church, had a scare recently when a cluster of infections traced to Seoul’s Itaewon area affected two church members and led to around 780 people being tested for the virus. The churches followed social distancing guidelines and asked churchgoers to wear masks.

“After the UCCK decided to announce Korean Church Worship Restoration Day, the COVID-19 spread that started from a gay club in Itaewon was very concerning, but the churches that were in danger of contamination stuck with prevention protocols so there would be no additional infections. The efforts of these churches gave us faith that everyone can return to their everyday lives,” said the UCCK in an announcement May 8.

On Thursday the UCCK followed up its announcement, saying it had not meant to single out the LGBTQ community by using the term “gay club,” and told the participating churches to adjust the terms.

“Of course, bringing back the church members doesn’t mean we will not have social distancing measures. We know the expected turnout will be less than 80 percent, but goals are meant to be something to head toward,” said the Rev. Kim Young-min of the UCCK. He also clarified that the goal was 80 percent of people who went to church before the spread of COVID-19, not 80 percent of all church members, saying the two numbers differed greatly.

“The post-COVID-19 era will bring many changes. Korean churches entered a period of stagnation, but through the event on May 31, we plan to bring revival to faith and prepare for the coming times,” said Kim.

On May 31, when Christians celebrate Pentecost, a feast that falls on the seventh Sunday after Easter and celebrates the descent of the Holy Spirit on the disciples, churches taking part in Korean Church Worship Restoration Day will arrange welcome events for their members.

As numerous people are expected to head to church, the UCCK sent out guidelines requiring all participating churches to disinfect their premises constantly and to refrain from having small group meetings outside of Sunday services. 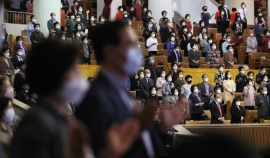 Many megachurches were already following most of the guidelines.

“We follow all the necessary measures such as hand sanitization, going through heat scanners, wearing masks, among others,” said Park Myung-chul, a representative of the Yoido Full Gospel Church.

“Each seat in the main chapel has a sticker already placed on it. The chapel can normally fit 12,000, but we only accepted 2,500 people who registered in advance,” said Park. “It’s uncomfortable, but it’s necessary. Around two-thirds of the people are still having services online,” he said.

Another megachurch, the 6,500-seat Sarang Church, only took in 1,500 to 1,800 people. It considers May 31 the turning point in bringing its members back to church and is planning to take part in Korean Church Worship Restoration Day.

Some churches have scheduled additional service times as a way of spreading out the crowds they expect.

Kumnan Methodist Church made around one-third of its seats available for offline services on Sunday, but decided to offer one additional service to accommodate more people.

Onnuri Church also added services, moving some of its Sunday services to Saturday in an attempt to limit the numbers at each service. Furthermore, no newcomers are allowed until further notice and members have to preregister online to receive the bar codes they need to enter the building.

Churches said their members were still wary of offline services.

A Grace and Truth Church official pointed out that of the 600 seats made available in its 2,500-seat chapel, only 400 or so were occupied as people are still nervous about COVID-19. Churchgoers must wear masks and disposable gloves at all times while in church.

“Because of the Itaewon incident, we didn’t fill the 400 seats we’d prepared since many people seemed cautious still,” said the head of the administrative office for Somang Church, which also had fewer offline worshippers than expected.

While some of its Sunday services were filled by elderly people, the Somang Church official said, only half the seats were filled at its young adult service.