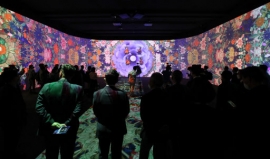 If you’ve ever wanted to experience life in Joseon society, the National Museum of Korea’s Immersive Digital Gallery, which opened Wednesday, gives you the chance.

Visitors can join a Joseon king’s procession, become a researcher restoring cultural heritage and place their photos on a shelf painting from the Joseon dynasty.

“The world’s leading museums are quickly adopting new technologies. The Korean government also has been working on adopting these new technologies at our cultural facilities since last year and this gallery is our first result,” Park said during a preopening event held at the National Museum of Korea in Seoul on Tuesday.

“Back in 1959, humans could see the far side of the moon that was not visible with the naked eye (from the Earth) and this was possible due to the advances in technology. Immersive digital content will become your rocket,” Park added. He also noted that the government attempted not only to apply the technology to cultural heritage but also put an effort into creating cultural content that can deliver the history and stories behind each item.

The new gallery is a result of collaboration between the National Museum of Korea and the Korea Creative Content Agency.

The government also announced that it planned to open additional exhibition halls using the new technologies in its three regional museum branches in Chungju, North Chungcheong Province, Gwangju and Daegu before the end of June.

“Yesterday was World Museum Day. This season is meaningful for museums and we are glad that we could reopen the museum and introduce Immersive Digital Gallery,” said Bae Ki-dong, director-general of NMK, at Tuesday’s event.

Lee Tae-hee, a curator of the NMK, emphasized how the new technology made it possible for visitors to enjoy cultural heritage in greater depth.

In Immersive Digital Gallery 2, a screen filled with the painting “The City of Supreme Peace” from the Joseon era greets the visitors. The painting portrays the ideal peaceful life that people dreamed of.

“There are over 2,100 people in this painting. Traditional paintings like this are sensitive to light and cannot be displayed to the public for more than two days. By showing the painting using 8K Ultra HD technology, audiences can enjoy the work anytime,” Lee Tae-hee, a curator of the NMK said.

The painting is also unique as the audiences can touch the screen and play games on it.

In the same gallery, there are also small virtual reality rooms where people can look at the museum’s storage rooms and also experience what it is like to restore cultural heritage.

“These museum storage rooms and labs are rooms that are difficult for us to open to the public for security reasons, but VR technology made this possible,” Lee added. 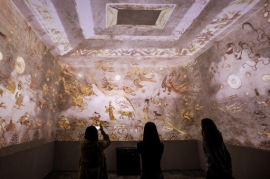 Visitors view the Deokheung-ri Tomb, one of three Goguryeo-era tombs that have been re-created at the National Museum of Korea’s Immersive Digital Gallery 3, during a preopening event on Tuesday. (Yonhap)

The finale of the event of the evening was held in front of the “Gyeongcheonsa Temple Pagoda.” A media facade lighting technology was used to present layers of individually controllable lights on the pagoda, which was used as a gigantic screen. The museum added that it used a 3D scanner to scan through the pagoda to make this lighting show possible. A tale of “Journey to the West” was also projected on the pagoda on Tuesday. The pagoda lighting show will be presented every Wednesday and Saturday at 8 p.m.