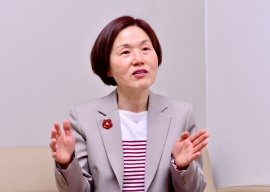 Professor Kang Seon-jou at the Korea National Diplomatic Academy speaks during an interview with The Korea Herald at her office in Seoul on Friday. (Park Hyun-koo/The Korea Herald)

Seoul has long been in a tricky position as a result of the great-power contest between Washington and Beijing.

South Korea has preferred to maintain a balance between its longtime security ally the US and top trading partner China, through hedging -- or, arguably, by avoiding taking sides. That way, it was on relatively good terms with both superpowers.

But that could change. With the coronavirus pandemic fueling an already serious tug of war between the world’s two largest economies, Korea could be pressured to pick a side, said Kang Seon-jou, professor of trade and economic studies at the Korea National Diplomatic Academy.

“With the US-China rivalry expected to intensify, Korea could be forced to choose between the two in the post-pandemic era,” Kang told The Korea Herald in an interview last week. “In this environment, Korea needs to consider what its national objective is, which requires a national consensus.”

If that national objective doesn’t require taking sides, Seoul could also consider alternatives. “It could band together with other nations, such as European countries, Australia and Canada,” said Kang. “Seoul needs a diplomatic system that can relieve some of the pressure of having to choose.”

According to Kang, Seoul’s conundrum won’t disappear, as both the US and China will continue to play influential roles in the post-pandemic international order. This holds true even though the two superpowers are both criticized for their leadership shortfalls in handling the global crisis, and for playing the blame game over the origin of the coronavirus outbreak.

“Both countries were hit hard by the coronavirus, but the US and China are major economic and military powers. That cannot easily vanish,” the professor said. “The two will continue to fiercely compete for power and influence.”

But who comes out on top when the dust settles will depend largely on two things, she said.

“The first is which country can contain the virus and emerge from the outbreak fast and well. The second is which one can manage the economic fallout and normalize sooner,” she said, pointing to the race between China and the US to discover a coronavirus vaccine.

“A vaccine discovery is the key because it is viewed as an end to the pandemic that could ensure citizens and businesses can resume their economic activities without concern. The country that develops a vaccine first will claim geopolitical dominance and restore its lost leadership and influence,” she said.

Domestically, a vaccine victory is much needed for US President Donald Trump, who is accused of mishandling the coronavirus outbreak, with just months to go before the presidential election in November.

It’s not only the US and China, but countries around the world, that are shoveling in huge sums and competing in the search for a vaccine, when the task requires international coordination.

This lack of an “international response to the global crisis” is a problem, she stressed.

“The spread of COVID-19 crosses borders, and almost every country is suffering. But the response to it has been, unfortunately, ‘each country on its own,’” she said.

In past global crises, it was the US that sat at the head of the table, directing coordinated global efforts since the end of World War II in 1945. As the chief architect of the postwar liberal international order, it has not only established and largely led the multilateral world, but also sustained it by contributing massive amounts of funds.

“But now the US, especially with Trump’s ‘America First’ policy, has no interest in leading the global initiative,” said Kang. “It costs a lot of money to maintain that leadership. With the US’ waning capacity to contribute, especially since the 2008 financial crisis, and with many believing globalization has hurt its middle class, the country lost incentives to manage the order it created,” she said. “Meanwhile, China is stepping up to fill the void left by America’s retreat.”

Could this mean the demise of globalization and multilateralism, as many worry, and the revival of the “walled cities” that Henry Kissinger, former US secretary of state, called an anachronism?

While the pandemic laid bare the painful downside to the world of open markets and open borders, Kang believes globalization won’t decline but will undergo a transformation.

“It’s true that we are in a globalization crisis. But the countries can’t just switch from globalization to deglobalization overnight,” she said. “There will be an adjustment to the process.”

Even before the pandemic, the US’ decoupling from China was already on the move as the trade war between the two superpowers had intensified. But with the coronavirus crippling global supply chains, other countries and multinational firms have witnessed the need to restructure and diversify away from China.

But unraveling more than two decades of economic interaction that benefited the countries and their companies is not simple, she stressed.

“The companies have to calculate, on their own, whether it is beneficial to remain in China and cope with the risk, or decide to return to their home country, or perhaps find another country,” she said. “The decision to enter China may have been easier, but deciding to leave and forgo what the country has to offer is not simple."

“Korea also needs to make a decision,” she said. “Will it bring back some or all of its economic presence from overseas? And if so, how much and in which industry will it restructure the supply chain?” she said.

But even COVID-19 could have a silver lining for Korea, she said.

“Korea has received accolades from around the world for its systematic quarantine efforts to tackle the COVID-19 outbreak,” she said. “With its elevated status, there is an opportunity for Korea to play a crucial role in shaping the global order.”

While it will take a while for the global economy to recover to the level seen prior to the pandemic, and for the world to contain the virus entirely, there will be movements under the surface, or perhaps backdoor diplomacy, to establish a new global order.

She urged Korea to step up its game to secure a seat at the table in deciding that order, unlike in 1945 when it had neither sovereignty nor a voice on the global stage.