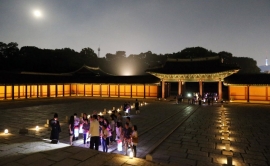 The Cultural Heritage Administration announced Tuesday that it would start holding tours and events at the country’s royal palaces, which have been suspended since Feb. 27 due to the risk of spreading COVID-19.

On Wednesday, the changing of the royal guard ceremony at Gyeongbokgung will be the first event to resume.

Saenggwabang within Gyeongbokgung, where tourists can experience a traditional tea ceremony and enjoy dessert, will be open from May 27 to June 29.

Concerts will be held at Gyeongbokgung every weekend from May 30 to July 12.

More events, including concerts at Changgyeonggung and a chance to taste food from Gyeongbokgung’s royal kitchen, will restart in June.

To observe the social distancing guidelines, Changdeokgung Moonlight Tour participants will enjoy the performance while walking through the palace site instead of gathering in one place. The government added that all visitors’ temperatures would be checked and they were required to wear masks at all times.

The CHA decided to limit the number of visitors at some events. For instance, Gyeongbokgung used to accept up to 6,000 people for its special night visits before the virus broke out but will now only allow 4,500 people.

No detailed information has been released about tickets for the royal kitchen food tasting event.

Meanwhile, the CHA added, on May 7 it resumed the sacrificial rites at one of the Royal Tombs of the Joseon Dynasty in Paju, Gyeonggi Province, with only a small number of participants. The ceremony did not take place in March or April.