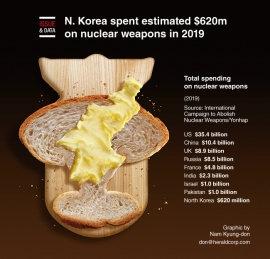 The International Campaign to Abolish Nuclear Weapons, a Nobel Peace Prize-winning organization, made the estimate in a report about the expenditures that nine countries, including the North, made on nuclear development.

The figure was drawn based on a South Korean think tank’s estimate that the North spent 35 percent of its gross national income on its military in 2009, as well as data from Global Zero, another anti-nuclear weapons group, that the North is believed to have spent 6 percent of the military budget on nuclear development in 2011.

Among the nine countries on the report, the US spent the most on nuclear weapons, with $35.4 billion, followed by China with $10.4 billion and the United Kingdom with $8.9 billion. (Yonhap)