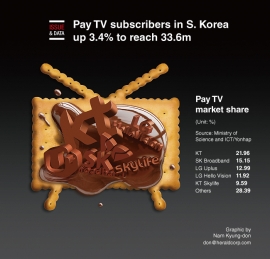 The number of pay TV subscribers in South Korea reached 33.6 million last year, up 1.1 million, or 3.4 percent, from the previous year, data showed.

The figure includes pay subscribers to system operators, satellite broadcasting services and internet protocol television service providers, according to the Ministry of Science and ICT.

Fixed-line and telecom operator KT ranked No. 1 in market share with just under 22 percent, or over 7.3 million subscribers, followed by SK Broadband with 15.1 percent and LG Uplus with around 13 percent. (Yonhap)