[Graphic News] Number of Catholics edges up 0.8% in S. Korea 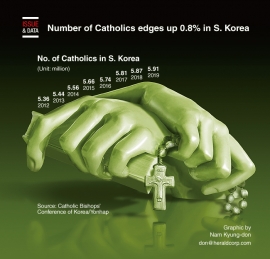 The number of Catholics in South Korea rose slightly last year as the religion has experienced a slowdown in its growth in recent years, data showed.

According to data by the Catholic Bishops’ Conference of Korea, 5.91 million Koreans were registered with 16 dioceses in the country as of end-2019, up 0.8 percent, or 48,000, from a year earlier.

The on-year growth has been hovering around 1 percent for the past decade and dropped to a 0.9 percent gain in 2018. Only in 2014, when Pope Francis visited the country, the domestic Catholic Church saw its believers increase 2.2 percent from a year ago.